A Greek-operated oil tanker seized off Togo was tracked down on Wednesday off the coast of Nigeria under the control of pirates, the ship’s operator and Togolese authorities said.

The seizure early on Tuesday of the ship, which is operated by Golden Energy Management, underscored the growing risks to ships in the Gulf of Guinea, where piracy is rising but still not as common as off the coast of Somalia.

“The vessel is presently sailing off the coast of Nigeria under the control of pirates who have the intention to steal the cargo,” Golden Energy Management said in a statement.

The firm said they were in touch with a French naval ship that was nearby.

The crew are believed to be in good health and unharmed, the statement added. The Greek coastguard said there were 24 people on board, none of whom were Greek.

Colonel Inoussa Djibril, spokesman for the Togolese army chief of staff, confirmed the ship had been located on Wednesday morning in Nigerian waters with pirates on board.

According to the International Maritime Bureau’s website, there have been eight attacks and attempted attacks off the coast of Togo since January.

U.N. and African Union officials on Monday decried the deaths of two Somali journalists and demanded that the Somali government put a stop to the killings.

“The Somali authorities must institute investigations into these killings with a view to bringing the perpetrators of these heinous crimes to justice,” said a top African Union official, Boubacar Diarra. The African Union military force “is ready to provide any assistance it can to help with such investigations,” he added.

A man dressed in a high school uniform shot and killed Yusuf Ali Osman, a veteran reporter who has been serving as the director of Somalia’s Information Ministry, said Bashir Khalif Ghani, an editor with the state-run Radio Mogadishu.

Osman was killed near his home while on his way to work, he said. The attacker fled the scene.

A second Somali journalist was killed on Sunday after government troops opened fire on each other at a sports stadium. The audience fled in panic. A stray bullet struck and killed Mohamud Ali Yare, said Abdirashi Abikar, a journalist colleague.

“He died after several bullets struck him. It was a shocking killing,” Abikar said.

Somalia and Syria have been the two most dangerous countries this year for journalists. In Somalia, the killings of media workers often happen in the government-controlled areas that journalists often consider to be safe.

Despite government’s promises of prosecution of perpetrators for media workers killings, yet criminals walk freely without facing justice.

“We were appalled by the murder of Mr. Osman. It was a brutal killing and we condemn it,” Abdiqadir Hussein Mohamed, Somalia’s information minister, said in a statement. “He was a veteran and diligent director who helped Somalia through difficult years.”

The U.N. representative to Somalia, Augustine Mahiga, condemned the killings and underscored the fact that no attackers of any journalists in Somalia have been arrested for trial.

“I send my deepest condolences to their families and to all Somali media professionals, who for too long have seen their colleagues targeted, injured and assassinated without a single perpetrator being brought to justice,” Mahiga said.

Mahiga said that the U.N. has repeatedly called for full and independent investigations into what he called “unacceptable and cowardly acts.”

“This culture of impunity must end. We must not allow the fundamental freedoms that a free press represents to be compromised by those willing to use violence to serve their personal agendas. This is a decisive time in the political process and the work of media needs to be protected so that the Somali people are fully informed,” Mahiga said.

None of the people involved in the nine media workers deaths this year have been prosecuted. 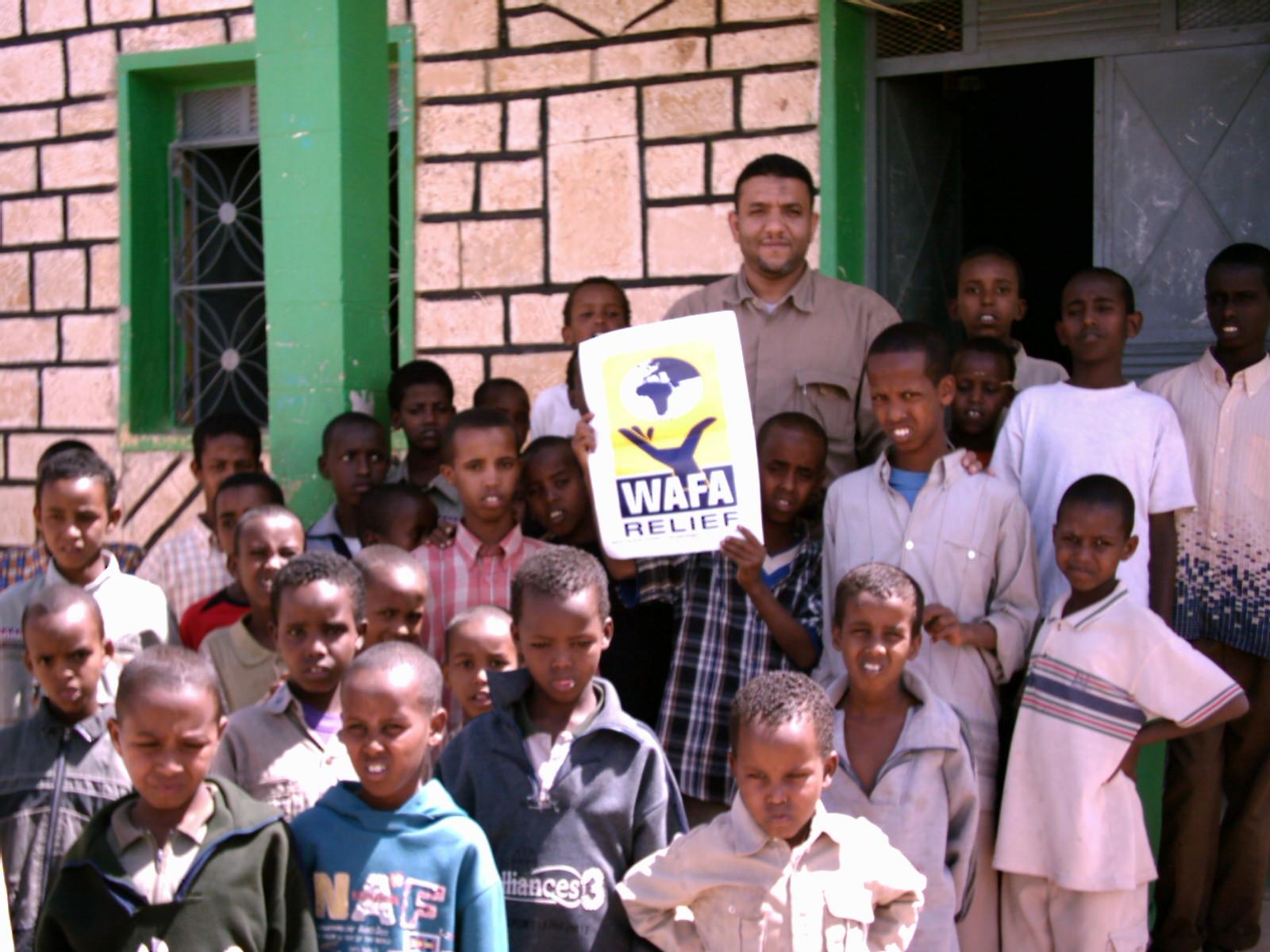 In a crowded classroom in the capital of Somalia, Mogadishu, children shout out words in English as their teacher points with his stick to a blackboard.

Like many schools in Mogadishu and elsewhere in the country, resources are extremely tight and children are used to making do with what little books, pencils and papers their teachers can find.

But unlike other school children who go home in the evening to spend time with their families and play with friends, almost all of these children stay in the centre, sleeping and eating alongside a growing number of students joining their ranks.

The children are all orphans or children who have lost contact with their parents and relatives during Somalia’s protracted civil war.

Biri Centre, set up in 2010, is one of a handful of locally run charities working to help the children, many of whom are used to living on the streets. There are currently almost 800 students registered at the centre.

When Somalia’s government was ousted in 1991 and the country spiralled in civil war and chaos, orphanages and child care centres went the way of many other public facilities in the capital. They were abandoned and left to disintegrate and collapse.

In the two decades of conflict that followed, the number of children left without one or both parents has ballooned, producing a generation of war orphans left for relatives to care for or to fend for themselves if they have none.

As Nasra Abdulah Yasin, programme manager at the school explains, without the financial support of a family, most face a very uncertain future.

“Our main objective is to gather all these children together and give them schooling and care to build their future. If we didn’t help these children to have a chance in life we would be creating a huge burden for them and the state so we set up the centre to try and deal with the large number of children who have lost their parents,” she said.

Teachers at the school try their best to match the education the children would get at a normal school and classes in maths, science and languages are taught alongside singing and play acting.

But with the number of children referred to the centre growing by the day, Yasin says the teachers and the managers of the centre have tried to raise its profile to help bring in more funds. Currently they only receive donations from the local community in Mogadishu but hope to expand that to international donors over the next few months.

“We need help from Somalis and Muslims all over the world. We’re asking them to donate to the charity to help these children at the Biri Centre,” Yasin said.

The United Nations children’s organisation UNICEF estimated in 2009 — in the most recent available data that there are over half a million orphans in Somalia. The figure is likely to have risen significantly since then with ongoing violence and last year’s debilitating drought. 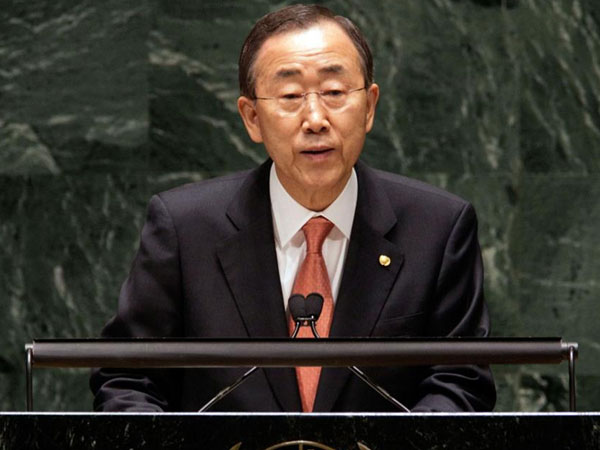 The U.N. secretary general said on Friday he was humbled by the plight of Somalis fleeing famine, whose security has deteriorated in recent weeks after attacks that forced aid agencies to suspend some operations.

Ban Ki-moon visited a refugee camp in Dadaab refugee complex in the north of Kenya near Somalia.

Ban urged all Somalis to support a political roadmap agreed earlier this year that is meant to lead to parliamentary and presidential elections next year and end a string of fragile transition governments.

“I have strongly urged the TFG government (Somalia’s Transitional Federal Government) to do all their efforts to first implement road map and establish their institutions in liberated areas in central and southern Somalia, and enhance their good governance, and enhance their capacity, institutional capacity and security capacity,” he said.

The U.N. chief said Somalia has a window of opportunity to restore stability after two decades of war, and urged Kenya to do all it could to help Somali refugees.

Earlier that day Ban Ki-moon made the first visit to the anarchic Horn of Africa country by a U.N. chief since 1993 and pledged to open a U.N. political office in the war-ravaged capital Mogadishu in January.

The rebel al Shabaab group in a statement said it did not recognise the United Nations as a legitimate body to regulate Somali affairs. It denounced Ban’s visit as a “futile attempt aimed at boosting the drained morale of the African Union soldiers in Somalia.”

Ban, who was accompanied by Nassir Abdulaziz Al-Nasser, president of the U.N. general assembly, said a quarter of a million Somalis still faced famine in southern Somalia.

“I have strongly condemned the attack on the United Nations and NGO offices by al-Shabaab. This is an attack on those people who are trying to help the most vulnerable people of this country. This is totally unacceptable, inhumane, we have to help these people,” he said.

The refugee camp in Dadaab is the world’s biggest refugee camp. Ban Ki-moon met Somali refugees at the camp and later said he was deeply saddened by the stories he heard. One family told him how they lost two children fleeing Somalia.

“This is quite humbling, I am very sad, my heart and mind are crying inside. I have heard so many concerns and difficulties from refugee camp leaders. My meeting with one family, this is really humbling and sad, they lost two children while coming to the refugee camp,” Ban said.

The U.N chief reassured refugees at the Dadaab camp that humanitarian assistance remained a top priority for the United Nations, despite an economic crisis.

“The world is going through an economic crisis at this time. There is a concern that this humanitarian assistance is now reducing. But we are very much committed, I am talking to world leaders, rich countries and business leaders and philanthropists that they should continue, they should not cut aid to refugees and other displaced persons,” he said.

In Mogadishu, Ban said his visit was to show solidarity with Somalia’s people and to pledge continued international support as government and African Union troops fight Islamist rebels and politicians work towards elections next year.

The U.N. Political Office for Somalia (UNPOS) has a few political officers on the ground in Mogadishu but high-level officials are based in Kenya’s capital Nairobi due to security concerns.

Kenya’s Dadaab refugee complex is home to some 440,000 Somalis who have fled war and famine.

When Somalia’s famine broke out in July, aid agencies rushed in celebrities and journalists as numbers in Dadaab’s three camps ballooned. This time, in contrast, Ban’s movements were severely restricted.

Security has been tightened sharply following the kidnapping of two Spanish aid workers by gunmen linked to Somalia and a wave of low-level bomb blasts in the camps, some targeting U.N. aid convoys and police.

Relief groups have suspended non-critical operations. One refugee told Ban camp dwellers had organised their own security patrols in some areas. 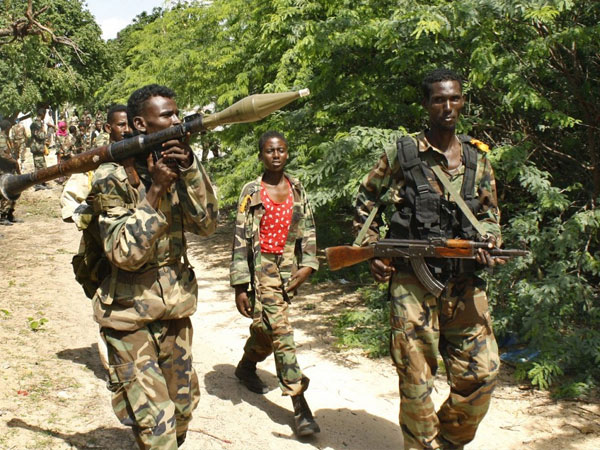 The government of Somalia is suffering from a major setback as Mogadishu the country’s capital is witnessing one of the fiercest fighting ever recorded in the city.

The AU forces are reported to have used tanks and heavy artillery. The government had declared that it had taken control of the city after Al-Shabab withdrew their forces in August.

Reports of casualties are yet to be disclosed as the fighting continues to occur in the northern district of Karan and Huriwa on Thursday December 8, 2011. Al-Shabab attacked a camp run by the military in Wadajir to the south of Mogadishu on Wednesday.

That area had previously been considered relatively safe. Since the Islamists made their “tactical withdrawal” from Mogadishu, there have been several suicide attacks in the city.

The most recent happened on Tuesday in the Hodan district – at least five people were killed. Earlier this week al-Shabab announced that it was changing its name to Imaarah Islamiya.