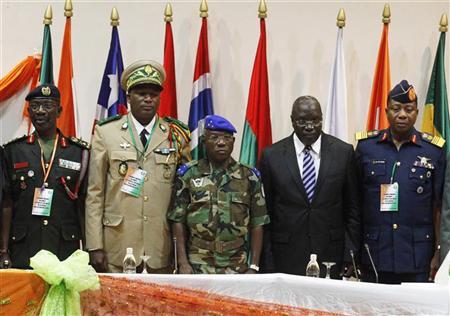 West African military chiefs have secured troop commitments from three nations for their planned Mali intervention force, despite the mission still lacking an invitation from authorities in Bamako and backing from the United Nations.

Nigeria, Niger and Senegal will provide the core of a 3,270-strong force whose mission would initially be bolstering Mali’s fragmented army and stabilising political institutions, and then tackling the rebel-held north if talks fail, officials said after military chiefs met in Ivory Coast.

Mali plunged into crisis after a March coup ousted the president. Separatist and Islamist rebels took advantage of the instability to seize the northern two-thirds of the country, creating a void that regional countries say an outside force may have to fill.

African leaders have warned of an “African Afghanistan” due to the presence of al Qaeda cells and foreign fighters but U.N. Security Council diplomats say the council is not yet ready to agree the African Union’s request to back military intervention.

“The hope is that we will be welcomed as brothers in arms,” he said late on Saturday, underscoring potential problems with Mali’s military, which wants outside help to fight rebels but has reacted angrily to ECOWAS criticism and sanctions impoased after its power grab.

Diplomats say the U.N.’s reticence to swiftly back the force is due to the lack of a clear plan to tackle the crises in both the capital and the north.

Mali’s interim president has not returned since seeking medical treatment in Paris after he was beaten up by a mob that broke into his office. After security forces failed to precent the attack, some diplomats say President Dioncounda Traore is reluctant to return until a regional force is in place.