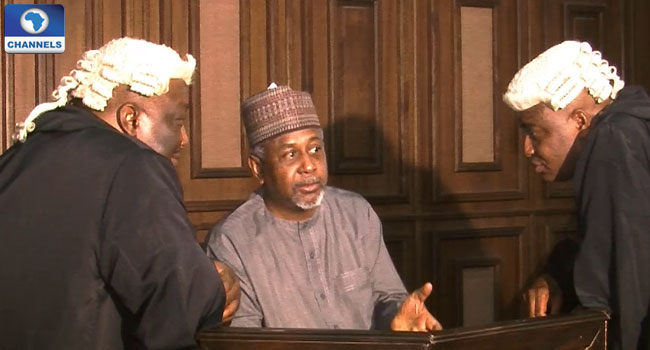 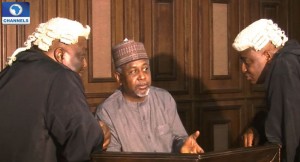 The Nigerian government has agreed to consolidate the criminal charges filed against the former National Security Adviser, Colonel Sambo Dasuki (rtd) and others.

They are standing trial before two different High Courts of the Federal Capital Territory Judiciary.

This is coming barely 24 hours after the ECOWAS court ordered the Federal Government to release Dasuki from the indefinite detention he had been kept in since December 2015.

The decision to consolidate the charges followed a complaint by the counsel to the former NSA, Mr Joseph Daudu.

Mr Daudu had argued that putting him on trial in two different courts on the same issues and subject would prejudice and cause him double jeopardy.

At the resumption of the trial, counsel to the Federal Government, Mr Rotimi Jacobs and that of Dasuki, Mr Dudu agreed before Justice Baba Yusuf to formally write the Chief Judge of the FCT judiciary, Justice Ishaq Bello, to consolidate the two charges in the interest of justice.

The two senior counsel applied to the trial judge, Justice Yusuf to adjourn the matter pending the time the Chief Judge would consider the application for consolidation.

Justice Yusuf obliged the parties and adjourned the case to the October 21, 2016.

Dasuki had been put on trial before Justice Yusuf and another charge was filed against him before Justice Peter Affen both of the FCT High Court on the same issue and subject.

Earlier, the Federal Government gave an indication that it would not immediately obey the ECOWAS court’s instruction to release Colonel Dasuki.

The government asked for time to study the Judgement.

The court on Tuesday ordered the release of Colonel Dasuki, describing the detention as “unlawful and an arbitrary violation of his fundamental human rights”.

The Federal Government had detained and seized property of the former NSA during Goodluck Jonathan’s regime for alleged money laundering and illegal possession of firearms.

Charges were brought against him by the Department of State Services (DSS).

The ECOWAS court also held that investigating Colonel Dasuki for allegedly committing or planning to commit a crime was not enough ground to detain him since December 2015.

However, the Minister of Justice, Abubakar Malami, on behalf of the government insisted that the Federal Government of Nigeria needed some time to study the content of the ruling before acting on it.

The government has also argued that it needed to fully understand the content of the court’s proceedings and judgement before reacting.

Mr Malami said: “We cannot just react. We will first of all study the judgement to understand its content before taking a stand”.

The Attorney General’s views were conveyed to Channels Television on October 5, by his Special Adviser on Publicity, Mr Salisu Isah.

In February, Colonel Dasuki accused President Muhammadu Buhari of being behind his arrest and detention without trial since December 29, 2015.

Dasuki, who spoke through his counsel, Mr Joseph Daudu, claimed that President Buhari unjustly instigated his arrest and detention by the DSS against the bail granted him by three different courts in various criminal charges brought against him by the Federal Government.

In a further and better affidavit filed in support of his application at the FCT High Court, the ex-NSA claimed that the President betrayed his emotion during the Presidential Media Chat when he openly told Nigerians that he (Dasuki) and Nnamdi Kanu would not be allowed on bail because they would jump bail.