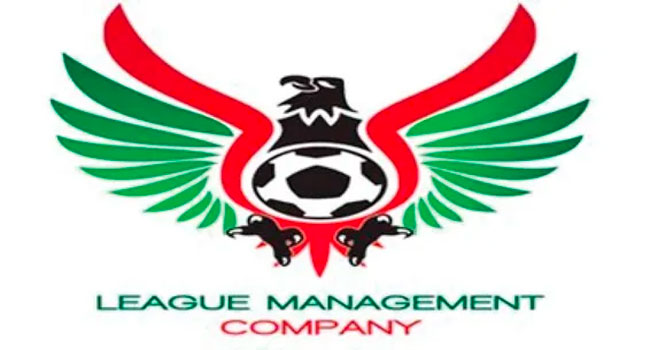 The League Management Company has approved 13 stadiums across the country for the upcoming 2020/21 Nigeria Professional Football League (NPFL) season.

The certification process is part of the broader club licensing regime, and the LMC explained that the 13 approved grounds met minimum requirements to host games.

Another 11 were recommended for varying degrees of upgrade and repair works before they can be certified.

The rest were listed as requiring repairs varying from relaying of new synthetic grass, regressing, provision of floodlights, television camera platforms, and upgrade of changing rooms as well as provision of additional exit and entry gates among others basic requirements.

The rest are Lafia Township Stadium, Ifeanyi Ubah Stadium, Nnewi, and Fufure Stadium, Yola which will be inspected for certification after construction work has been completed.

The League Management Company has communicated the development to the clubs in a memo that reads:

“In line with the CAF Circular of July 26, 2020, on stadium infrastructure among others, which was forwarded to you and the need to meet up with the requirements of high-quality television production by our new partners, the LMC has reviewed various reports submitted on the state of our stadia across the country”.

It further explained that the inspected stadiums have been categorised into two; A and B with Category A representing those that have been approved to host NPFL matches for the season having met the minimum requirements while Category B includes those requiring upgrades.

“We have made notes on the areas/repairs needed to be done before recertification”, the memo stated.

Clubs whose home or preferred grounds have been recommended for upgrade would have to choose from any of the certified grounds if they are unable to complete the upgrade before the commencement of the season. 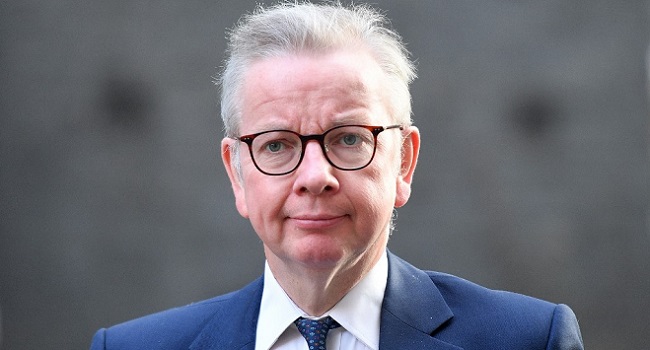 Plans to allow the phased return of fans to sporting venues in England from October 1 will be put on hold due to the sharp rise in coronavirus cases, ministers said on Tuesday.

A number of pilot test events, in which capacities have been capped at 1,000, have taken place and it was hoped venues would be allowed to welcome more spectators from the start of next month.

But Cabinet Office Minister Michael Gove said a “mass reopening” would not be appropriate at the current time, dealing a devastating blow to sports bodies struggling with the financial fallout of Covid-19.

“We were looking at a staged programme of more people returning — it wasn’t going to be the case that we were going to have stadiums thronged with fans,” Gove told the BBC.

“We’re looking at how we can, for the moment, pause that programme, but what we do want to do is to make sure that, as and when circumstances allow, get more people back.”

Professional sport, including the Premier League and Test cricket, has largely been played behind closed doors since it returned following the coronavirus shutdown earlier this year.

Sports chiefs have warned of crippling losses due to the loss of income from gate receipts and hospitality.

The leaders of more than 100 sports bodies have reportedly written to Prime Minister Boris Johnson to ask for emergency funding, warning of “a lost generation of activity”.

Premier League chief executive Richard Masters earlier this month warned it was “critical” to get fans back into stadiums soon, with clubs facing enormous losses.

“It’s clearly very disappointing,” RFL (Rugby Football League) chief executive Ralph Rimmer told the BBC. “We spoke with the secretary of state last week who was very supportive in developing a road map back to full crowds and the pilot schemes were the first step in that.

“The push on the 1,000 crowds would be disappointing if that was to be pushed backwards.”

Julian Knight, who chairs the House of Commons digital, culture, media and sport committee, expressed his concern at the announcement from Gove.

“If we don’t find a route map with smart solutions to allow sports and live events to gradually reopen, we risk decimation of our sporting and cultural infrastructure,” he wrote on Twitter. 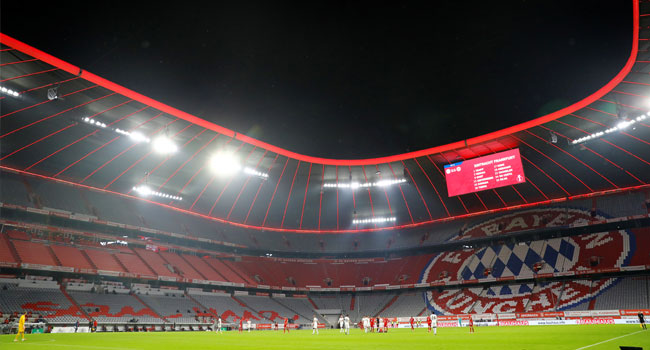 Limited numbers of football fans will watch matches in stadiums across Germany for the first time in six months this weekend when the first round of the German Cup kicks off.

There is an odd number of 31 matches spread over the weekend as holders Bayern Munich will only play fifth-tier side FC Dueren in mid-October.

The Champions League winners have been granted extra rest following their victory over Paris Saint-Germain in Lisbon on August 23.

There are no all-Bundesliga matches, giving smaller clubs the chance to claim a big-name scalp.

Potential giant-killers are third division side Duisburg who host Ruhr neighbours Borussia Dortmund and fourth-tier team Schweinfurt, who are up against Schalke 04.

Amid the coronavirus pandemic, the German FA has permitted each host club to admit a set number of home fans — traveling supporters are banned — providing the local health authority gives permission.

“38,677 spectators are allowed to watch the German Cup this weekend – unfortunately, spread over 31 matches,” German daily Bild pointed out.

The result is huge regional differences in numbers of spectators allowed with some games to be played behind closed doors.

In eastern Germany, where the rate of infection remains low, 10,000 fans are expected to watch Dynamo Dresden play Hamburg on Monday.

Likewise, a crowd of 7,500 can see Hansa Rostock against VfB Stuttgart on Sunday.

However, in southern Germany, which has been more affected by the pandemic, second division Nuremberg host Champions League semi-finalists RB Leipzig behind closed doors.

The same applies to 1860 Munich’s home tie against Eintracht Frankfurt and seven other first-round games.

One example is fourth-tier side VSG Altglienicke, who opted to play at Bundesliga side Cologne and are relishing the trip.

“It’s quite exciting,” Altglienicke coach Karsten Heine told the newspaper the Berliner Morgenpost, with his squad looking forward to playing at Cologne’s stadium “for perhaps the first and last time”.

Likewise, Bremen-based FC Oberneuland are renting a double-decker bus having opted to play their tie at Champions League side Borussia Moenchengladbach.

The fifth-tier team are arriving a day early so they can have a tour of Borussia Park, where only 300 fans will be allowed in for Saturday’s fixture. 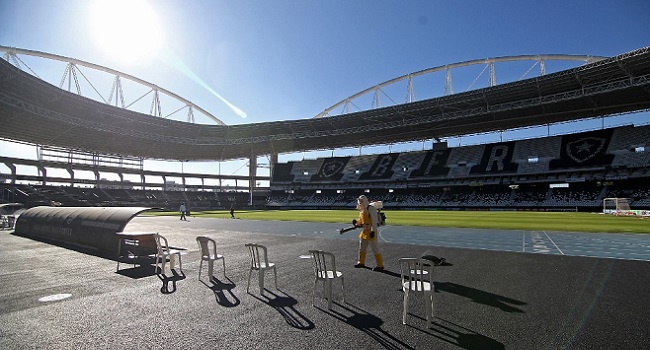 The state of Rio de Janeiro will allow football fans into stadiums from July 10, initially at one-third capacity, according to an official decree.

Capacity will move to two-thirds from August 1, while stadiums will be able to function with no restrictions from August 16, said the decree published by Rio townhall on Friday.

The initial easing must allow for 4 sqm per person and ticket sales will only be online.

The Rio state championship has been the first to resume in South America, a region hit hard by the coronavirus pandemic.

Brazil has the second-highest number of infections and deaths from the new coronavirus worldwide, after the United States: more than 1.2 million and 55,000, respectively.

And one of Brazil’s top football clubs, Fluminense, won its battle Friday not to play matches at a stadium also serving as a coronavirus hospital, which it argued was disrespectful to victims and their families.

Struggling to avoid the collapse of the health system as the pandemic surges in Brazil, authorities have set up a field hospital in the parking lot at Rio de Janeiro’s iconic Maracana stadium.

Paradoxically, the venue also began hosting matches again last week, after a three-month coronavirus hiatus on all professional football across the continent. 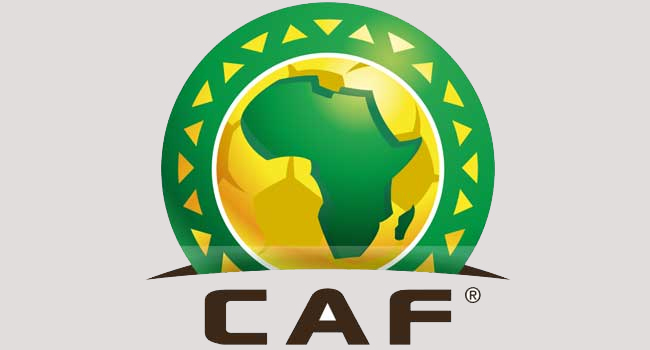 Zimbabwe’s stadiums have been declared unsuitable for high-profile matches by the Confederation of African Football (CAF), forcing sports authorities to seek an alternative venue for an upcoming Africa Cup of Nations qualifier against Algeria.

The country’s football association (ZIFA) said Tuesday they had received a letter from Cairo-based CAF stating none of the southern African nation’s grounds met the “standards to host international matches”.

The letter was sent following a visit by CAF inspectors last November.

“CAF has made a decision to bar ZIFA from using local stadiums in all upcoming international matches,” ZIFA spokesman Xolisani Gwesela said in a statement.

“We need to put our heads together as a country to ensure that our stadiums are renovated to meet the required standards.”

Zimbabwe was due to host the 2021 Africa Cup of Nations Group H qualifier against holders Algeria next month.

The sports editor of Zimbabwe’s state-owned Herald202 newspaper Robson Sharuko has blamed inaction by the authorities.

“It’s embarrassing and, sadly, it appears there are some people who simply don’t care,” Sharuko said in an opinion piece on Wednesday.

Zimbabwe’s economy has been crippled by decades of mismanagement by former president Robert Mugabe and his successor Emmerson Mnangagwa.

Hyperinflation has wiped out savings, cash is short and basic goods such as fuel are hard to come by.

Facilities that were once a source of pride are dilapidated and most roads are ridden with potholes.