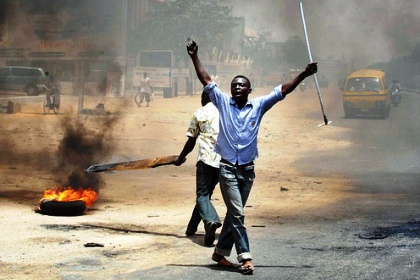 Three people have been killed on day 2 of the protest by some indigenes of Nasarawa State who are asking the state legislators not to impeach the Governor.

The ‘leave Al-makura alone’ protest on Thursday in Lafia turned violent when supporters of Information Minister, Mr Labaran Maku, an aspirant on the platform of the PDP, clashed with the pro-Al-makura protesters.

The account of the violence stemmed from alleged vandalization of Maku’s posters around Alamis market on UAC road by some of the pro-Al-makura protesters who locked down the state capital to press home their demand for lawmakers to rescind the impeachment plot against the Governor.

Military men were drafted in to contain the crisis. Two corpses were seen in Police van with their legs hanging down while the military arrested some persons.

The police spokesperson, Numan Umar, said that he was yet to confirm the casualty figure but referred our reporter to the B division of the Nigerian Police which was under heavy military presence and people were barred from gaining entry.