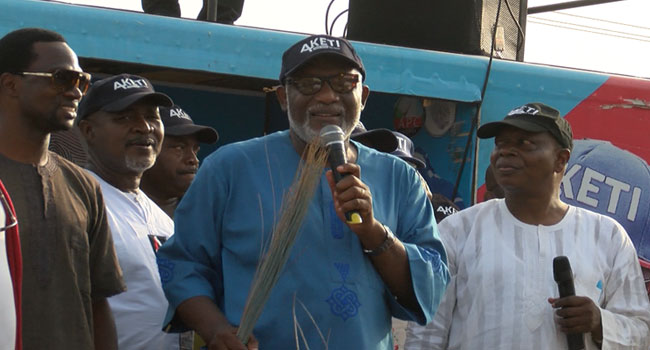 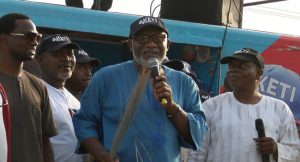 The governorship candidate of the All Progressives Congress (APC) in Ondo state, Mr Oluwarotimi Akeredolu, has urged Ondo residents not to allow external influence deter them from supporting APC in the state.

Akeredolu said that those sponsoring the Alliance for Democracy see the people of the state as fools.

The APC flagbearer who noted that since the sponsors of the AD still have the APC government in their states, they are only taking the people of Ondo state for a fool for asking them to vote AD into government.

The APC candidate said “despite the fact that we have pleaded and also sent prominent people to appeal to them, some politicians in the southwest wanted to use the sunshine state as an object of political experiment”.

“Asking Ondo state people to vote for the AD while the sponsor states are still controlled by the APC is an insult on the sensibility of the people of Ondo state,” he said.

Akeredolu further said “if the sponsors of the AD candidate, Olusola Oke, are serious, they should first decamp to the AD in their respective states rather than stay under the guise of APC and continue to sponsor AD.

Akeredolu charged the people not to be afraid and assured them that nobody can take away their rights.

He urged supporters and members of the party to embark on house-to-house campaign to enlighten the people on the need to stand against external influence.

The APC candidate said that the task to rescue the state and reposition it must be undertaken by all the good people of the state.

Earlier, Akeredolu took his campaign to the popular market along Oba Adesida raod, Akure where he was given a rousing reception by the market women.

He also visited Ilekun, Oda, Apomu, Isinka and Ipinsa where he addressed the traditional rulers on why they should support the APC.

The governorship candidate of the All Progressives Congress (APC) in Ondo state, Mr Rotimi Akeredolu, has said he is prepared to offer leadership with integrity that will move the state forward.

Akeredolu said the state is where it is because of lack of dedication by those at the helm of affairs of the state.

The APC governorship candidate spoke on Wednesday, November 16 at an economic summit organized by the Sunshine Progressives Coalition (SPC) held at the Adegbemile Cutulral center, Akure.

Akeredolu said if elected he would drive economic and industrial revolution into the state through foreign investors with federal government partnership.

The legal practitioner lamented the absence of industries in the state, and noted that the state was in dire need of investments.

He promised to run a government that would encourage investors to come to the state, as his government will not close its door to anybody who is willing to invest in the state.

Akeredolu also regretted that Ondo lost the opportunity to have Dangote Refinery sited in the state, and assured the cheering crowd that he would bring another refinery to the state.

He said the sunshine state, having the longest shore line and the deepest part of the sea in the country deserves a sea port.

The APC flagbearer said such developmental project is part of the reasons why the people of the state must vote APC into power so as to use the federal government advantage to accelerate the spate of the projects.

He said that the state is blessed with untapped natural resources which will attract lots of development.

He said “I can assure you, we will get refinery back to Ondo State. We will try to bring one that is bigger than the one Dangote wanted to bring here.

“But if we can’t get bigger one, at least we will get a refinery in Ondo state. We have the longest shore line in Nigeria, we have the deepest part of the sea, and yet, we don’t have a port.

“The only way we can get a port is through the Federal government’s support, even if we bring private companies to build ports, we will need the federal government to give license

“That is why we need to vote for a party that is in the center. We need investment in this state, don’t close your door to anybody, I will not close the door to those who are interested in investing in this state

“It is only in Ondo state today that we can grow rice but our government is lazy, up till today , we don’t have a programme about rice production and in North, some of the state have completed their programme. They have harvested, they have a lot to eat, sell to us and even import,” he stressed.

The governorship candidate of the All Progressives Congress (APC) in Ondo State, Mr Rotimi Akeredolu, has cautioned some politicians in the state to stop playing politics of strife and whipping up religious sentiments.

His statement is coming on the heels of an alleged insinuation by some politicians in the party that he is being sponsored by Fulani cabals.

Akeredolu alleged that those spreading such rumour against him were bent on causing disunity amongst the Yoruba clan.

He wondered if those who voted for him during the party’s primary election or the people of the state who would vote in the forthcoming governorship election are of the Fulani tribe.

The APC flagbearer spoke at Ilu Tuntun in Okitipupa Local Government Area of the state during his campaign tour to some local government areas.

“Those behind this rumour are all desperate politicians and it is this desperation that is the reason behind the baseless rumour. I am a true son of Yoruba race from Owo in Ondo state, who values service to his people above flimsy sentiments,” he stressed.

“‎How can people be going around to say I am being sponsored by the Fulani cabal? Are we not of the same political party again? Don’t let people deceive you. It is those who do not want the APC to progress that are trying to cause confusion between us.

“But we will not be deterred. We will strive on to achieve our desired result which is to clinch the seat of the governor at the Government House. APC is capable and together we can do it,” he highlighted.

Addressing the people of the town, Mr Akeredolu promised to revisit all the legacies of the former governor of the state, late Olusegun Agagu which he said were abandoned by the Olusegun Mimiko-led administration.

Akeredolu said that although the people of the Southern Senatorial District were still enjoying some of the infrastructures provided by the late governor, he would complete all the abandoned projects in the area.

He described the Southern Senatorial District as home for him and promised to work on some of the moribund industries in the area.

The legal practitioner said that he would ensure that the abandoned Ondo State University of Science and Technology was brought back to life.

According to him, promoting functional education is one of the key agenda of his campaign promises.

Akeredolu boasted that the APC would win Okitipupa in the forthcoming election, saying he was sure of victory.

He said that he was confident that APC would win Okitipupa Local Government Area, even if PDP is able to resolve its internal crisis.

“What we have here in Okitipupa applies generally all over the state, the only advantage Okitipupa has is that the governor before Mimiko, late Governor Olusegun Agagu did a lot of work and their roads here

“So you can see that we are moving faster here because they have better roads but outside that, this is a place where, for instance they have not had light for years, the same applied to the Northern Senatorial District, Akoko where we went. So there is a problem.

“This is a place where teachers have retired, and they have not employed new teachers in the last four years. It applies all over the state

“You heard one Kabiyesi said they used to contribute money to pay teachers, so in terms of education, as it applies to other parts of the state, we are determined to make sure that we have a functional education. We want to promote functional education and it is important, generally over the state

“But most importantly to them here is that, the University of Okitipupa is being abandoned, which is unfortunate and I have said so repeatedly, that we must do something about that,” he said, reeling out his manifesto.