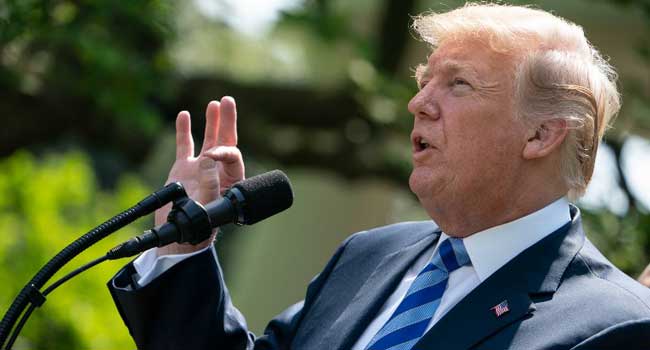 US President Donald Trump informed Kim Jong Un Thursday he is canceling their nuclear summit next month in Singapore, blaming “anger” and “hostility” from the North Korean regime for the collapse of the historic event.

Trump and Kim had been due to hold high-stakes talks on June 12 aimed at ridding the reclusive state of nuclear weapons, but the meeting was recently thrown into doubt as both sides raised the prospect of scrapping the discussions and traded threats.

“Sadly, based on the tremendous anger and open hostility displayed in your most recent statement, I feel it is inappropriate, at this time, to have this long-planned meeting,” Trump wrote in a letter to Kim released by the White House.

“Therefore, please let this letter serve to represent that the Singapore summit, for the good of both parties, but to the detriment of the world, will not take place.”

Trump also brandished the threat of America’s nuclear might in his letter, writing: “You talk about your nuclear capabilities, but ours are so massive and powerful that I pray to God they will never have to be used.”

The US leader’s letter appeared to leave the door open to a future meeting with Kim, however, stressing that he had been “very much looking forward to being there.”

“We greatly appreciate your time, patience, and effort with respect to our recent negotiations and discussions” relative to the summit, he told Kim.

“I felt a wonderful dialogue was building up between you and me, and ultimately, it is only that dialogue that matters,” Trump said. “If you change your mind having to do with this most important summit, please do not hesitate to call me or write.

“The world, and North Korea in particular, has lost a great opportunity for lasting peace and great prosperity and wealth. This missed opportunity is a truly sad moment in history.”

The decision came as North Korea said it had “completely” dismantled its nuclear test site, in a carefully choreographed move portrayed by the isolated regime as a goodwill gesture ahead of the Singapore summit.

President Moon Jae-in is enjoying record support from the South Korean public in the wake of a historic summit with his North Korean counterpart, pollsters said Thursday.

More than three in four voters approved of Moon, according to pollster Realmeter — an all-time high for any South Korean president at the end of their first year in office.

Realmeter said the result reflected “mounting public expectations for the North’s denuclearisation and the establishment of peace on the Korean peninsula” following Moon’s meeting with North Korean leader Kim Jong Un on Friday.

The president’s support rose more than eight points to 78.3 percent in the week following the summit, where the two leaders agreed to work towards a permanent peace treaty.

Since his May 2017 election, Moon had projected a stable and down-to-earth style while communicating closely with voters, Jeong Han-wool of public opinion firm Hankook Research told AFP.

“Moon’s approval ratings, which were relatively low around the end of last year, surged back up following the Pyeongchang Winter Olympics,” he said.

North Korea sent athletes, supporters, an art troupe and high-level officials to the Olympics, initiating a flurry of diplomatic gestures that culminated in last week’s summit.

Jeong said Moon’s popularity was likely to continue through next month’s local elections, which Moon’s ruling Democratic Party is widely tipped to dominate.

The centre-left party enjoyed the support of nearly 55 percent of the electorate in the latest Realmeter poll, while the conservative Liberty Korea Party had less than 18 percent support, shedding more than three percent since last week.

Support for the opposition has flatlined since former presidents Park Geun-hye and her predecessor Lee Myung-bak were embroiled in massive corruption cases. Both former leaders are now in jail.

The May 9 trip will be the first visit by a South Korean leader to Japan in more than six years and comes amid a flurry of diplomacy in the region and beyond around North Korea and its nuclear weapons. 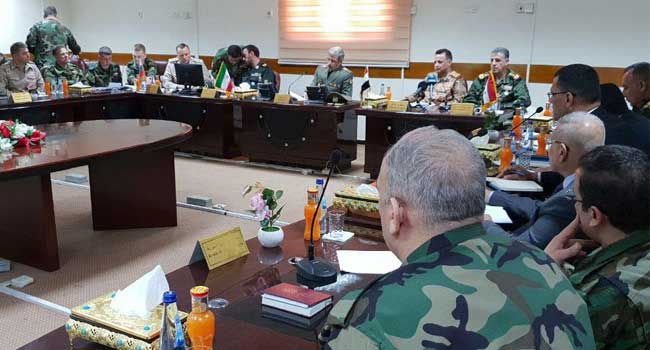 Iran, Iraq, Syria and Russia held a meeting in Baghdad on Thursday of military and security officials to coordinate “anti-terrorism” efforts, the Iranian defence ministry said.

“Cooperation in intelligence between the four countries for common aims and anti-terrorism missions has been successful in restoring stability and security, and it should form the basis for future cooperation,” Defence Minister General Amir Hatami said in a statement from the Iraqi capital.

The “coalition” had played an “important role in the defeat” of the Islamic State group in both Iraq and Syria, he said.

The meeting came the same day as Iraq said its air force carried out a raid on IS positions in Syria.

Tehran supports the Iraqi government and the Russian-backed regime in Syria in fighting rebel groups and jihadists by sending “military advisers” and “volunteers” from Iran and Afghanistan. United States’ President Donald Trump proposed a White House summit when he called Russian President Vladimir Putin last month, prior to the mass expulsion of Russian diplomats from the US, a top Kremlin aide said Monday.

On March 20, Trump called Putin to congratulate him on his re-election, and the US leader told reporters afterward that the two would “probably get together in the not-too-distant future.”

In calling Putin, Trump ignored explicit advice from his national security advisers not to do so, The Washington Post has reported, quoting officials familiar with the call.

Ushakov said on Monday, however, that the two sides have not had any “concrete discussions” about the summit since that rare Trump-Putin phone conversation.

“It was Trump himself who proposed holding the meeting,” Ushakov said.

“But after that, a new breakdown in our bilateral ties has taken place, the diplomats have been expelled.”

He expressed the hope that Russia and the United States could return to “constructive and serious dialogue.”

After the call, Washington expelled 60 Russian diplomats and shut down a Russian consulate in Seattle, joining Britain’s allies in responding to the poisoning of former double agent Sergei Skripal and his daughter Yulia in the English city of Salisbury on March 4.

Washington has, however, said Russia is free to apply to accredit more diplomats to replace those expelled. President Muhammadu Buhari will Wednesday depart for Istanbul, Turkey to participate in the ninth Summit of the Developing 8 (D-8) on Friday, October 20, 2017.

Prior to the D-8 Summit, President Buhari, at the invitation of President Recep Tayyip Erdogan of Turkey, would participate in an official working visit to Ankara, the capital city.

This was contained in a statement signed on Tuesday by the Special Adviser to the President on Media and Publicity, Mr Femi Adesina.

The statement read: “In Ankara, the President will have a tete-a-tete with his Turkish counterpart while delegations from both countries will hold discussions in various fields including defence cooperation, security, educational and migration issues. The Nigerian leader will also visit the Grand National Assembly of the Republic of Turkey in Ankara where he will meet with the Speaker, Ismail Kahraman.

“While in Istanbul, the Turkish commercial centre, President Buhari will use the occasion of the D-8 Summit to bolster warm and growing ties across a broad range of areas of cooperation with leaders of the D8-member countries, namely Bangladesh, Egypt, Indonesia, Iran, Malaysia, Pakistan and Turkey.”

The D-8 Summit with the theme, “Expanding Opportunities through Cooperation”, will among other things, focus on cooperation in the areas of agriculture, trade, transport, energy and increased private sector participation among member-countries.

During the summit which will also mark the 20th anniversary of the organisation established to improve the developing countries’ positions in the world economy, President Buhari would highlight the significant show of confidence in Nigeria’s business environment and economy.

According to his spokesman, he would also affirm the nation’s resolve to work with D-8 member-countries on many key areas such as economy, trade, as well as peace and security.

At the end of the summit, the Heads of State and Government would adopt a communiqué, also known as the ‘Istanbul Declaration’.

President Buhari would be accompanied on the trip by some ministers and top government officials, including the Comptroller-General of the Nigerian Customs Service, Hameed Ali.

The objectives of the organisation are to improve member states’ position in the global economy, as well as diversify and create new opportunities in trade relations among others. The Delta state South-South summit came to an end last week but it did,it made the centerstage of the nation as all that was important including major stakeholders in the country were present at the summit which took place at Asaba the Delta state capital.

Femi Larry Lin who is the Chairman of the Industrial Group of the Lagos Chamber of Commerce and Industry and the President of the Nigeria/Malaysia Business consult was with Esther Ugbodaga to discuss the way forward concerning the implementation the trade policies arrived at in the South-South summit and all other summit held.