Manny Pacquiao has returned to his home town (Manila) on Wednesday, following the defeat by Floyd Mayweather in their world Welterweight super-fight on May 2.

Pacquiao said, “I will focus on healing my shoulder. After that, I will announce continuing my career or retirement,”.

Despite an unanimous points defeat in Las Vegas, Pacquiao, a six-weight world champion, was welcomed back to the Philippines by fans as he paraded through the streets of Manila on the back of a truck.

Pacquiao, who is also a Congressman in his home country, had his arm supported by a sling, following surgery on his injured shoulder – a problem he said had hampered him during the fight with Mayweather.

The new figures released by American networks Showtime and HBO said the fight shattered the previous record for total pay-per-view buys with 4.4million purchases of the fight in the United States alone.

Following the fight, the undefeated American (Mayweather) called Pacquiao a “sore loser” and has ruled out a rematch, but Pacquiao, who is facing a Nevada law suit after being accused of failing to announce his injury prior to the bout, said he would consider fighting again.

“I (would) like that. I want that. But my focus right now is my shoulder, my work as a congressman and my family,” he said.

Pacquiao also said he had accepted his defeat by Mayweather, adding that after reviewing the fight on video, he still believed he won by a slim margin.

“I reviewed the fight and kept score. I won by two points, but a decision has been made and we have to accept it,”. 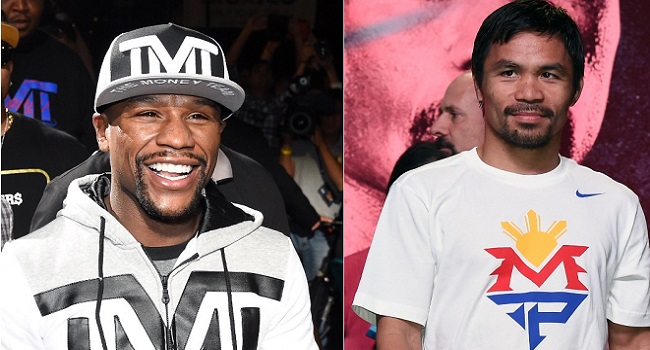 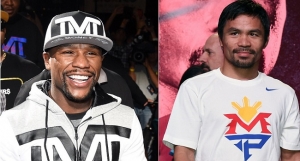 Floyd Mayweather taunted Manny Pacquiao ahead of their eagerly-anticipated super-fight on Saturday, telling him he should be earning more money.

However, the purse split is 60-40 in Mayweather’s favour and the American legend said his rival had not been looked after properly.

“Financially, he hasn’t been treated right for this fight. And [this fight] is all about the money.

“Saturday is just work, I’ll just do what I do. But I’ll make upwards of $200 million for this fight, which is $50 million apiece for my kids. So it was a smart move.”

The 38-year-old American said he instigated the initial meeting in Pacquiao’s Miami hotel suite – which Mayweather said was not up to his exacting standards.

Mayweather also reiterated his intention to retire after another fight in September, even though two more victories would leave him equal with heavyweight legend Rocky Marciano’s 49-fight unbeaten record.

Meanwhile, Manny Pacquiao has said that he is 100 per cent confident of beating Mayweather.

“Don’t get nervous, I’m the one fighting, so relax.”

“I am very excited and my confidence is 100 per cent.

“Any time I am the underdog, I like that. It means my killer instinct and focus is fully there. This is the moment I believe he will experience his first loss.” 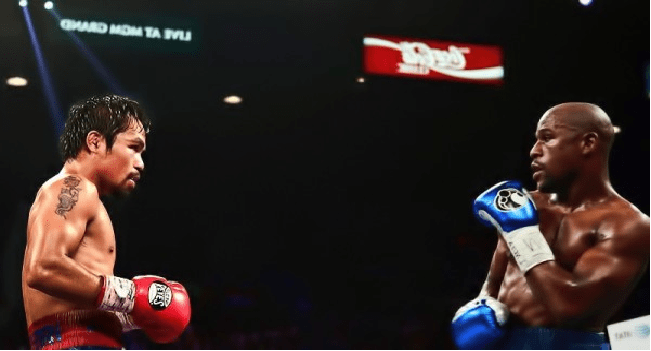 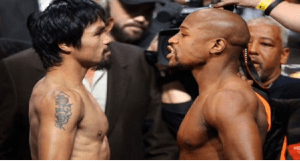 Floyd Mayweather’s long-awaited fight with Manny Pacquiao has finally been confirmed after months of negotiations.The two biggest names in boxing have been locked in prolonged talks, raising further doubts that the super-fight could fall through at any time.

Both men have finalized terms for the clash at the MGM Grand in Las Vegas on May 2nd.

Additional stumbling blocks have been overcomed in recent weeks, with both camps reaching an agreement on drug testing and both men able to wear their own gloves – no rematch clause has been included.

The 37-year-old American, Mayweather nicknamed ‘money’ is unbeaten in 47 fights with 26 knockouts, but Pacquiao is considered the biggest threat to his status as the best pound-for-pound fighter on the planet.

The showdown in Vegas is projected to be the most lucrative in boxing history. Mayweather is expected to have a 60-40 split advantage on revenues, earning a minimum of $120 million and Pacquiao at least $80 million.