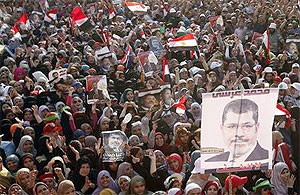 Clashes broke out in central Cairo on Tuesday when supporters of ousted President Mohamed Mursi came under attack as they marched to the Interior Ministry, a Reuters reporter said.

Supporters of the new military-installed government hurled stones at the marchers and threw bottles at them from balconies. Police then fired tear gas at the pro-Mursi protesters.

A few thousand pro-Mursi protesters were taking part in the march when the trouble erupted. Local residents taunted them, calling them terrorists and saying they were not welcome. They then began throwing stones at them.

The protesters are calling for the reinstatement of Mursi, who was overthrown by the military on July 3 and is now being held at undisclosed location.