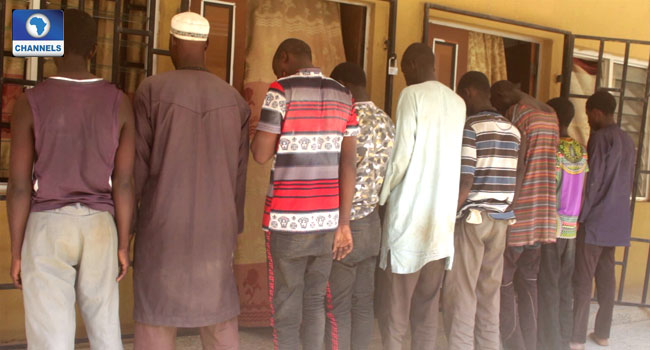 NSCDC nabbed members of the gang said to be operating between the borders of Nigeria and the neighbouring Cameroon Republic in Adamawa State.

Corp Commander, Nurudeen Abdullahi disclosed this at a press briefing in his office in Yola, the Adamawa state capital.

“We have gone to Yobe South, Mayha, Michika and Fufure to block all these routes where the diversion is taking place. The Command has already constituted a formidable patrol team in order to track down their activities and bring the perpetrators to book.

“About the vehicle carrying hard drugs, we got the person supplying hard drugs, more especially tramadol to Adamawa State. On seeing the NSCDC patrol team blocking his way, he took to his heels”, he stated. While reiterating the commitment of his command to fight criminal elements in the state, Adbullahi warned criminals to desist from their activities.

He noted that cattle rustlers, drug peddlers, armed robbers wouldn’t be spared as the Federal Government is committed to the protection of lives and properties of Nigerians.

“The people that are involved in this cattle rustling, armed robbery, drug abuse, drug dealing should stop as the government is very serious about this issue.

“Anybody that is caught is going to face the law. All the security agencies, not only Civil Defence are now armed, they are ready and are going to stop this”, he said.

The Corp Commander also appealed to the public to cooperate with security agencies by availing them with timely and useful information that will help in arresting criminals.