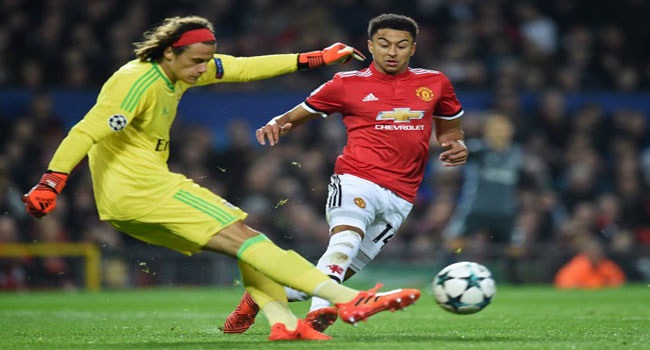 Manchester United are on the brink of the Champions League knockout phase after more inadvertent generosity from Benfica goalkeeper Mile Svilar helped them to a 2-0 victory on Tuesday.

Having carried a Marcus Rashford free-kick into his own net to gift United victory in the reverse fixture, 18-year-old Svilar scored an unwitting own goal when Nemanja Matic’s shot hit the post and went in off his back.

Daley Blind’s 78th-minute penalty completed victory, but with CSKA Moscow beating Basel in the other Group A game, United were left needing one point from their final two games to be certain of a last 16 berth.

Rui Vitoria’s Benfica remain bottom of the group with no points after their fifth successive European defeat — the worst run in the club’s history — and can no longer qualify for the knockout rounds.

Belgian youth international Svilar for one will be glad to see the back of United, particularly after he appeared to have atoned for his blunder in Lisbon two weeks ago by saving an early penalty from Anthony Martial.

With four wins from four games, United are six points clear at the top of the group and only a minor miracle will prevent them from reaching the knockout rounds for the first time since the 2013-14 season.

Jose Mourinho’s side visit Basel on November 22 before closing their campaign at home to CSKA next month.

Rewarded with a starting berth for his match-winning cameo in United’s 1-0 victory over Tottenham Hotspur on Saturday, Martial won but then squandered a 15th-minute penalty.

In attempting to curb the Frenchman’s driving run into the box from the United left, Douglas lost his footing and handled the ball.

Martial took the penalty himself, steering it towards the bottom-left corner, but Svilar got down to turn the ball around the post.

Benfica had been denied a penalty shortly before United’s spot-kick was awarded when Eric Bailly stepped across Pizzi and the hosts also had an appeal turned down following a challenge on Juan Mata by Ljubomir Fejsa.

It took a spectacular one-handed save from David de Gea to prevent Diogo Goncalves putting Benfica ahead with a swerving 25-yard effort.

Svilar denied United again on the half-hour, pushing Romelu Lukaku’s low strike behind, but fortune would desert the teenager once again on the brink of half-time.

From Lukaku’s lay-off, Matic let fly from 30 yards with a powerful drive that struck the base of the right-hand post and ricocheted against the prone Svilar’s left arm before bouncing into the net.

Svilar, who rushed out to thwart Lukaku moments later, wore an understandably rueful expression as he left the pitch at the break.

Jesse Lingard gave way for United at half-time after being unable to run off a blow to the side, with Henrikh Mkhitaryan taking his place behind Lukaku.

The Armenian was unable to add much zip to the home side’s play, however, and Benfica threatened to equalise on several occasions.

De Gea’s fingertips stopped Goncalves from levelling with an angled effort and the Spain international was grateful to his post for baling him out in the 65th minute after Bailly’s sloppy pass gave Raul Jimenez a clear sight of goal.

Blind soothed Old Trafford’s nerves with 12 minutes remaining by drilling a penalty down the middle of the goal after Andreas Samaris was penalised for felling United substitute Rashford.