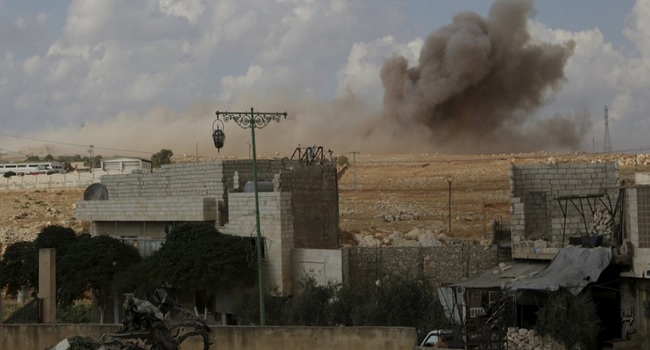 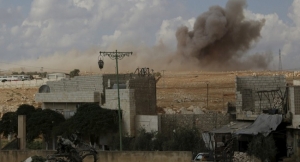 Syrian troops and militia backed by Russian warplanes mounted what appeared to be their first major coordinated assault on Syrian insurgents on Wednesday and Moscow said its warships fired a barrage of missiles at them from the Caspian Sea, a sign of its new military reach.

The combined operation hit towns close to the main north-south highway that runs through major cities in the mainly government-held west of Syria, said the Syrian Observatory for Human Rights, a British-based group which tracks the conflict via a network of sources within the country.

The Iranian-backed Hezbollah militia took part in the fight, according to a regional source who is familiar with the military situation in Syria.

Abdulrahman said later there was no sign that Syrian troops and their allies had made any tangible advances on the ground.

They briefly entered one town, but were forced to pull back, he said, and around 15 of their tanks or armored vehicles had been either destroyed or disabled.

Islamic State militants have seized much from Syria since civil war grew out of anti-government protests in 2011, but the areas targeted in Wednesday’s combined assault are held by other rebels, some U.S.-backed, fueling accusations by Russia’s critics that its real aim is to help the government.

Moscow says it shares the West’s aim of preventing the spread of Islamic State, and Russian Defence Minister Sergei Shoigu told President Vladimir Putin during a televised meeting that four Russian warships in the Caspian Sea had launched 26 missiles at Islamic State in Syria earlier in the day.

The missiles would have passed over Iran and Iraq to reach their targets, covering what Shoigu described as a distance of almost 1,500 km (900 miles), the latest display of Russian military power at a time when relations with the West are at a post-Cold War low over Ukraine.

The terrain-hugging Kalibr cruise missiles, known by NATO by the codename Sizzler, fly at an altitude of 50 meters and are accurate to within three meters, the Russian defense ministry said.

The air campaign in Syria has caught Washington and its allies on the back foot and alarmed Syria’s northern neighbor Turkey, which says its air space has been repeatedly violated by Russian jets.

Ankara summoned Russia’s ambassador for the third time in four days over the reported violations, which NATO has said appeared to be deliberate and were “extremely dangerous”.