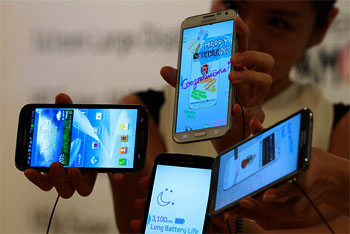 Samsung increased its lead in terms of smartphone shipments as estimate shows that the total number of smartphone shipments exceeded 157 million in Q3 2012. The Korean company shipped a record 56.3 million which was almost double the number of iPhones shipped by Apple (26.9 million). The Galaxy S III played a key role for Samsung with estimated sales of 18 million in the third quarter. Things are getting so dire for RIM and Nokia that ZTE has got ahead of them. LG did well amongst the Tier 2 players compared to rivals like Huawei, Motorola and HTC.

Nokia’s insistence on failing to ship an Android based handset and stick to its Windows Phone (W7 Mango) devices meant sales fell a whacking 63 per cent compared to Q3 2011.

The Finnish company shipped just 6.3 million smart devices in the third quarter. Though there’s hope for Nokia as the Xmas season always see strong sales growth for everyone.

In its report, ‘Smartphone Evolution Strategies: Premium, Standard & Economy Markets 2011-2016′, Juniper says, “Samsung has been highly effective in leveraging its global brand strength and the popularity of the Android OS to drive sales of smartphones in all price tiers.”

With Windows Phone 8 devices due to become commercially available shortly plus the fact that in the UK, for example, its offers handsets to run on EE’s 4G LTE network.

No such luck for RIM which unbelievably won’t actually ship a BlackBerry 10 smartphone until Q1 2013 – just when everybody has bought a new phone.

Given RIM’s emphasis on the business sector missing Xmas may not harm its Q4 sales as much as expected.

Even LG sold more smartphones than Nokia as it posted a 24 per cent quarter-on-quarter (q-o-q) growth to a record 7 million smartphone shipments.

The phenomenal success for Samsung has been the Galaxy S III which is, of course, an Android based device.