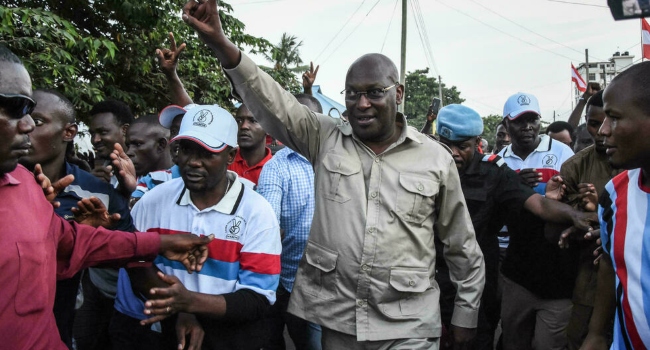 Tanzanian opposition leader Freedom Mbowe appeared in court on Friday on terrorism charges that his supporters have denounced as a politically motivated move to silence dissent.

It was the first time Mbowe was seen in public since his arrest along with other members of his Chadema party on July 21, just hours before they were to hold a public forum on constitutional reform.

Mbowe, 59, flashed the V-for-victory sign as he arrived at the court in Tanzania’s economic capital Dar es Salaam, transported in a green van from the prison.

Security was tight to prevent a repeat of a demonstration by his supporters outside the court on Thursday that was broken up by riot police.

But Chadema said 11 members of the party were arrested when they turned up to the court on Friday.

Mbowe has been charged with terrorism financing and conspiracy in a case that has triggered concern among rights groups and Western nations about the state of democracy under Tanzania’s new President Samia Suluhu Hassan.

The case against him was adjourned until August 13.

Mbowe had initially been due to appear in court via video link from prison on Thursday but the case was postponed to Friday because of connection problems, his defence lawyer Peter Kibatala said.

Kibatala said Thursday the charges against Mbowe “have no basis in law”, describing them as “opportunistic and probably politically motivated.”

There had been hopes Hassan would usher in change from the autocratic rule of Magufuli, nicknamed the “Bulldozer” for his uncompromising style.

But Chadema leaders say the arrest of Mbowe and his colleagues reflect a deepening slide into “dictatorship” under Hassan.