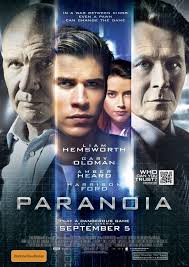 “Paranoia,” a new movie about a war between tech oligarchs and the corporate espionage they undertake to destroy each other, makes its debut in Los Angeles with stars Harrison Ford, Liam Hemsworth, Amber Heard, and Richard Dreyfuss.The movie was directed by Robert Luketic


Singer Miley Cyrus, engaged to Liam Hemsworth and Calista Flockhart married to Ford, also attended the screening at the theater at the Directors Guild of America Headquarters in West Hollywood.

“Paranoia” is capitalizing on the currency of the Snowden  issue, a movie that delves into issues that are all too current today, with government wiretapping and the Edward Snowden saga taking center stage, with Harrison Ford adding to the conversation lamenting that privacy doesn’t really exist anymore, in essence.

The movie depicts a young and ambitious wiz-kid who becomes a pawn in a fierce rivalry between tech billionaires. As the young superstar is seduced by unlimited wealth and power, he is hired by one to spy on the other’s company from the inside, he realizes his life is in danger too late, and that he is in far too deep and knows far too much for them to let him walk away.

Hemsworth, an Australian actor best known for his role as Gale Hawthorne in the “Hunger Games” films, said acting between heavyweights Ford and Oldman was a tall order.

The talk on the red carpet wasn’t all about “Paranoia,” with news breaking this week of Harrison Ford replacing Bruce Willis in the upcoming third installment of the “Expendables” film.

When asked why he was participating in the series, “the first two have earned a combined $575 million dollars  world-wide Ford” said.