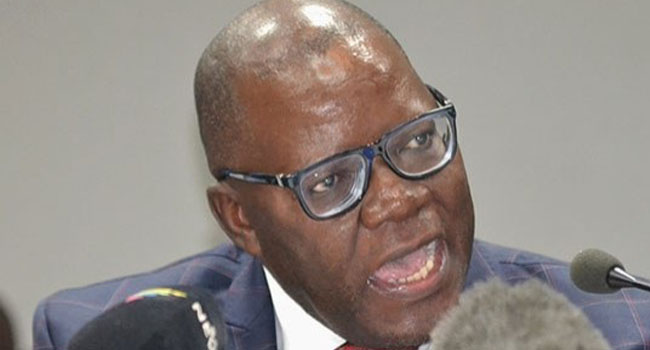 Tendai Biti, 53, was freed on $10,000 bail after a night behind bars, after having been charged with assault. Provincial head magistrate in Harare, Vongai Muchuchuti, set his case to January 18 for trial.

The charge against Biti, a lawmaker who is vice-president of Zimbabwe’s main opposition party, the Movement for Democratic Change (MDC) Alliance, arise out of an alleged incident following November 30 a court hearing.

Biti, who is a qualified lawyer, was involved in litigation, representing a client in the Harare Airport Road scandal, Tatiana Aleshina, a Russian national was said to be constantly whispering information to the prosecution.

Biti voiced a complaint to the magistrate about Aleshina’s conduct.

“After the court hearing, Aleshina confronted honourable Biti threatening that he should not mention his name,” MDC spokeswoman Fadzai Mahere told AFP, adding that she then filed a police report.

He was arrested and detained when he went to the police to clear his name, Mahere added.

In court, prosecutor Idah Maromo argued that Biti had assaulted Tatiana Aleshina by threatening her, pointing his finger at her face, shouting insults at the top of his voice, “intending to inspire fear of belief into her mind”.

Biti denies the charge and his party described it as “trumped-up” and a “weaponisation of the law” to target party members and officials.

His lawyer Alec Muchadehama also argued that Zimbabwean police “not working on their own.

“There is an external force telling them what to do and who to arrest,” he said.

Biti has previously been charged with treason, among other criminal offences.

Zimbabwean police have in the past arrested several opposition officials, which the party argues is a way of weakening their struggle against the ruling ZANU PF.

A Zimbabwe court Monday convicted leading opposition figure Tendai Biti of an election crime and fined him for announcing his own results for presidential polls last July, which he claimed he won.

Biti, a respected former finance minister, proclaimed his Movement for Democratic Change (MDC) the victor of the contested July 30 poll which sparked anti-government protests that were put down by soldiers.

Six people were killed in the violence.

Magistrate Gloria Takundwa ordered Biti to pay $200 — the price of a full tank of petrol — or go to prison for a week. He was also handed a jail term of six months, which was suspended for five years.

MDC leader Nelson Chamisa, who was in court, said the conviction “casts a very dark shadow on our politics”.

Zimbabwe was thrown into chaos following the elections, the first in the country’s history not to feature former president Robert Mugabe following his resignation in the wake of a brief military takeover in November 2017.

President Emmerson Mnangagwa had promised not to repeat the rigging and intimidation that characterised previous votes, but delays in announcing results enraged the opposition and led to street demonstrations.

Mnangagwa, Mugabe’s successor at the head of ruling party ZANU-PF, was later declared the winner according to the official results, but the MDC claims the election was rigged.

Biti fled the country for neighbouring Zambia at the height of the poll tensions but was returned to Zimbabwe despite seeking asylum, sparking an international incident.

The international community has urged Mnangagwa to guarantee the safety of Biti, who was the internationally-respected finance minister in Zimbabwe’s 2009-2013 power-sharing government. 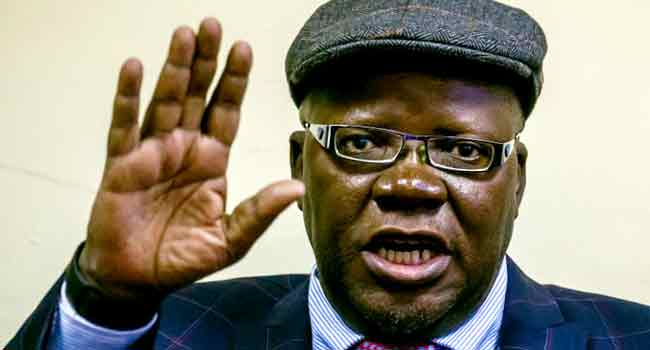 Zambian authorities on Thursday defied a court order stopping them from deporting top Zimbabwe opposition figure Tendai Biti, handing him to police across the border, his lawyer said.

“They have defied the court order to allow him to seek asylum and as I am speaking to you right now he has been handed over to the Zimbabwean police,” lawyer Gilbert Phiri told AFP.

But authorities have ignored the ruling and deported him, Phiri said.

He is on the Zimbabwe side,” he confirmed. “This is really embarrassing.”

A hearing at Zambia’s High Court, where Biti was supposed to appear, will go ahead Thursday in his absence, Phiri added.

Mugabe’s successor President Emmerson Mnangagwa was declared the winner on Friday by a narrow margin — results the opposition has furiously contested, alleging fraud.

Biti, an internationally-respected finance minister in Zimbabwe’s troubled 2009-2013 power-sharing government, had proclaimed a victory for the opposition before the results came in.

According to Zimbabwe’s state-run Chronicle newspaper, he is among nine suspects sought for inciting protests over alleged rigging which turned deadly.

The army opened fire with live ammunition on the opposition protesters, killing six people and prompting an international outcry.

The election has been marred by accusations of a crackdown on opponents, with arrests and beatings, as well as the deadly violence and rigging claims. 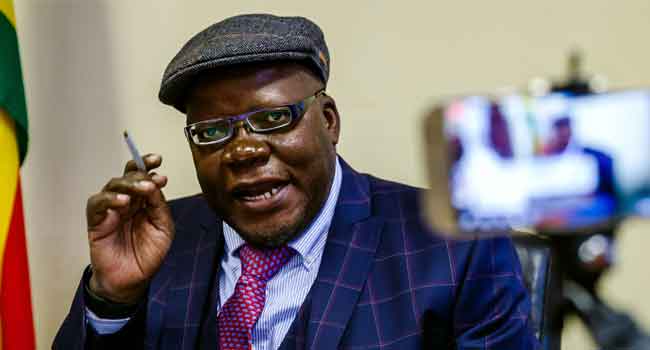 Senior Zimbabwean opposition figure Tendai Biti was arrested as he tried to flee to neighbouring Zambia to seek asylum on Wednesday, his lawyer said, allegedly on charges of inciting violence over the disputed election result.

Supporters of the MDC took to the streets on August 1 to protest against the alleged fraud, triggering a brutal response from the military which opened fire on the demonstrators, leaving six people dead.

The day before the protests — and before the final presidential results were announced — Biti held a press conference at the Movement for Democratic Change (MDC) headquarters in Harare, claiming victory for the party.

Biti is a senior figure in the MDC alliance and was the respected finance minister in Zimbabwe’s troubled 2009-13 power-sharing government.

“He was arrested at the Zambian border,” Biti’s lawyer Nqobizitha Mlilo told AFP, adding by text message that he was trying to seek asylum.

The state-run Chronicle newspaper said Tuesday that Biti was among nine suspects sought for inciting the protests at which the army opening fire.

Police detective Portia Chinho told the paper they were wanted for “participating in a gathering with intent to promote public violence”.

The European Union and the United States have condemned violent attacks targeting the opposition since the elections, with the government accused of overseeing a brutal crackdown.

Human Rights Watch reported several cases of beatings and harassment in Harare’s suburbs as soldiers in groups of four to 10 attacked opposition supporters in bars and restaurants.

The MDC has accused security forces of abducting and beating scores of activists and their families since the election result was declared early Friday.

The  poll, the first since Mugabe was ousted last year after nearly four decades in power, was meant to relaunch Zimbabwe on the international stage and attract foreign aid and investment.

Mnangagwa says any fraud allegations should be raised through the courts and has vowed to protect rights as he promises a “new Zimbabwe” after the repression of the Mugabe era.

UN Secretary-General Antonio Guterres told Mnangagwa during a telephone conversation that he must rein in his security forces, a UN spokesman said.

Guterres also spoke by phone with Chamisa to urge him to turn to the courts — and not the streets — if he challenges Mnangagwa’s victory.

The MDC is expected to soon launch a legal challenge over the election result, in which Mnangagwa won 50.8 percent of vote, just scraping in above the 50 percent run-off threshold. 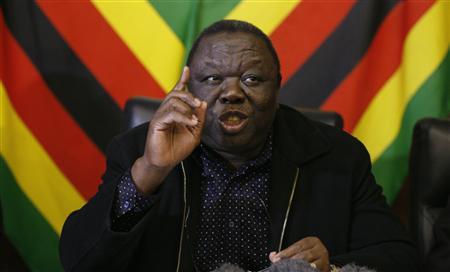 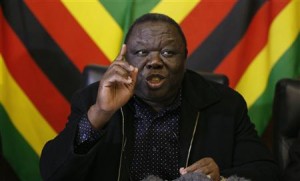 The suspension will further deepen the divisions in the opposition ranks.

The group led by the secretary-general of the Movement for Democratic Change (MDC), Tendai Biti, accused Tsvangirai and his lieutenants of resisting a leadership change after losing a third general election to Mugabe last July and of using violence against internal challengers.

The turmoil among his political rivals is a gift to the 90-year-old Mugabe, Africa’s oldest leader, who has ruled Zimbabwe since independence in 1980 despite frequent Western criticism over human rights and accusations of economic mismanagement.

In a statement after a day-long meeting, Biti’s faction said Tsvangirai and his deputy Thokozani Khupe had been suspended for deviating from democracy and failing to effectively tackle Mugabe.

“The MDC as we know it has abandoned its original founding values and principles,” it said. “The party has been hijacked by a dangerous fascist clique bent on destroying the same and totally working against the working people of Zimbabwe.”

Tsvangirai’s faction immediately dismissed the move as unconstitutional and meaningless.

Tsvangirai has resisted pressure to quit after a devastating election defeat last year which he says was rigged by Mugabe’s supporters, and analysts predict the party will break apart.

The 62-year-old Tsvangirai has led the MDC since its formation in 1999, when the former trade unionist emerged as the biggest threat to Mugabe.

But he has failed to dislodge his rival in three presidential polls, which his MDC and many Western observers say were neither free nor fair.