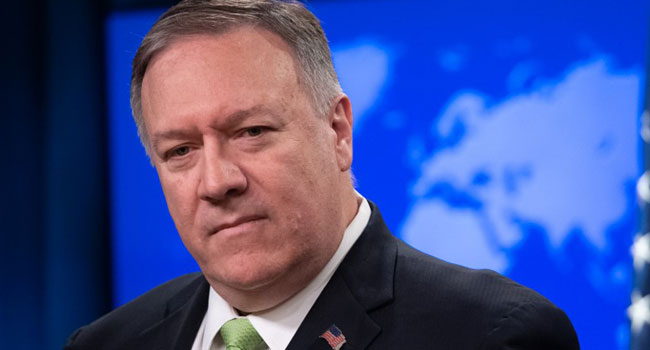 The United States welcomed on Monday Greece’s willingness to look for a solution to a territorial dispute with Turkey, after Secretary of State Mike Pompeo held talks with Greek officials.

Rival claims to potentially resource-rich territory under the Mediterranean should be resolved “peacefully in accordance with international law”, said Pompeo and Greek counterpart Nikos Dendias in a joint statement after holding talks in Thessaloniki.

The two NATO members have spent weeks at loggerheads after Ankara sent exploration vessels into disputed waters, roping in other European powers and raising concern about a wider escalation.

Turkey has also angered Greece by repeatedly casting doubt on postwar treaties setting out the status quo in the Aegean and eastern Mediterranean.

But last week Athens and Ankara said they were ready to start talks.

Pompeo, on a two-day visit to Greece, said in the joint statement that the US “welcomed Greece’s confirmed readiness to engage with other countries in the region to achieve maritime delimitation agreements”.

“The strength of our bilateral relationship is at an all-time high,” Pompeo tweeted earlier on Monday.

He will fly to the Greek island of Crete on Tuesday and tour the NATO naval base of Souda Bay.

Mitsotakis — who is hosting Pompeo at his family home on Crete — wants closer military ties with the US.

The secretary of state last October signed a defence agreement allowing US forces a broader use of Greek military facilities.

On Monday, both sides said they intended to “further enhance their strategic defence and security partnership” in talks in Washington next year.

A key element of the October deal was the northern Greek port of Alexandroupolis, a Balkans and Black Sea gateway of strategic value to the US navy and NATO.

The US has been granted priority status to the port after paying roughly $2.3 million (2 million euros) to remove a sunken dredging barge that had blocked part of the harbour since 2010.

At the time, Greek officials said the Pentagon was expected to invest over $14 million on the Greek airbase of Larissa and around six million euros at Marathi, part of the Souda base.

The visit to Thessaloniki is also intended as a sign to the Balkans on American willingness to invest in the region, the State Department said.

Pompeo’s tour later in the week also includes stops in Italy, the Vatican and Croatia.

In Rome, the secretary of state will discuss efforts by the Trump administration to deter its European allies from using equipment by Chinese manufacturer Huawei in developing their 5G networks.

The US accuses Huawei of being a tool for Chinese espionage.

Pompeo is also scheduled to attend a meeting at the Vatican on religious freedom, his human rights priority. There, too, he will warn of China’s actions against minorities, including Muslims.