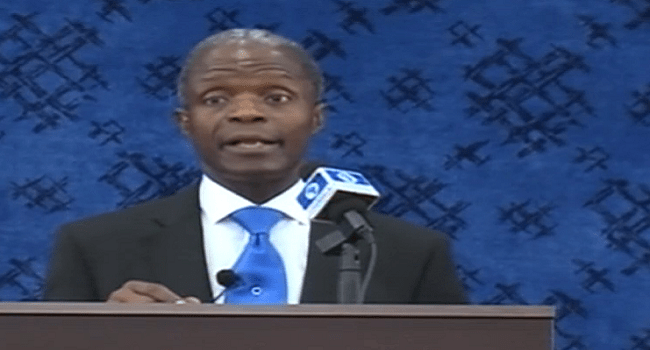 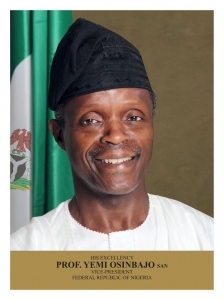 The Nigerian Vice President, Professor Yemi Osinbajo, says he is convinced that the election of Mohammadu Buhari after four attempts at the presidential elections was part of God’s plan towards the healing of the nation.

Professor Osinbajo made the statement at a Special Thanksgiving Service at the National Christian Center, Abuja, held to mark the successful swearing-in ceremony on Friday.

He identified 2015 as a significant milestone in the history of Nigeria for Mohamadu Buhari and himself.

At the service, there were prayers for the right choice of appointees to be made, as Nigerians look forward to seeing who will occupy what position in the ministerial lists.

The Vice President’s family, friends and well-wishers were at the service, thanking God for how far he had brought them in the service of their fatherland.

In his sermon, the preacher for the day said the combination of Osinbajo and Muhammadu Buhari, two thorough breeds, was not ordinary and urged them not to let Nigerians down.

Prayers and special anointing were offered for the upkeep of the Vice President’s family, friends and the nation by a representative of the General Overseer of the Redeemed Christian Church of Nigeria, Akinremi Bolaji.

Some of the special guests said the President and the Vice President had started on a sound footing, with the thanksgiving.

They are hopeful that their expectations that had been raised by the President, with his promises at the campaigns, would be met.

Some of the dignitaries at the service were; the governor of Osun State, Rauf Aregbesola, a former Minister of Education, Oby Ezekwesili and Professor Chris Imafidon, who is a media consultant.

In the next few days the President is expected to forward the list of his Cabinet members to the National Assembly for approval. It is a document many political watchers are looking forward to seeing, as it will show what the nation would expect in the next four years.

The President had said that his Cabinet would be made up of committed technocrats.