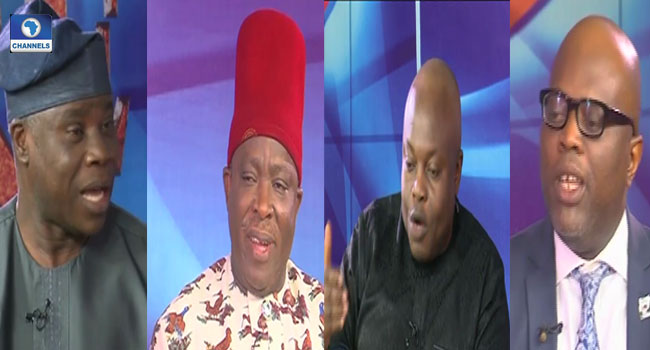 Some analysts and political stakeholders on Wednesday joined voices with opinion leaders who have previously called for restructuring in Nigeria.

Speaking on Channels Television Programme, The Core, the analysts throw their weight behind calls for restructuring citing different reasons.

Senator Victor Umeh of All Progressives Grand Alliance (APGA) believes that Nigeria was functioning well before the division into 36 states. He added that local governments in Nigeria were not created with an even parameter.

“Before the military took over Nigeria in 1967, we had regional arrangement. At that time, Nigeria was functioning well. When the military came, the four regions were disbanded and states were created starting from 12. With successive military regimes, we now have 36 states. All these 36 states, none was created through a civilian parliamentary process. These states were established with decrees.

“So in 1999, we inherited 36 states and 774 local governments all created without any form of consultation, except by military fiat.

“To us in APGA, we feel restricting is imperative. When these states and local governments were created, they were not created with an even parameter. Some people have been disadvantaged through the process of creation of states by the military. We request that they make things more equitable. The South East should be given one additional state,” he said.

However, Mark Gbillah, a member of the House of Representatives says the calls for restructuring is born out of the conception by Nigerians that the current structure is not working and there is the need for a new structure that will work.

He stressed that the ruling All Progressives Congress (APC) has individuals who prioritise the interest of Nigerians.

The National Chairman of the Abundant Nigeria Renewal Party (ANRP) Tope Fasua, believes restructuring is not just about increasing number of states but improving the state of livelihood of Nigerians.

He noted that restructuring if properly done will fix some ills in the Nigerian society.

“Restructuring should mean that a country should look at the outcome of the policies and structures it is operating and ask if it is working for the people. If it is not, then you restructure.

“Recently, we got to hear that Nigeria has 87million poor people. If a country had independence in 1960 and up till date, you are providing the largest number of poor people for the world, then your structure is not working,” Fasua said.

A Representative of The Voice of Reason, Akin Fapohunda highlighting the economic imperatives says even Nigeria’s economy is suffering based on the current structure in Nigeria which has been unable to cater for the huge number of 36 states.

Fapohunda said Nigeria, “cannot afford bi-cameral legislature, we cannot afford 36 State of Assemblies drawing money and resources. We need to operate on modular basis so that we can handle our problems on a micro scale where it applies.”