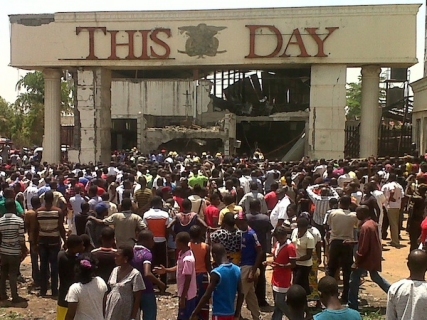 The trial of the suspected bomber of Thisday Newspaper’s office in Kaduna, Mustapha Umar could not commence at the Federal High Court in Abuja as his lawyer, Nureni Sulaiman said that he had just been briefed by the suspect.

Mr Umar was accused of bombing SOJ Plaza in Kaduna state occupied by Thisday, The Moment and The Sun Newspapers.

At the last hearing, the suspect was represented by Felix Umai and Mohammed Umar, both of Manga chambers in Abuja; he however had changed counsel as he was represented at the resumed hearing by Mr Sulaiman who told the court that he was just briefed on the case in court.

Before the adjournment, the prosecutor, Simon Labaran had asked the court to hear his application to exclude members of the public except the press and the parties to the case, from hearing the proceedings.

The defence counsel however objected saying that the constitution mandated the trial to be in the open.

The judge therefore directed the defence counsel to file his response to the application. He also directed him to file the defence of his client to the charges and front load it to enable the court handle the case with dispatch.

He also ordered that the suspect be remanded in Kuje prison even as he directed the prison officials to allow the suspect access to his lawyer and family to enable him prepare his defence adequately.

Justice Ademola also directed the prison officials to make sure that the accused was brought to court at the appropriate time.

The suspect is been charged on a one count of terrorism related act.

He was alleged to have driven a white Honda academy car with registration number AL306MKA with improvised explosives devices into the premises of SOJ Plaza and detonated same.