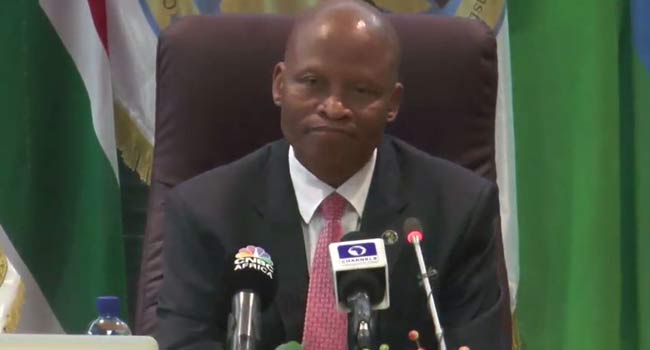 The Conference of Constitutional Jurisdictions of Africa (CCJA) has reacted to the suspension of the Chief Justice of Nigeria (CJN), Justice Walter Onnoghen, calling for strict adherence to the rule of law.

CCJA President and South Africa’s Chief Justice, Thomas Mogoeng, made this call during the 10th annual session of the Executive Bureau in Johannesburg, South Africa.

“We are concerned that there is apparent instability that affects the judiciary of Nigeria. We would always be concerned regardless of whether a jurisdiction is a member or not a member of the CCJA when developments unfold in a manner that seems to suggest that the measure of normalcy needs to be restored in order for the judiciary to be as effective as the original intent for its establishment,” he said

Although Justice Mogoeng said Nigeria is yet to be a registered member, the organisation is however worried by the development.

He, therefore, demanded that due process is followed as enshrined in the nation’s constitution be followed in dealing with the issue.

The CCJA brings together the African constitutional jurisdictions and aims to support and deepen democracy in the continent by upholding constitutionalism and the rule of law in member states.

Recall that Justice Walter Onnoghen was suspended by President Muhammadu Buhari on January 25 over an alleged false declaration of assets.

Following the suspension, Justice Ibrahim Tanko Mohammed was appointed as the acting CJN.

The President explained that the suspension was based on the request of the Code of Conduct Tribunal, pending the completion of Onnoghen’s trial.