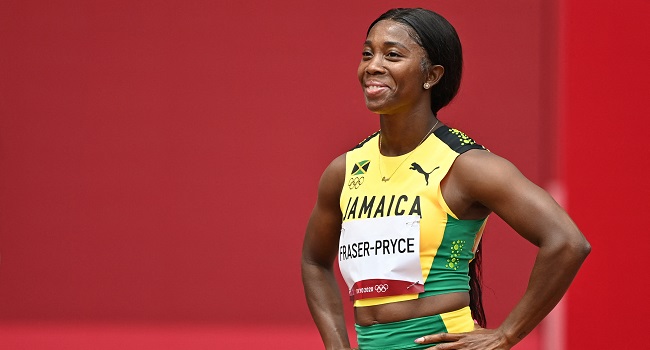 Jamaican sprint queen Shelly-Ann Fraser-Pryce made an impressive entrance at the Tokyo Olympics on Friday as South Africa’s Tatjana Schoenmaker smashed a long-standing world record in the pool.

But the shadow of coronavirus hung over the start of the athletics programme with the Australian team saying three of its members would remain isolated from the rest of the squad “as a precautionary measure” after a scare.

As the competition got underway without spectators in the 68,000-capacity Olympic Stadium because of virus restrictions, Fraser-Pryce successfully launched her bid to become the first woman to win an individual Olympic athletics event three times in the 100m heats.

The Jamaican, champion in 2008 and 2012, shut down with 20 metres remaining and strode over the line for a comfortable victory in 10.84sec.

One of her rivals, the Ivory Coast’s Marie-Josee Ta Lou, blasted to an African record of 10.78sec and reigning champion Elaine Thompson-Herah of Jamaica recorded 10.82sec on what appears to be a fast track.

The semi-finals and final of that event take place on Saturday evening.

World record-holder Karsten Warholm of Norway strolled to victory in his heat of the 400m hurdles, an event that could be one of the highlights.

“It was nice to get out on the track again,” said Warholm. “I’ve been here for two weeks already, I’m starting to get bored so it was very nice to get around.”

Two men who could push him close, the Qatari Abderrahman Samba and Rai Benjamin of the USA, also eased through to the semi-finals.

Samba said he felt the absence of spectators: “It was really, really difficult. I really missed the crowd.”

In the evening session, a new champion will be crowned in the men’s 10,000m, after Britain’s winner from 2012 and 2016 Mo Farah failed to qualify for the Games.

In the pool, Schoenmaker was overjoyed after becoming the first South African woman to win an Olympic swimming gold for 25 years as she obliterated the eight-year-old world record in the 200m breaststroke, timing 2min 18.95sec.

Australia’s Emma McKeon claimed her fourth medal in Tokyo as she blazed to the women’s 100m freestyle title in a new Olympic record of 51.96sec.

Hong Kong’s Siobhan Haughey — one of the surprises of the swimming events — earned another silver medal to add to that from the 200m freestyle.

He ended America’s stranglehold on the 200m event, which had seen them claim gold at each of the last six Olympic Games. Defending champion Ryan Murphy was second.

– Australians test negative –
Meanwhile, the head of the Australian Olympic team said two athletes and a coach had tested negative after a coronavirus scare that had briefly forced the entire athletics team into isolation, but the trio will remain in isolation.

The three were close contacts of US pole vaulter Sam Kendricks, who has been ruled out of the Games after testing positive for Covid-19.

Ian Chesterman, the chef de mission of the Australian Olympic Committee, told a press conference: “They all tested negative which is good. They also confirmed the daily test results which have also been negative and confirmed their test results before they left Australia.”

Coronavirus cases are surging in Japan a week into the Games, with the government set to extend a virus state of emergency in the capital and impose the measure in four more regions.

On Friday, Tokyo 2020 organisers reported 27 new cases related to the event — the highest daily figure yet — although they insist there is nothing to suggest a link between the Games and rising infections in Japan. 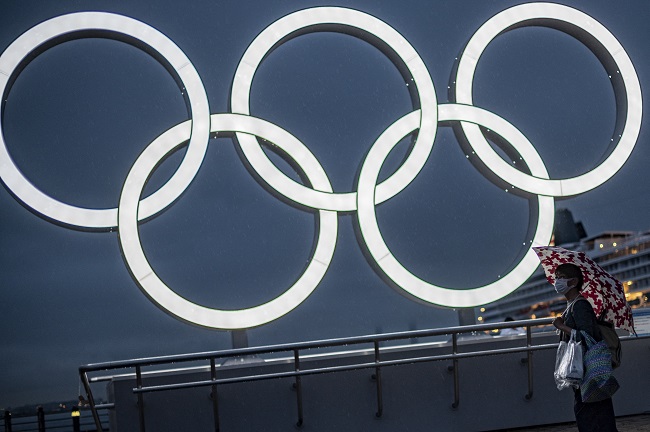 The athletes are in the Village and the world’s media has arrived, but for many in Japan, there’s little festive cheer just a day before the Olympics open in Tokyo.

There are no cheering foreign fans roaming the streets, and athletes are ferried from Village to venue in a bubble meant to keep them and the Japanese public safe from coronavirus.

Local spectators are barred from almost all Games venues, with only around 900 people expected to attend the opening ceremony at Tokyo’s Olympic Stadium on Friday — just around 150 of them Japanese.

Little surprise then that many in Japan are struggling to detect much Olympic spirit in the final countdown to a Games that are finally taking place a year after becoming the first in modern history to be postponed.

“It’s completely different from the last Games (in 1964) when the whole city was filled with festive mood,” said 80-year-old Michiko Fukui, as she strolled around the upscale Ginza district on Thursday.

The city has been adorned with Tokyo 2020 flags and advertising, and futuristic Olympic and Paralympic mascots are plastered on buses and buildings.

But there is little else to give away the fact that some of the world’s top athletes have descended on Tokyo from around the globe.

Rising virus cases in the city mean all public viewing events have been scrapped. And a state of emergency means restaurants and bars must close by 8:00 pm — when the opening ceremony begins — and they are banned from serving alcohol.

Seira Onuma was one of thousands of Japanese who competed to snag tickets in a lottery before the Games were postponed, but now she’s not even sure she’ll watch on TV.

“I won tickets for the finals of the athletics at the Olympic Stadium,” the 29-year-old housewife told AFP.

“I was so disappointed by the no-fan decision and now I’m losing interest altogether,” she said in Tokyo’s Koto area, not far from the village where thousands of competitors and officials are staying.

“I feel like I can’t really whole-heartedly welcome the Olympics and I just don’t really feel any joy in it.”

– ‘Finally starting’ –
Satoshi Hori, a resident of the Koto neighbourhood, said he wondered whether his two young daughters would even remember the Games in coming years, given the low-key mood.

“I live in Koto where a lot of the venues are, but I don’t feel any enthusiasm among my neighbours,” said the 39-year-old, who plans to watch judo and baseball on TV.

“I hope my daughters will still remember the Tokyo Olympics years from now and that the Games was actually held in our city. That’s about all I can expect.”

But others are getting into the Olympic spirit, despite the restrictions, including Yumiko Nishimoto, who lives in Fukushima where Games competition began this week with softball.

“It does feel like it’s happening,” said Nishimoto, who leads a community project to plant 20,000 cherry trees in the region affected by the 2011 tsunami and nuclear disaster.

“You get the sense that it’s finally starting.”

Spectators in the region are also barred from Olympic events, but local students plan to run a mini torch relay on the day of the opening ceremony that Nishimoto hopes will “support the Olympics”.

Public opinion polls show Japanese remain largely opposed to holding the Games this year, and most would prefer a further postponement or outright cancellation.

Koto resident Noboru Kashiwagi said the Olympics was the last thing on the minds of most of his neighbours.

“No one cares about the Olympics,” the 79-year-old said.

“Since even people living near the venues are uninterested, I’m wondering if people in other places have any interest,” he added.

“I feel sorry for the athletes. It’s not their fault.”

The 2020 Tokyo Olympics have been postponed to no later than the summer of 2021 because of the coronavirus pandemic sweeping the globe, the International Olympic Committee announced Tuesday.

The Games were scheduled for July 24-August 9, but after telephone discussions between IOC president Thomas Bach and Japanese Prime Minister Shinzo Abe, a historic joint decision was taken for the first postponement of an Olympics in peacetime.

Abe had earlier said Bach was in “100 percent agreement” when Japan asked the IOC to push back the Games.

The IOC had come under pressure in recent days to postpone the world’s biggest sporting event, with teams, athletes and sports bodies all calling for a delay.

The postponement comes after top federations announced they would pull out of the Tokyo Games, the highest-profile event to be affected by a virus that has decimated the sporting calendar.

Around 1.7 billion people across the world are in lockdown to prevent the further spread of a virus which according to an AFP tally has killed over 16,200 people and infected more than 377,000. 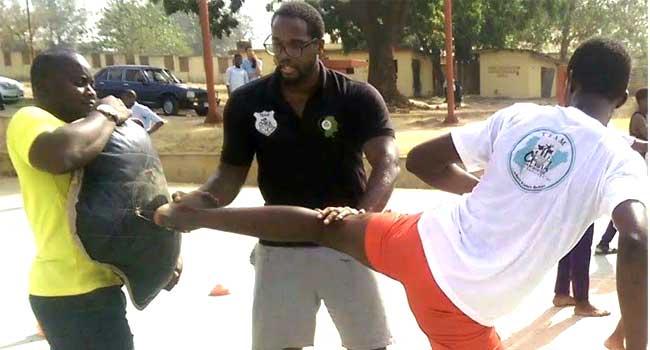 As part of efforts geared towards developing taekwondo in Nigeria, the Chika Chukwumerije Sports Foundation (CCSF) Taekwondo Team, made up of secondary school students from Government Schools, will be heading to Ahmadu Bello University Zaria to practice and learn new skills.

The event which is scheduled to take place from March 18 – 20, 2016 at the indoor hall of the university will have a total of five training segments covering: general fitness, technical-tactical training, taekwondo basics, competitive training and video analysis methodology.

According to the Team Manager for TEAM CCSF, Nicholas Olowo, “The purpose of the programme is to inspire athletes and exchange vital training methodologies using the latest daedo electronic technologies”

For Vice-Captain of TEAM CCSF, 18-year-old Peter Itiku of Government Secondary School, Garki, it is yet another exciting opportunity for the students.

“I have never been to Kaduna in my life, and now taekwondo is taking me there. We have been consistently training 4 times a week for almost a year, and we are excited to go and practice with university students in a city we have never visited,” he said.

Turning her eyes to other benefits of the trip, 14-year old Bukola Ogunnusi, the youngest member of the team explained, “I have learnt so much in the past year, not only with regards to taekwondo, but other things.

“For instance, prior to this trip, we held a meeting and had to brainstorm on everything needed for this trip – personal equipment, general equipment, number of persons and project, possible cost like accommodation, transportation, feeding etc. This is new for me, and learning how to be organized has been very helpful to my general studies.”

Coach of the ABU Taekwondo team is looking forward to working with the youngsters.

“I think that this is probably the first time in Taekwondo that a project to connect secondary school youngsters directly with university players is being undertaken.

“More projects like this undertaken over the years will ensure an early and effective transfer of knowledge to a new generation. We look forward to ensuring the success of this programme.”

Three-time Olympian, and CEO of CCSF, Chika Chukwumerije, emphasized the importance of the project.

“We did not have this kind of opportunities as 15 and 16 year olds but this is the right time to simulate these youngsters. Exposing them early is important to fire their Tokyo 2020 Olympic dream, and guide them towards a golden harvest in the next 2019 All Africa Games.”