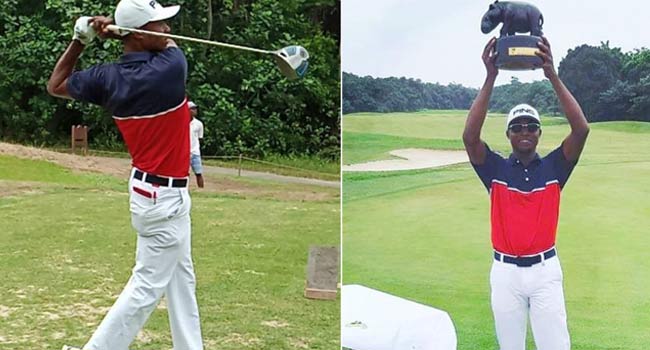 Ghana’s Vincent Torgah has emerged winner of the 2019 Eko Challenge Cup with -18 under par after 72 holes of play.

The Ghanaian started the week with an opening round -3 under par (69), tied second alongside his compatriot Emos Koblarh, who also returned a -3 under par to keep them a stroke ahead of Sunday Olapade and 2 strokes behind the day one leader Christopher Ambe who shot a -5 (67) in his opening round.

Beating his closest rival by eleven strokes, Sunday Olapade who finished 2nd opened in his first round with a (70) -2 under par and kept it going on day two with another -2 under (70) and that shot him ahead of Emos Koblarh on the leader board after the second round. Olapade also had a flawless -3 under (69) in his third round to extend his lead over Ghana’s Emos Koblarh at -7 under par before dropping a shot in his final round after failing to hold off the pressure mounted by Torgah during the final round where he carded a (73) +1 over par.

Koblarh recorded a (69)(73)(71)(72) over (72) holes to sit at solo third with a final score of -3 under par. The new entrant confirmed playing at the championship is good exposure for him. “I know the boy’s are good, so i am just here to compete with my colleagues. I am happy to have come this far he said.

Day one leader Christopher Ambe finished 4th with a (67) (75) (72) and (76). Francesco Perez of Spain and Nigeria’s S.J. Odegha finished joint 5th. MIKE UBI and Zimbabwean VISITOR MAPWANYA who holds the Lakowe Lake’s course record of -8 under par, a feet he achieved during his second round finished joint 7th.

Other players who finished amongst the top ten on the leaderboard include Cameroonian Nji Priestly who finished solo 9th while the 10th spot was shared by Kamalu Bako, Chidi Tobias, and Francis Epe.