Some communities in Nigeria have brought back memories of a time when money did not exist.

Makun Omi Town in Ogun State is not so different from many other towns in Southwest Nigeria.

Mornings in this community are greeted with the sound of chirping birds, people walking to various destinations as the day’s activities gradually unfold.

Like many other communities, visitors to the town will be quick to notice the trappings of city life creeping in.

As a result of its proximity to the waterside, residents of the small community, located some 177 kilometres from Abeokuta, the state capital, are mostly fishermen and loggers and have embraced the communal life.

What then sets the community apart? It is the return of a practice that dates as far back as 6000 BC.

Every nine days, at the Oja-Ajebo market in Makun Omi, commercial activities are facilitated not only by cash payments but through trade by barter as well.

It started by chance about 25 years ago, says, Taiwo Ajayi, one of the community leaders.

Some traders from neighbouring states became stranded in the area, and to meet their needs while there, exchanged what they had for what they didn’t have.

The practice has been maintained ever since and it has worked rather seamlessly in the community.

Money, as in the Naira, could take a back seat – sometimes.

“Most people in the riverine areas don’t have garri, so they bring their fish in exchange for garri and life goes on like that,” says the Secretary Oshobia-In-Council, Makun Omi, Biodun Odumade, as an example of what influences the barter.

Some 696 kilometers away from Makun Omi, in Cross River State, South-South Nigeria, the practice has been revived.

Every Saturday morning, as early as 6:00 am, buyers and sellers alike, arrive at the Esuk Mba market in Akpabio Local Government Area of the state.

Formerly the point of no return for slaves, the spot which houses the market is now the venue of a different kind of trade and movement.

It is an assess route for people coming from Bakassi, Cameroon and other West African nations by sea.

“You can do everything here. All the people at the waterside bring fish here in exchange for other goods,” a youth leader in the community, Asuquo Effiom, said.

Cash transactions also take place in the market for those who don’t have goods for exchange.

“I am not a farmer, so I don’t have farm products to exchange so I am coming to buy,” a community member said.

The Commissioner for Trade and Investment in the state, Peter Egba, expressed surprise that the practice was still in existence.

“It still baffles me that even up to this 21st century, that kind of trade is still going on in some places like Akpabio,” he said.

While the bartering system may have made life a bit easier for members of both communities, there is a lot the people need that they can’t simply get in exchange for a basket of fish.

So, like many other communities, they decry the lack of some basic amenities.

“Government should improve this market. The market is so poor”, a dissatisfied trader said.

Good roads, electricity, potable water, schools and efficient health care services are not things that can be acquired simply via trade by barter. 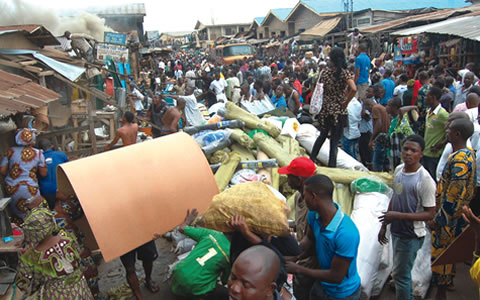