A woman has been reported killed by armed men at Tor-Musa village in Wukari Local Government Area (LGA) of Taraba State.

The council chairman, Mr Daniel Grace, disclosed this to Channels Television via telephone interview on Thursday.

He explained that suspected members of a militia group ambushed two persons travelling on a motorbike and killed the passenger while the rider was injured.

“The travellers left Donga LGA of Taraba and headed for Wukari before they were ambushed and in the process, one person was killed and the other injured; they were riding on a motorcycle,” Grace said.

He added, “The attack took place at Tor-Musa Forest, the person killed is a woman while the rider (a man) sustained several degrees of injury.”

The council boss noted that the injured victim has been taken to a hospital in Donga LGA for treatment.

The incident comes one week after a similar incident took place at Tsukundi, leading to the death of a school principal.

When contacted, the Public Relations Officer of Taraba State Police Command, Mr David Misal, said the matter has yet to be reported to his desk.

Some passengers travelling in a Toyota Hilus car belonging the Federal Ministry of Justice have been abducted by gunmen on the Abuja-Kaduna expressway.

The Kaduna State Police Command confirmed this in a statement on Tuesday, saying the travellers were kidnapped on Monday night.

According to the Police Public Relations Officer, Yakubu Sabo, the assailants intercepted the victims near Gidan Visa village, opened fire on them and shot a traveller in the process after which they were taken to an unknown destination.

He, however, said the security patrol teams within the axis quickly moved to the scene,  rescued the injured person and rushed him to the hospital.

A combined team of personnel from the Anti Kidnapping Unit, Police Mobile Force and conventional police was said to have mobilised to the area for intensive general search operation with a view to rescuing the victims and apprehending the kidnappers.

The command’s spokesman disclosed that a bank teller bearing the name of a possible victim and two footwears were recovered from the vehicle.

He, therefore, appealed to members of the public to support the police with relevant information on the whereabouts of the kidnappers and other suspected criminals in their resolve to curb the menace of banditry and other related crimes in the state.

Over the years, the Kaduna-Abuja highway has been in the news for incessant kidnappings and robbery attacks by armed bandits who terrorise motorists and residents, despite the presence of security operatives on the road. 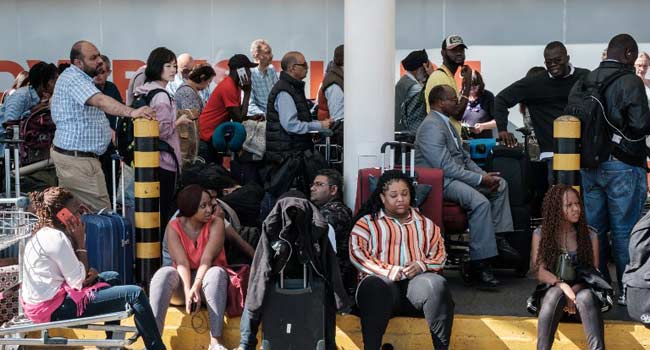 Hundreds of travellers were stranded at Nairobi’s international airport Wednesday as riot police deployed and teargas was fired to disperse striking workers.

With flights grounded since midnight, passengers were advised Wednesday morning not to come to the Jomo Kenyatta International Airport (JKIA) — East Africa’s busiest according to the Kenya Airports Authority (KAA) — until further notice.

“Kenya Airways regrettably wishes to inform its customers and the general public that due to the illegal strike by Kenya Aviation Workers Union (KUWA), the airline will be experiencing disruptions in normal flight operations,” a company statement said.

Inside the terminals, strikers faced off with police who fired teargas as they moved in to arrest union officials they accused of inciting workers.

Passengers waiting for flights, some for hours, were asked to leave the airport and gathered in parking and waiting areas outside the building.

“I have been here since 3:00 am, and there is no flight, there is no information, we have just been told now to wait for communication,” stranded passenger Mercy Mwai told AFP.

Another, Christine, questioned: “why are police using unnecessary force with teargas at an airport?”

Some passengers received medical treatment on-site for tear gas inhalation, according to an AFP journalist at the airport.

The workers, who had not announced their labour action beforehand, are angry about the planned takeover of the airport, operated by the state-run KAA, by national carrier Kenya Airways.

“What they were fearing is that the proposed merger between KQ (the acronym for Kenya Airways) and KAA will result in job losses but we gave assurances that that will not happen,” he told journalists at the airport, and promised flights will resume shortly.

“So this (strike) is completely uncalled for because the deal has not happened.”

Kenya Airways chief executive Sebastian Mikosz said 24 departing flights, and two arrivals, were affected by the strike, but “we expect the situation to normalise during the day.”

“We are set to resume operations, although the process is a bit slow,” he said. “Our flights to London, Dubai, and Mumbai will be departing shortly.” 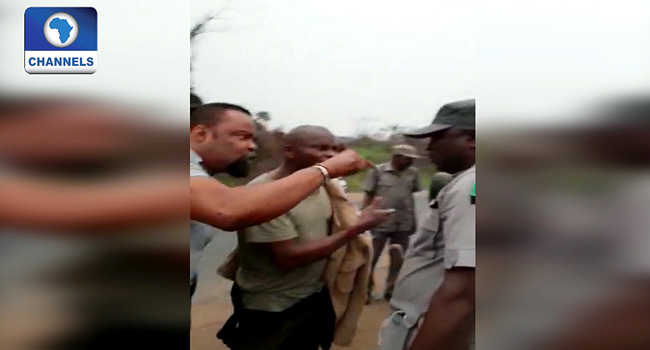 A video has emerged online showing the killing of a man allegedly by officials of the Nigerian Customs.

In the video, several commuters apparently from a commercial bus are seen arguing with Customs officials, with several other commuters from other vehicles watching.

Amid angry scenes, a passenger can be heard warning an official not to touch his phone, while some others were arguing with another official. As the argument continued, a voice is heard saying, ‘Shoot him’ and a gun went off immediately after.

The sound of the gunshot is believed caused some of the people at the scene to flee with some others repeatedly shouting in pidgin English that the Customs officials have killed someone.

While the video did not capture the officer who pulled the trigger, it showed one of them clutching a gun standing over the body of the man who had been shot.

After lifting the man’s hand, and seeing it fall limply to the ground, the official and his colleagues tried to get back into their cars, but the civilians at the scene rallied and prevented them from leaving.

He, however, said contrary to claims that the person killed was a passenger, the man who was shot was a friend of the officials.

According to the Customs, the incident occurred during an attempt to obstruct the lawful performance of duty by passengers of a commercial bus (a white Toyota Hiace) suspected to be carrying bales of used clothing.

Attah said that preliminary findings indicate that the deceased identified simply as Godwin was hit accidentally “during the skirmishes and struggle [by the passengers] to disarm the officer”.

The attention of the Nigeria Customs Service has been drawn to a disturbing video going viral with conflicting narratives.

While it is painful and totally unnecessary to lose lives in anti-smuggling operations, today at Sagamu Interchange along Ijebu Ode, attempt to obstruct lawful performance of duty by passengers of a commercial bus (a white Toyota Hiace) suspected to be carrying bales of used clothing led to the death of a young man (Godwin) and serious injury of a Customs Officer ASC 1, Destiny Onebanho.

Contrary to some narrative, the young man was not a passenger of the bus but a good citizen who always comes to fetch water for Customs patrol men anytime they return to base.

Preliminary findings indicate that it was during the skirmishes and struggle to disarm the officer that the rifle discharged and the friend of the Customs (Godwin) who lost his life.

The Service is already in touch with the bereaved family.

Sadly, it should be noted that while attention shifted to the dead and the wounded, the passengers who filmed with incited commentary boarded their vehicle and left, leaving the wrong impression that it was one of them that was killed.

While the wounded officer is under intensive care at the hospital, the patrol team has been recalled to the office for further investigation. 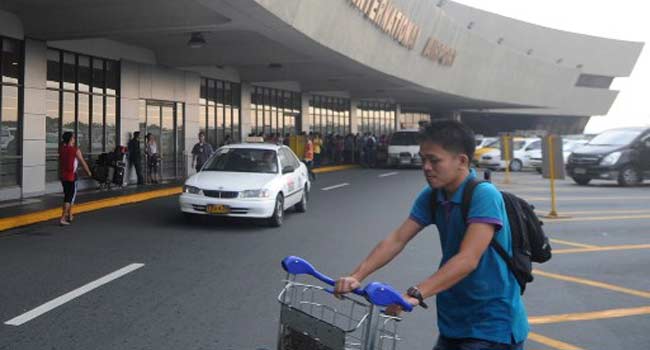 The United States has warned its citizens that security at the Philippines’s main airport does not meet international standards, urging travellers to exercise “increased caution”.

The US Department of Homeland Security issued a travel advisory on Wednesday saying security at Manila’s Ninoy Aquino International Airport was not “consistent” with International Civil Aviation Organization (ICAO) standards.

“Exercise increased caution when traveling to or from Ninoy Aquino International Airport,” the US embassy in Manila said on its website citing the advisory.

The advisory was based on an assessment by security experts from the Transportation Security Administration (TSA), the US homeland security department said without specifying the findings.

Once derided as the world’s worst airport due to leaking toilets and creaking facilities, the Ninoy Aquino International Airport is the primary gateway to the Southeast Asian nation.

A statement on the US homeland security department website said that the agency had directed airlines issuing tickets for travel between the two nations to notify passengers of the assessment.

It added that TSA representatives have been working with the Philippine government “assist airport and transportation authorities in bringing (the Manila airport) up to international security standards”.

“All points raised by the transportation security administration TSA auditors have either been addressed or are in the process of being addressed,” Monreal told reporters, adding that Manila airport was “very, very safe”.

Monreal said TSA auditors were in the Philippines in September and had observed that the Manila airport had some gates with faulty locks while security checkpoints were inconsistent.

He added the Philippines had hired additional guards and would procure x-ray machines to comply with the TSA recommendations.

The Manila airport topped the list of worst airports on the travel website “The Guide to Sleeping in Airports” from 2011-2013, causing the government to make major renovations.

The airport is notorious for flight delays and its security personnel had faced allegations of extorting money from passengers.

In 2013, a gunman opened fire outside the airport, killing four people including a town mayor. Lawmakers then criticised the lack of functioning CCTV cameras in the area. 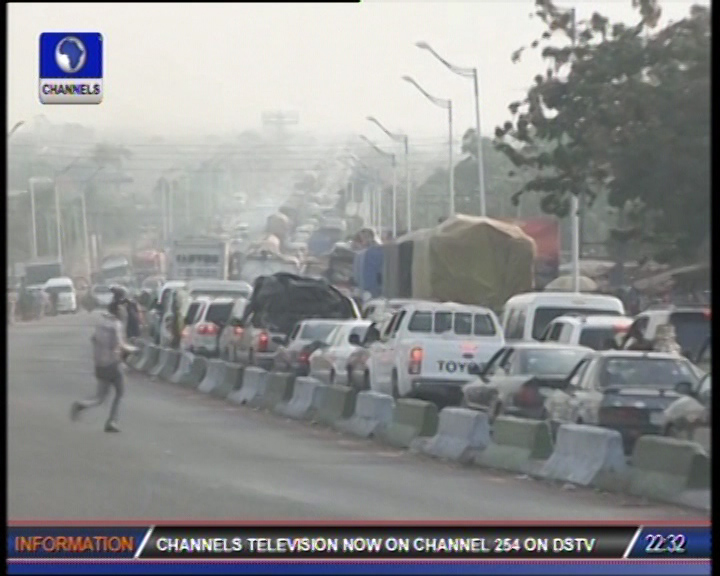