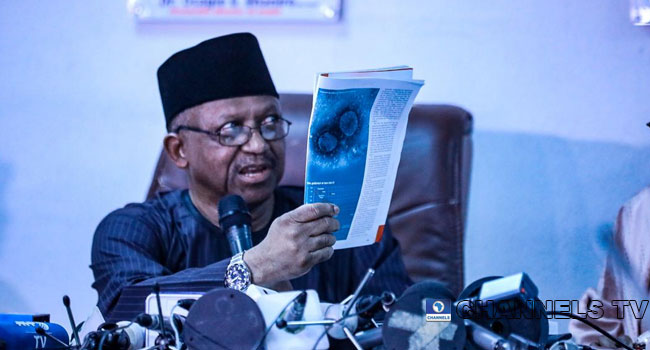 The Nigerian government says it has received a protocol from the Chinese government to treat persons infected with the novel coronavirus.

The Minister of Health, Dr Osagie Ehanire, disclosed this at a news conference on Friday in Abuja following the confirmed case of the virus in Lagos.

He explained that the government of China, were the first case of coronavirus was reported, has succeeded in treating thousands of people infected with the virus.

“We have received a lot of cooperation; two visits already from the Ambassador of China to Nigeria to reassure us of his commitment and to give us support in any way.

“They sent us a treatment protocol because they have successfully treated over 5,000 people in their country,” the minister told reporters at the Federal Ministry of Health secretariat in the nation’s capital.

Ehanire addressed the news conference in company with the Minister of State for Health, Olorunnimbe Mamora, and top officials of the ministry on measures being put in place to contain the spread of the disease.

Nigerians woke up to the news of the confirmed case of coronavirus on Friday, involving an Italian citizen who arrived in the country for a brief business visit on Tuesday.

The patient was said to have fallen ill the next day and transferred to the Lagos State Biosecurity Facilities for isolation and testing.

In his briefing, the minister explained that the Italian national had reported at a hospital in Ogun State where he was referred to Lagos after testing negative to malaria.

He added that the patient was transported in a special ambulance driven by a well-kitted driver.

Upon his arrival at the Lagos University Teaching Hospital (LUTH), the Italian tested positive to coronavirus.

According to the minister, the Federal Government is well-prepared and working closely with the World Health Organisation (WHO) to contain the disease,

He revealed that the government has approved and disbursed all funds needed by the Port Health Services and the Nigeria Centre For Disease Control (NCDC) which he described as the nation’s first and second lines of defence for coronavirus.

“The Federal government has released every amount of money that the NCDC and the Port Health Services requested,” Ehanire said.

The minister added that the Port Health Services has been paid over N70 million while the NCDC has received N620 million.

He also admitted that they used to have very little quantity of reagents to diagnose the virus, but they have improved the supply of the substances.