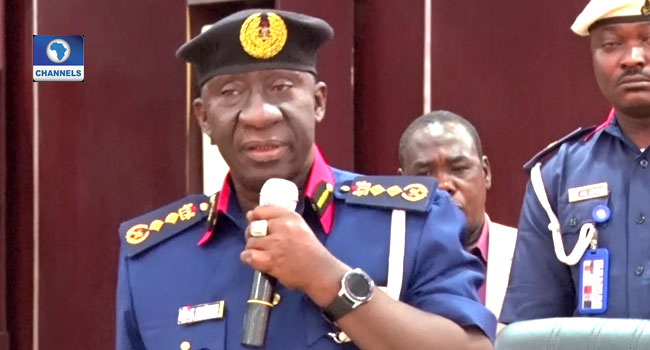 The Commandant General of the Nigeria Security and Civil Defence Corp (NSCDC) Abdullahi Muhammadu on Thursday directed all officers who bare firearms to always maintain distance from the crowd during public functions.

He warned that the arm-bearing officers should keep a distance of at least 50 meters from the crowd, especially at public events and functions.

“I have called my state commandants all over the country. I have told them that on no occasion whatsoever should armed men go 50 meters close to any crowd,” Muhammadu said.

The NSCDC boss disclosed this during a visit to the Imo State Governor Senator Hope Uzodinma at Owerri the Imo State Capital over the death of Mr Ndubuisi Emenike who was accidentally shot dead by an NSCDC official two weeks ago.

He explained that the agency has launched an investigation into the matter of the trigger-happy officer adding that he will be dismissed and made to face the wrath of the law.

He also ordered that no NSCDC official should jubilate or celebrate by firing arms at any function.

“On no occasion should armed men be celebrating with firearms,” he said.

The Imo State Governor Uzodinma who was represented by the secretary to the state government Cosmos Iwu in response described the death of Ndubuisi as an unfortunate one.