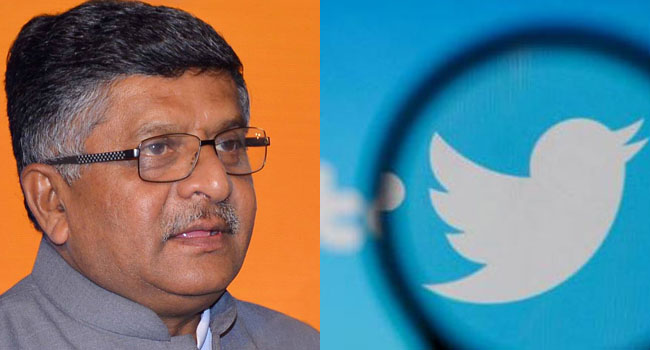 India’s IT minister on Friday accused Twitter of briefly blocking his account because of criticisms he made of the US firm in a standoff over new social media rules.

Ravi Shankar Prasad said that in a “gross violation” of Indian regulations, he was without warning informed that his account was locked because of an infringement of US copyright law.

The account remained out of action for almost an hour, he said.

“It is apparent that my statements calling out the high handedness and arbitrary actions of Twitter, particularly sharing the clips of my interviews to TV channels and its powerful impact, have clearly ruffled its feathers,” Prasad tweeted after his account was restored.

“Twitter’s actions indicate that they are not the harbinger of free speech that they claim to be but are only interested in running their own agenda, with the threat that if you do not tow the line they draw, they will arbitrarily remove you from their platform,” he added.

The US firm has been locked for several months in a row with New Delhi over new rules for social media companies operating in India.

The regulations require firms to remove and identify the “first originator” of posts deemed to undermine India’s sovereignty, state security or public order.

Social media companies and privacy activists fear the vagueness of the rules means they could be forced to identify the authors of posts critical of the government.

Prasad on Friday said Twitter had not been adhering to the new rules because “it would be unable to arbitrarily deny access to an individual’s account which does not suit their agenda”.

Twitter insisted last week that it was making every effort to comply with the guidelines.

WhatsApp is challenging the rules in court, fearing that it will have to break its system of encryption that prevents anyone other than the sender and receiver from reading messages.

Last week, Twitter’s top executive in India was summoned by police after a video of a Muslim man being assaulted went viral on the platform. Police accused Twitter of stoking sectarian tensions.

In May police visited Twitter’s offices to serve a notice to the US company over its failure to remove a “manipulated media” label that it had placed on a tweet by the ruling party’s spokesman.

Twitter responded by accusing the authorities of “intimidation tactics”.

The government says it recognises and respects the right to privacy and that the new rules are only to prevent “abuse and misuse of social media”.