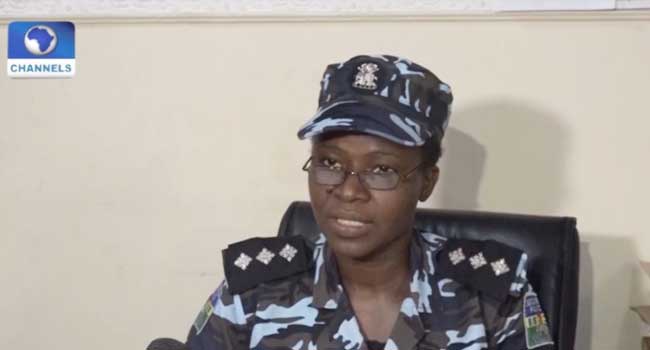 The Delta State Police Command has reacted to the viral video of the alleged shooting of a young man in Ughelli, Delta State by the operatives of the Special Anti-Robbery Squad (SARS).

Reacting to the post which said the young man was shot and left to die, the police debunked this claim, explaining that he sustained injuries after jumping from a moving car while trying to evade police arrest.

The Police spokesperson in Delta State, DSP Onome Onovwakpoyeya, explained that the victim was arrested with a White Lexus Jeep without registration, “parked by the roadside which on sighting police patrol team, the driver immediately zoomed off at high speed in a suspicious manner.”

Onovwakpoyeya said the police team gave the Lexus Jeep a hot chase and eventually intercepted the vehicle and arrested the two occupants.

“On their way to the station with the arrested suspects inside the police patrol vehicle, the suspect jumped out of the moving vehicle and sustained body and head injuries,” she added.

The police spokesperson said further that the police tried to rescue the victim but an angry mob came out to attack them, thereby forcing them to leave the scene to avoid a violent confrontation with the mob.

She concluded that “the patrol team immediately visited the victim at the hospital where he is still alive and recuperating.”

The police reaction follows Saturday’s outrage on Social media which was triggered by the viral video shared on Twitter with the post “a young boy dead at Ughelli, Delta state . .  . in front of Wetland hotels. They left him for dead on the roadside and drove away with the deceased Lexus jeep,” by a user.

SARS just shot a young boy dead at Ughelli, Delta state as we speak. In front of Wetland hotels. They left him for dead on the road side and drove away with the deceased Lexus jeep.

The #EndSars hashtag was the number one trend on social media app, Twitter for several hours on Saturday, bringing back to the fore calls for the proper handling of high-handed police officials.