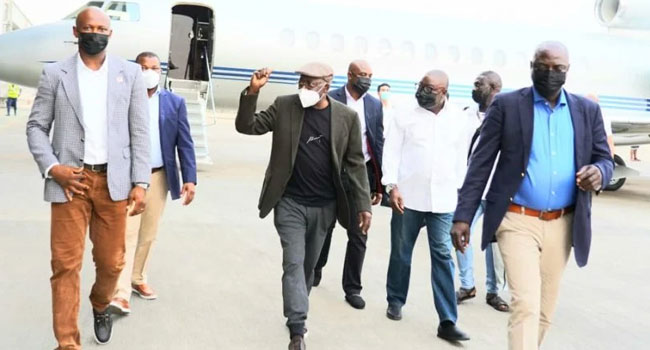 The All Progressives Congress (APC) National Leader, Bola Tinubu, has returned to Nigeria after his trip to the United Kingdom (UK).

The former Lagos governor arrived at the Murtala Muhammed International Airport in Lagos on Sunday.

This was confirmed to Channels Television on Monday, by his spokesperson, Tunde Rahman.

Photos of Tinubu’s arrival were also shared on his official social media handle.

“Arriving Lagos after 10 days of consultations with Nigerians and other stakeholders in the diaspora, Asiwaju Bola Ahmed Tinubu promised to continue consultations in line with his intention to seek the office of The President of the Federal Republic of Nigeria,” the post read.

The former Lagos Governor, in January, declared interest in contesting the 2023 presidential election after a visit to President Muhammadu Buhari at the State House.

He left the country in January after weeks of consultations across the country over his 2023 presidential ambition.

Before the UK trip, Tinubu had traveled to some parts of the country including Oyo, Niger, and Zamfara states to widen consultations for his political ambition.