Nigeria’s Golden Eaglets put the final nail on the coffin of Iraq, defeating the Asians 5-nil in what was seen by many as a one sided affair at the FIFA U-17 world cup.

The Golden Eaglets started like a house on fire with 4 first half goals, Musa Mohammed, Chidiebere Nwakali and Musa Yayaha all got on the scorer sheet.

The Manu Garba led boys started from where they left off in the first half as substitute Chigozie Obasi’s goal in the 90th minute made it 5 for Nigeria.

Elsewhere in group F, Mexico defeated Sweden 1-0. With this results Nigeria top the group with 7 points, followed by Mexico with  6 points, while the Sweedes have 4 and Iraq finished with no point.

Nigeria has now qualified for the round of 16 and will be facing the second placed team in group E.

Nigeria has not lost a group-stage game at any U-17 World Cup since way back in 1993.

Meanwhile President Goodluck Jonathan has congratulated the Golden Eaglets of Nigeria on their 5-0 defeat of Iraq in the on-going FIFA Under-17 world cup in the United Arab Emirates.

President Jonathan urged them to maintain the exemplary dedication, commitment and resilience they have exhibited thus far in the competition until ultimate victory is achieved.

He assures them of the support of the Federal Government as they continue in the competition. 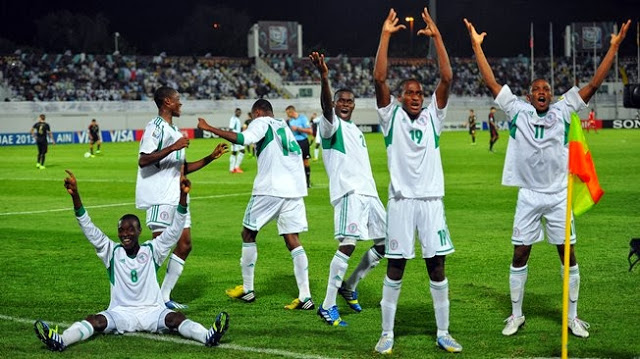 Three-time champions Nigeria opened their 2013 FIFA U-17 World Cup campaign on Saturday with a 6-1 thumping of twice champions and title-holders Mexico in Al Ain City.

In the opening Group F match at the competition holding in the United Arab Emirates (UAE), the Golden Eaglets overcame a nervous start to go top of the group. Nigeria now lead the group with three points and a +5 goal difference from one match, ahead of Sweden and Iraq.

The Mexicans were unable to take advantage of their opponents’ trepidation, as striker Ulises Jaimes had a chance to score with his head after only three minutes.

But the Nigerian defence deflected the ball wide off danger to get a respite until after about 30 minutes when the Eaglets settled into their rhythm.

After 33 minutes, the Eaglets followed on a counter-attack for Success Isaac to race in and round the goalkeeper, before pulling the ball back across goal. Kelechi Iheanacho followed the play with a clever finish, hitting the ball high into the net over a pair of Mexican defenders.

Seven minutes later, the Eaglets scored again, after Isaac crossed from the left following a fast-break. Iheanacho kept his cool to cut inside, showing great patience to drift past two defenders and slam into the side netting.

But the Eaglets’ enthusiasm got the better of them as they conceded a goal a minute later, after failing to clear their lines. The ball fell kindly in the goal area for Jaimes who rounded his marker to score with a low shot to the corner.

However, Iheanacho claimed his hat-trick four minutes into the second-half, slamming home a low and hard shot at the near post after a flick-on from a long throw-in.

Chidiebere Nwakali made it 4-1 three minutes later with a shot from 25 yards out, while Isaac made it 5-1 on the hour mark when he raced on to a through-ball.

He slalomed through two Mexican defenders before firing inside the near post from 12 yards out. Iheanacho cut in from the right side after 70 minutes to strike from a long way out to make it 6-1.

Nigeria will face debutants Sweden in their next match on Tuesday, Oct. 22 at the same Khalifa Bin Zayed Stadium.