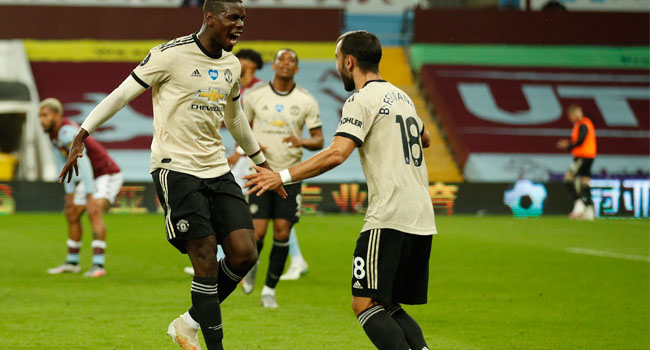 Manchester United should see success as winning the Premier League, not just making the top four, said Paul Pogba after netting his first goal for over a year in another comfortable 3-0 win for the Red Devils at Aston Villa.

United became the first side in Premier League history to win four straight games by a three-goal margin as they closed to within a point of fourth-placed Leicester with the in-form Bruno Fernandes and Mason Greenwood also on the scoresheet.

Pogba missed the majority of the season prior to the coronavirus shutdown due to injury, but believes United must aim higher next season in the pursuit of newly-crowned champions Liverpool and Manchester City.

“We are really pleased with ourselves, but we know we have to carry on as well,” Pogba told Sky Sports.

“We are talking in training that we have to carry on, that’s what Manchester is, it is a big club and the performances the last few weeks are the standard of Manchester.

“We didn’t win the Premier League, that’s the standard, we didn’t win anything yet so there is a lot of work to do.”

United could still end the season with two trophies as they face Chelsea in the FA Cup semi-finals on July 19 before restarting their Europa League campaign in August.

“This year we have two goals, to go for the Europa League and the FA Cup so we go for that,” added Pogba.