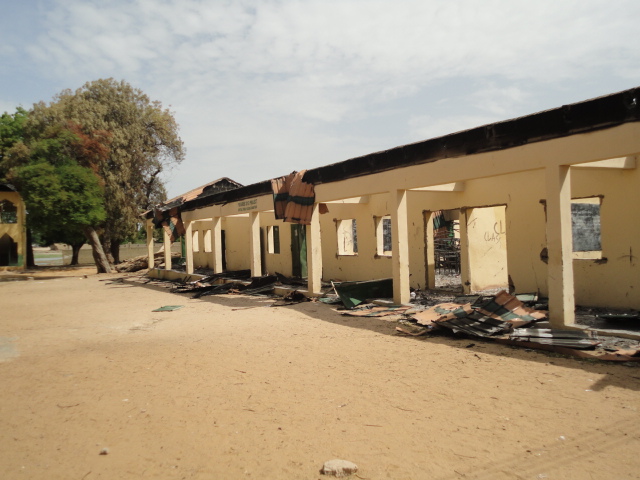 The governor of Yobe State, Alhaji Ibrahim Gaidam has vowed to re-construct all the schools and churches destroyed in Monday’s attack by Boko Haram, in Damaturu, the state capital on Monday.

Alhaji Gaidam made this known on Thursday, when he visited places ravaged by the violence and gun feud between members the sect and security operatives in the state.

Places visited by the governor include Bundigari and the Central Primary School, Damaturu, which was razed down. The governor condemned the attacks in its totality.

The 24 hour curfew imposed on the state since Tuesday, was earlier relaxed across the city.

The state’s Commissioner of Education, Alhaji Malla Musti who briefed the governor at the affected sites said all the schools burnt were four in number and he called for prompt re-construction, as the schools are key to the educational development of the state.

Visiting the affected churches, the secretary of the state’s Christian Association of Nigeria (CAN), Elder Peter Oguche, told the governor that six churches were burnt during the attacks.

The destroyed churches include; the COCIN Church in Shagari Low-Cost and that of Bakin-Kogi as well as the Unity Chapel, Goodness Church, Christ Chosen Church and Redeem Assembly.

Mr Gaidam condemned the acts and called for immediate estimates of the affected schools and churches, as he gave the assurance that all the burnt structures will be reconstructed.

He regretted that the money which would have been channeled into other developmental projects will now be used in the re-construction of the destroyed buildings.

The governor said those behind the attack will surely face the wrath of the Almighty and he called on the people to live peacefully with one another as Prophet Mohammed during his time also lived peacefully with other non-Muslims.

He also called for prayers and cooperation of the citizenry for the security agents who according to him are working day and night to restore peace in the state.DAMATURU METROPOLIS REMEND DESERTED DESPITE RELAXATION OF CURFEW    21-06-2012

Deserted Damaturu
Despite the relaxation of the 24 hour curfew in Damaturu, residents of the Yobe state capital can still not come out for either work or business.
Our correspondent Jonathan Gopep, who went round the city on THursday, observed that shops and offices were closed in what can be blamed on fear of the unknown.
Buses and taxi drivers did not come out for their usual hustle and bustle and a few people resorted to trekking to their inevitable places.
Financial institutions and markets were all locked up as well for the fear of further attack.
The few people that had the courage to come out either by trekking or driving were subjected to severe security checks by the police and the Joint Task Force (JTF).