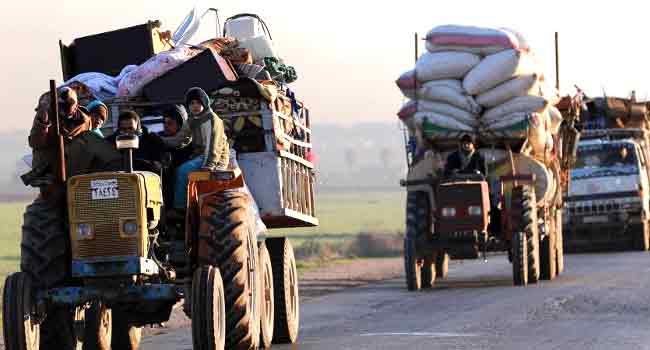 Syria denied on Wednesday carrying out chemical weapons attacks against rebel-held areas, denouncing recent accusations by the United States and France as “lies”.

“Syria condemns all the lies and allegations by the American and French foreign ministers about chemical weapons use in Syria,” a foreign ministry official told state news agency SANA.

Twenty-one people were treated for respiratory problems after rockets were fired on the rebel bastion of Eastern Ghouta outside Damascus on Monday, which residents and medical sources said contained chlorine.

In response, 24 governments approved a new “partnership against impunity” for the use of toxic weapons at a meeting in Paris on Tuesday.

Speaking after the meeting, US Secretary of State Rex Tillerson said Damascus ally Moscow must be held responsible for the “apparent chemical attack”.

“Whoever conducted the attacks, Russia ultimately bears responsibility for the victims in East Ghouta and countless other Syrians targeted with chemical weapons, since Russia became involved in Syria,” Tillerson told reporters.

And France announced sanctions against 25 people and companies it said were linked to Syria’s alleged chemical weapons.

Syria has staunchly denied the claims, pointing to its 2013 handover of its chemical stores as part of a deal between the United States and Russia.

That agreement came after accusations that Damascus used sarin gas on Eastern Ghouta in August 2013.

“Syria has constantly cooperated and provided the conditions to carry out an honest, objective, and professional investigation into chemical weapons use,” the foreign ministry official said.

“But the clique of Western imperialists always impeded it,” the official added.

Damascus has been repeatedly accused of using chemical weapons even after the 2013 deal.

The United Nations found that Syrian government forces were responsible for chlorine attacks on three villages in 2014 and 2015.

And last year, the UN and others blamed regime forces for an April 2017 sarin gas attack on the rebel-held town of Khan Sheikhun that left scores dead.

Regime ally Russia cast back-to-back vetoes in November to block the renewal of a probe to identify the perpetrators of chemical attacks in Syria.

Moscow has dismissed the most recent allegations.

It accused Western governments on Tuesday of trying to sabotage a planned peace conference for Syria in the Russian Black Sea resort of Sochi next week. 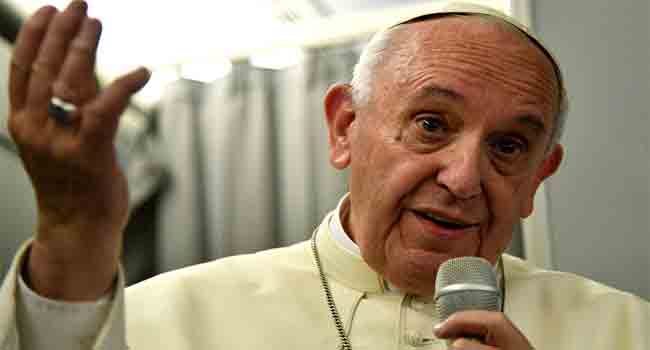 Pope Francis on Wednesday made a fresh appeal for calm in the Democratic Republic of Congo after a bloody crackdown on anti-government marches organised by the country’s powerful Catholic Church.

Six people were killed, scores injured and dozens arrested, according to the UN peacekeeping mission MONUSCO, when security forces opened fire on Catholic-organised rallies against President Joseph Kabila on Sunday. The government has put the death toll at two.

“Unfortunately, worrying information continues to reach us” from DR Congo, the pope said at the end of his weekly audience to a crowd in St. Peter’s Square.

“I renew my call for everyone to work to avoid any form of violence,” he said.

“For its part, the Church wants nothing more than to contribute to the peace and the common good of society,” said the pope, whose close ally Cardinal Laurent Monsengwo, archbishop of Kinshasa, is at the forefront of the mobilisation.

Kabila, 46, has been in power since 2001, at the helm of a regime widely criticised for corruption, repression and incompetence.

His constitutional term in office expired in December 2016 but he has stayed on, stoking a bloody spiral of violence.

Under a deal brokered by the Catholic Church, he was allowed to stay in office provided new elections were held in 2017.

The authorities then postponed the election until December 23 this year, citing what they said were logistical problems in preparing for the vote.

Marches on Sunday and New Year’s Eve urged Kabila to publicly declare that he would not stand again in December.

The delay, coupled with the mounting violence, has placed Kabila on collision course with the church, which has a prominent role in DR Congo due to its educational and social care work.

Monsengwo on Tuesday denounced the crackdown, saying the security forces had been “more armed than on a battlefield”.

“We want the force of the law to reign and not the law of force,” the cardinal said in a press conference. 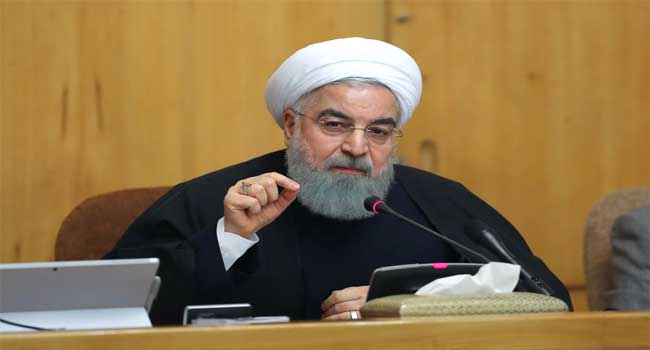 AFP journalists were able to access the service on Sunday and officials confirmed it has been restored.

“The information concerning the end of filtering on Telegram is correct,” a spokesman for the telecoms ministry told AFP.

Telegram, which counts some 25 million users in Iran, was blocked on mobile phones during the five days of unrest that hit dozens of cities over the new year.

The semi-official ISNA news agency said the restrictions on Telegram had been “entirely lifted under orders of (President Hassan Rouhani).”

Rouhani said during the unrest that the restrictions were necessary, but should not be “indefinite”.

He accused conservative opponents of using the protests to impose widespread censorship.

“You want to take the opportunity to shut down this social media for eternity. You might sleep well, but 40 million people had problems… 100,000 people lost their jobs,” Rouhani said on January 9, referring to complaints that many businesses were hit by the Telegram shutdown.

The head of the country’s cybercrime committee, Abdolsamad Khoramabadi, had earlier criticised the government for not blocking Telegram sooner, and said officials should be “punished” if it was found they deliberately failed to act against online “trouble-makers and enemies”.

Conservatives have also called for the development of local apps to replace Instagram and Telegram.

Rouhani’s support for temporary restrictions still represented something of a reversal for a president who has vowed to end all online censorship.

Just three weeks before the unrest, on December 19, Rouhani told the country’s first conference on civil liberties: “We will not seek to filter social media. Our telecoms minister promises the people he will never touch the filtering button.” 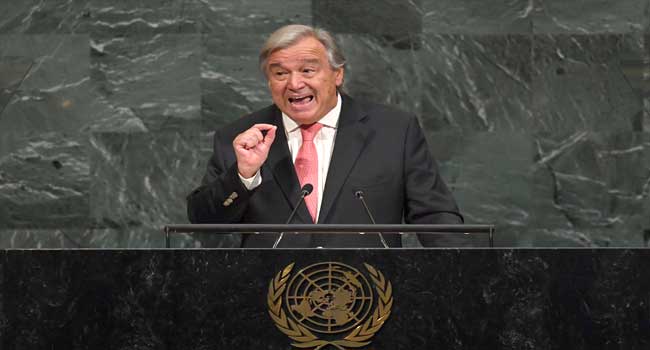 The UN said it was “deeply alarmed” by the actions of security forces in DR Congo during anti-Kabila protests in Kinshasa last Sunday, and believe the toll of victims during the crackdown “may be higher”.

“Our colleagues on the ground were denied access to morgues, hospitals and detention centres. They were sent away from some sites by defence and security forces,” the Office of the United Nations High Commissioner for Human Rights (OHCHR) said from Geneva in a statement on Friday.

The organisation said at least five people were known to have been killed and 92 injured. Around 180 were arrested, most of whom have now been released, it said.

The DR Congo government said nobody was killed Sunday in connection with the marches, which were organised by the Catholic Church.

Together with opposition groups, the Church was demanding that President Joseph Kabila — in power since the assassination of his father in 2001 — will declare he will not stand for re-election in 2018.

The protests took place on the first anniversary of a deal under which Kabila was scheduled to leave office in 2017 after fresh elections.

The poll has since been postponed until December 2018. Western powers have accepted the delay with reluctance, hoping it will avoid bloodshed and encourage stability in this vast and volatile central African country.

The OHCHR called for “credible and independent investigations into alleged use of excessive force”.

“The Government should ensure that everyone, including political opponents, journalists and civil society representatives, are able to fully exercise their right to freedoms of association and peaceful assembly, opinion, and expression,” it said.

The latest spike of fighting between Ukraine’s army and Russian-backed rebels has killed five people, in the heaviest daily toll over the past weeks of the simmering conflict, officials said Saturday.

The Ukrainian military reported the death of four soldiers in clashes in the area north of the insurgents’ de facto capital of Donetsk, while a separatist news agency said one rebel fighter had been killed.

“The situation in the anti-terrorist operation zone has deteriorated,” the Ukrainian army said in a statement, referring to the conflict in two breakaway provinces in the country’s industrial east.

Another two soldiers were wounded in mortar fire, it said, accusing rebels of using heavy weapons banned by ceasefire agreements.

A series of periodic truce deals have helped lower the level of violence but not fully end bloodshed in the European Union’s backyard.

The war in the former Soviet republic broke out in April 2014 and has claimed more than 10,000 lives.

Europe’s only active conflict has plunged relations between Moscow and the West to a post-Cold War nadir and unsettled other Russian neighbours.

Ukraine and its Western allies accuse Russia of funnelling troops and arms across the border to fan the flames of the conflict.

Moscow has denied the allegations despite overwhelming evidence that it has been involved in the fighting and its explicit political support for the rebels. 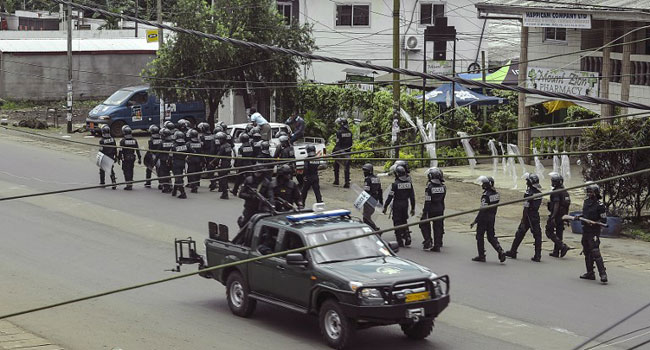 At least 17 people were killed over the weekend in clashes linked to a symbolic declaration of independence by Cameroon’s anglophone minority, sources said on Monday.

Amnesty International said “at least” 17 people were killed by security forces in the country’s two English-speaking regions, a figure that concurred with a toll given by official sources, who added that two Nigerians were among the dead.

Separately, the governor of the Northwest Region, which with the Southwest Region comprises the chief anglophone area, said on state radio that 11 had died in his region.

An earlier tally compiled by AFP put the death toll at seven, who were shot dead by security forces.

English-speakers, who comprise about a fifth of Cameroon’s population of 22 million, say they suffer discrimination and inequality at the hands of the francophone majority — a resentment that led to a symbolic declaration of independence on Sunday.

President Paul Biya has opposed any secession or move to a federal state.

Cameroon was a German colony from 1884 until 1919, when it was split into British- and French-run entities at the end of World War I.

The anglophone-francophone rift of today dates back to 1961, when the British-administered Southern Cameroons united with Cameroon after it gained independence from France in 1960.