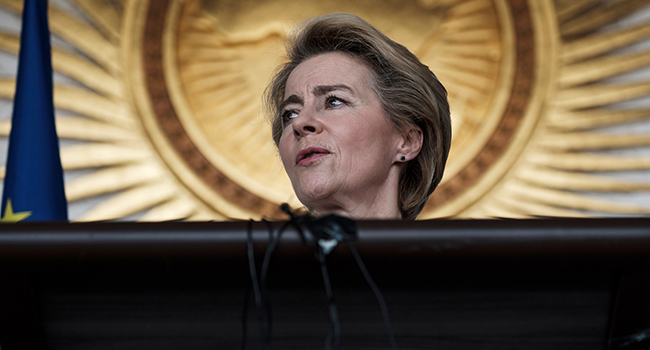 European Commission president Ursula von der Leyen assured Africa of the EU’s strong support during a visit to Ethiopia on Saturday, her first trip outside Europe since assuming her post.

The former German defence minister, who took office on December 1, landed in the capital Addis Ababa in the morning and headed to the African Union headquarters for talks with AU chief Moussa Faki Mahamat.

“For us, for the European Union, you are more than just a neighbour.”

Von der Leyen, who has prioritised the fight against climate chang, said the EU and AU could collaborate on the issue.

“You here on the African continent understand climate change better than anyone else,” she said.

She and Faki also discussed migration and security issues.

“Honestly I don’t have all the answers to these challenges but I am convinced that together we can find answers,” she said.

Faki for his part called for greater international mobilisation to counter security threats, including terrorism.

‘We are at your side’

“I think that Ethiopia has given hope to the whole continent,” she said, adding that “I want you to know that we are at your side”.

Abiy thanked her for the EU’s support but said he hoped for more funding to spur economic reforms.

“We’re still demanding more financial support because we are ambitious. As Madam President mentioned, when you are a young prime minister you are also more ambitious and you want to deliver more,” said Abiy, who will receive his Nobel in Oslo on Tuesday.

The EU and Ethiopia also signed agreements worth 170 million euros ($188 million) on Saturday.

Of that sum, 100 million euros will go towards transport and infrastructure in the East African country, 50 million for the health sector, 10 million for job creation and 10 million for elections ahead of landmark polls next year.

Speaking to journalists after her meetings, von der Leyen said it was “important” for the EU to continue to support Abiy’s ambitious reform agenda.

“They have started but we need a long breath to see the effects that these reforms are bringing along,” she said.

The EU is Africa’s largest trading partner and biggest source of foreign investment and development aid.

But the two blocs have struggled in recent years to find ways to curb the number of African migrants heading north to Europe using perilous sea routes.

Just this week at least 62 migrants died when a boat capsized off the coast of Mauritania.

Both African and European officials are keen to address the root causes of migration like poverty.

The EU has also been a strong supporter of the AU’s peace and security efforts.

Its African Peace Facility, a mechanism established in 2004, has allocated more than 2.7 billion euros for peace and security operations, targeting 14 African-led operations in 18 countries.

Yet European officials have signalled they want to shift away from providing stipends for troops in places such as Somalia, where the EU is a main backer of the regional peacekeeping force known as AMISOM.

The AU has struggled to get member states to impose a 0.2 percent levy on eligible imports so the body can provide more of its own financing — an initiative the EU supports.

So far just 17 African countries have followed through on that commitment. 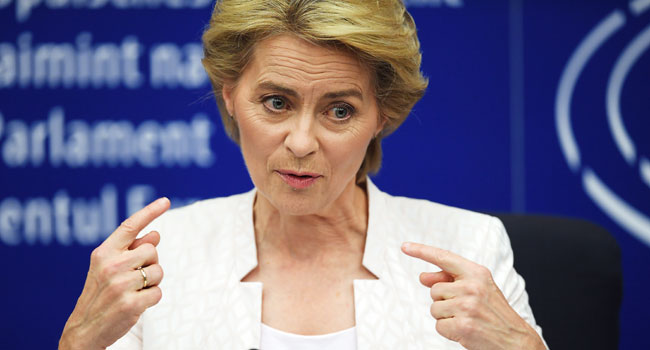 EU president-elect Ursula von der Leyen may have won a narrow majority in the European Parliament, but to lead the divided bloc she must build a stable support base.

The outgoing German defence minister will not take office until November, but she already faces a clamour of demands from the factions she will need to unite behind her.

Von der Leyen was nominated to become the first female president of the European Commission by the bloc’s 28 national leaders, but backed by only 383 MEPs, a 51 per cent majority.

A win, certainly, but far short of the 422 votes her predecessor Jean-Claude Juncker won five years ago, and a weak foundation from which to unite an increasingly fragmented Europe.

Worse, von der Leyen failed to unite the pro-integration centre-ground — Greens boycotted her, along with around a third of the centre-left and many mainstream conservatives.

The parliamentary vote was a secret ballot, but her majority appears to have included eurosceptic Poles, populist Italians and many British MEPs who are due to leave the chamber.

“It could hang over the whole parliamentary mandate. She needs to win over the Greens and the rest of the socialists,” said Letta, now president of the Institut Jacques Delors.

Von der Leyen addressed it in the immediate aftermath of her narrow victory, admitting that many in parliament had been annoyed to see her foisted on them by national leaders.

“There was a great deal of resentment, and I understand it,” she said, referring to the manner in which the parliamentary groups’ candidates for president were rejected.

But she continued: “I’m very pleased that after just two weeks — not even two weeks, 13 days — that we’ve been able to find a pro-European majority.

“It’s a good base to start from, I want to work constructively with this parliament. We need to find answers to overcome the divisions between east and west, north and south.”

In her immediate camp, aides were clear-eyed about the chances of expanding her support base. “It’s going to be difficult, the Greens are playing hard,” one told AFP.

Green group co-president MEP Philippe Lamberts confirmed this, demanding that no less than four members of the commission that von der Leyen will form must come from his party.

“I have reason to think she’ll come round to us, it’s an untenable situation, there’s no majority without the Greens,” he said. “If she wants to negotiate, we won’t be cheap.”

The team forming around von der Leyen knew the vote wold be close, but — aides said — they decided to forge ahead “by force” rather than entertain more demands for policy concessions.

On paper, the conservative EPP, socialist S&D and liberal Renew Europe groups could field a comfortable pro-European majority of 444 between them, but on the night many withheld their support.

Von der Leyen will next need their support in October when her team of 27 commissioners — one from each member state — is presented to the Strasbourg parliament for approval.

“If she can expand her majority, she’ll win,” a senior European diplomat told AFP.

But, as another senior envoy added: “If she doesn’t secure a stable majority in parliament, we’ll have a tough five years.”

Other observers are less pessimistic, arguing that resistance to von der Leyen’s appointment was mainly due to the way she was chosen and that once in the office her agenda would find support.

“A lot of the negatives had nothing to do with her personality or her programme,” said Eric Maurice of the Schuman Foundation.

“The election vote isn’t automatically indicative of how parliament is going to work.” 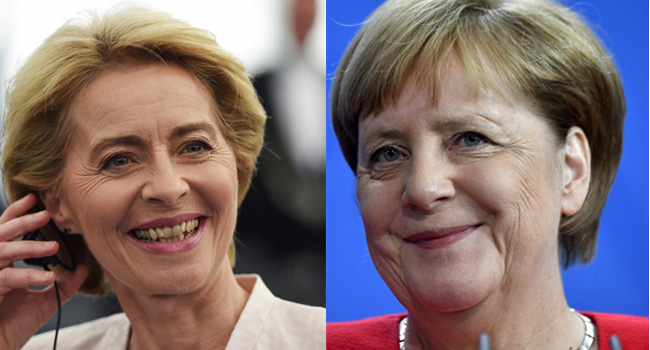 Chancellor Angela Merkel on Tuesday congratulated her outgoing defence minister Ursula von der Leyen for being elected the first woman and the first German in more than half a century to run the European Commission.

Merkel praised her long-time ally as a “committed and convincing European” who would “tackle with great vigour the challenges facing us as the European Union”.

“Even if I lose a long-standing minister today, I win a new partner in Brussels. I am therefore looking forward to good cooperation.”

German Foreign Minister Heiko Maas of the Social Democrats, reacting on Twitter, praised the fact von der Leyen had “promoted a united & strong EU, on which we now want to work together with her”.

“Time to look ahead, because the world is not waiting for Europe.”

Germany’s Ursula von der Leyen, freshly nominated to head the European Commission, is a loyal confidante of Chancellor Angela Merkel, most recently serving in the tough post of defence minister.

The political blue-blood, trained medical doctor and mother-of-seven was long considered a likely successor to Merkel but had seen her domestic political star fade in recent years.

Now the ambitious 60-year-old looks headed for Brussels after emerging as the surprise winner from weeks of European backroom deal-making and power plays.

Crucially, she has the backing of French President Emmanuel Macron, who appreciates her cooperation on Franco-German defence issues at a time of growing rifts between Berlin and Paris.

Brussels-born, fluent in French and English, and with a degree from the London School of Economics, she has cultivated a network of contacts in Europe and across the Atlantic.

A strong proponent of greater German engagement on the world stage and closer EU integration, she has in the past advocated a “United States of Europe”.

A life-long high achiever, Von der Leyen has perhaps drawn the most animosity for her best-in-class style, the persona of a super-mum with iron discipline and a perfect hairdo that some voters find unnerving.

– ‘The soloist’ –
Von der Leyen is the only Merkel cabinet member to have been there since the beginning in 2005, having run first the family affairs and then the labour ministry.

During her term, Germany has deployed troops in missions from Afghanistan to Mali while drawing frequent political fire from US President Donald Trump for what he considers Berlin’s insufficient military spending.

In the tough post, von der Leyen has weathered scandals over far-right extremists within the army, controversial contracts with business consultancies and cost over-runs, including for the renovation of a vintage naval vessel.

She was once dubbed “the soloist” for her go-it-alone style, and a recent poll by Bild am Sonntag newspaper rated her as the second-least popular member of Merkel’s cabinet.

– Political outsider –
She was born as Ursula Gertrud Albrecht on October 8, 1958 in Brussels, where her father Ernst Albrecht worked as a senior European Commission official, and lived there until age 13.

As the daughter of Albrecht, who went on to become CDU state premier of Lower Saxony, she spent her late teenage years under police protection at a time when leftwing extremists were targeting political and business figures.

The threat forced her to move to London to live in an uncle’s flat under the assumed name of “Rose Ladson”, and kept a security detail at her side well into adulthood.

A top-grade student, she studied first economics then medicine, going on to work in a women’s clinic.

She interrupted her career to be a housewife when her husband, a professor of medicine, won a scholarship to Stanford.

She joined the CDU at age 32 and entered the Lower Saxony parliament, going on to win her first Bundestag seat in 2009.

Von der Leyen has remained an outsider in the traditionally conservative and male-dominated CDU.

In a rare political gamble, she broke party ranks in 2013 to push for a women’s quota in corporate boardrooms.

She once advocated that police team up with internet service providers to block child pornography — a plan critics charged would create an online system of censorship, or “Zensur” in German, earning her the nickname “Zensursula”.

Like several other German politicians, she has faced accusations of plagiarism in her doctoral dissertation, but survived politically when no serious misconduct was found.