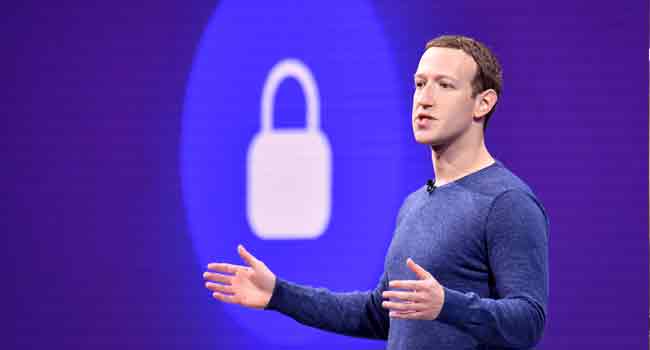 Facebook, under pressure to ramp up privacy rules across its platform, said on Tuesday it was rolling out a tool allowing users to control data that it receives from other apps and websites about their online activity.

The new tool is to give clients access to their so-called “off-Facebook activity” — fed back to Facebook with the aim of targeting advertisements — and give them the option of deleting it.

“Off-Facebook Activity lets you see a summary of the apps and websites that send us information about your activity, and clear this information from your account if you want to,” it said in a statement.

“This is another way to give people more transparency and control on Facebook,” it said.

Currently, commercial websites visited by a customer who also has a Facebook account may send Facebook details of that visit, prompting the social network to show that person ads related to any product they may have searched for.

They then have the option of disconnecting this information, or all future off-Facebook activity, from their account.

The new feature will be rolled out first in Ireland, South Korea and Spain, and then everywhere else over the coming months, Facebook said.

“We expect this could have some impact on our business, but we believe giving people control over their data is more important,” it said.

Last month, US regulators slapped Facebook with a record $5-billion fine for data protection violations in a wide-ranging settlement that calls for revamping privacy controls and oversight at the social network.

“We’ve agreed to pay a historic fine, but even more important, we’re going to make some major structural changes to how we build products and run this company,” Facebook’s CEO Mark Zuckerberg said at the time, adding that “we’re going to set a completely new standard for our industry,” he said.

Sri Lanka’s largest political party Saturday asked Facebook to protect the identity of its supporters, fearing a crackdown by what it called the “illegal” government.

The Indian Ocean nation has been in crisis since last month with two men claiming to be prime minister, MPs brawling in parliament and the administration paralysed.

It began on October 26 when President Maithripala Sirisena sacked Ranil Wickremesinghe as premier and replaced him with former strongman Mahinda Rajapakse.

In chaotic scenes in parliament this week, Rajapakse lost two votes of no confidence but he is refusing to go and Sirisena has yet to acknowledge the motions.

On Saturday Wickremesinghe’s United National Party (UNP) wrote to Facebook chief Mark Zuckerberg asking the US firm not to cooperate with Rajapakse’s administration.

“We urge Facebook to refrain from disclosing information about… users of the platform to any officials of the illegal government unless it is properly sanctioned by a court of law,” the UNP said.

The UNP had also complained that its official page was blocked by Facebook on Thursday ahead of a mass rally it organised to express solidarity with Wickremesinghe, who insists he is still prime minister.

Sirisena ordered a ban on Facebook across Sri Lanka in March after blaming it for spreading hate speech and fuelling intercommunal violence that led to the deaths of three people and destruction of property.

Since then, Facebook had said it was deploying more staff to identify and remove inflammatory material from Sri Lankan users.

This week Sri Lankans had to rely on social media to watch their lawmakers fighting and throwing chilli powder after the main telecommunications company stopped its live broadcast.

Mozilla has decided to end support for Apple’s OS X 10.5 or Leopard, the developers of the company said.

According to PCWorld, the move was necessary as the builds will fail to run on anything less than Mac OS X 10.6.with the advent of Firefox 16 in October.

This decision had already been since last month when Josh Aas one of the Firefox platform group said on Bugzilla.

By Mozilla’s release calendar, Firefox 16 is to debut Oct. 9. Firefox 17, the first that will not be pushed to Leopard users, is slated for a Nov. 20 launch.

Although Mozilla talked about ditching OS X 10.5 support in December 2011, it decided then to keep Apple’s OS on the list. Discussions among engineers, managers and contributors restarted in late June.

Like Google, another reason Mozilla cited for dumping Leopard was that Apple has also ended support.

The last time Apple patched bugs in Leopard was November 2011, and its most recent security update, in May 2012, disabled older copies of Flash Player to stymie Flashback rather than fix specific security flaws. Nor has Apple maintained Safari on OS X 10.5. The final update was issued over a year ago.

One project that Mozilla has been pushing is a browser compatible with Windows 8, Microsoft’s new operating system.

In a blog post last week, Brian Bondy, a Firefox platform engineer who has been working on a “Metro” version for Windows 8, said that the browser has “progressed steadily,” adding that Mozilla’s goal is to ship a preview by the end of next month.

Windows 8, which is available, now to some Microsoft customers, hits retail on Oct. 26.

Mozilla was the first Microsoft rival to announce it would create a combination desktop and Metro-style browser to compete with Internet Explorer 10 (IE10) on Windows 8.

Google later joined the race, and in June beat Mozilla to the preview punch by releasing an in-progress browser that runs in the Metro user interface (UI).