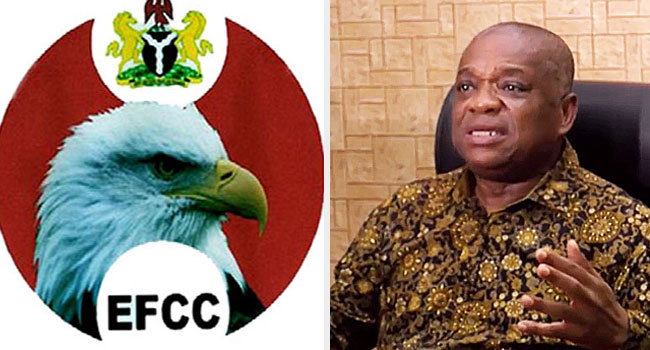 The Economic and Financial Crimes Commission (EFCC) will on Tuesday, arraign a former governor of Abia State and Chief Whip of the Senate, Orji Uzor Kalu, before the Federal High Court in Abuja, the nation’s capital.

The ex-governor will be arraigned before Justice Inyang Ekwo on money laundering related charges.

Senator Kalu, who governed Abia State from 1999 to 2007, was earlier found guilty and handed a 12-year jail term by the Lagos division of the court.

The trial court convicted him alongside his firm, Slok Nigeria Limited, and a former director of finance in Abia State, Jones Udeogu, for allegedly diverting about N7.1billion from the state treasury to personal use.

However, in a unanimous judgment by a seven-man panel of the Supreme Court, delivered on May 8th, 2020, the Apex Court nullified the entire proceedings that led to Senator Kalu’s conviction, stressing that the trial judge, Justice Mohammed Idris, was already elevated to the court of appeal, as at the time he sat and delivered judgement against the defendants.

It noted that Justice Idris was no longer a judge of the Federal High Court as of December 5, 2019, the day the former governor and his co-defendants were found guilty of the money laundering charge against them.

The apex court ordered a retrial of the defendants.

The Economic and Financial Crimes Commission (EFCC) has reacted to the judgment of the Supreme Court which nullified the conviction of former Abia State Governor, Orji Uzor Kalu.

In a statement on Friday by its Head of Media and Publicity, Dele Oyewale, the anti-graft agency noted that the apex court did not acquit the former governor of the charges against him.

Earlier, a seven-man panel of the apex court led by Justice Olabode Rhodes-Vivour nullified the conviction of Senator Kalu and Ude Udeogu, a former Director of Finance and Account at the Abia State Government House.

Justice Ejembi Eko, who delivered the lead judgment, held that the Federal High Court in Lagos which tried and convicted the former governor and his aide, as well as his firm – Slok Nigeria Limited, acted without jurisdiction.

He noted that Justice Mohammed Idris who sentenced them was already a Justice of the Court of Appeal, as at that time.

The Supreme Court Justice added that a Justice of the Court of Appeal cannot operate as a judge of the Federal High Court.

According to him, the 1999 Constitution does not permit a judge elevated to a higher court to return to a lower court to conclude a trial he began.

In its reaction, the EFFC described the judgment of the apex court as ‘a technical ambush’ against Kalu’s trial.

It, however, stressed that it was prepared for another trial of the case as its evidences against the former governor and his co-defendants were overwhelming.

Read the statement from the anti-graft agency below:

The attention of the Economic and Financial Crimes Commission (EFCC) has been drawn to the judgment of the Supreme Court nullifying the trial of a former governor of Abia State, Orji Kalu, his firm, Slok Nigeria Limited and Jones Udeogu, a former Director of Finance and Account of Abia State Government and ordering their fresh trial at the lower court.

The apex court based its verdict on the grounds that Justice Mohammed Idris, who convicted Kalu and others had been elevated to the Court of Appeal before the judgment and returned to the lower court to deliver the judgment which it considered as illegal.

The EFCC considers the judgment of the apex court as quite unfortunate. It is a technical ambush against the trial of the former governor.

The Commission is prepared for a fresh and immediate trial of the case because its evidences against Kalu and others are overwhelming.

The corruption charges against Kalu still subsist because the Supreme Court did not acquit him of them.

The entire prosecutorial machinery of the EFCC would be launched in a fresh trial where justice is bound to be served in due course.