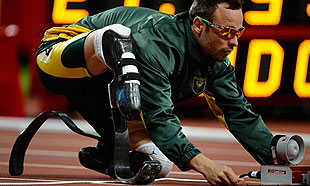 A South African judge on Tuesday postponed until August 19 the murder trial of global athletics star Oscar Pistorius, who has been charged with shooting dead his girlfriend on Valentine’s Day.

Pistorius, 26, had to make his way through a scrum of photographers and reporters as he made his first formal public appearance since his release on bail in February.

The double amputee athlete, nicknamed “Blade Runner” for the prosthetics he uses in competition, has admitted shooting Reeva Steenkamp, 29, four times through a locked bathroom door on February 14 at his home in an affluent Pretoria community.

In pre-trial testimony, his lawyers told the court the shooting was a tragic mistake and Pistorius was acting in self-defense against what he thought was an intruder.

Prosecutors accuse him of premeditated murder for firing into the door, hitting Steenkamp in the head, hip and arm.

The judge postponed the case after the athlete’s lawyers asked for more time to prepare.

Pistorius was one of the stars of the 2012 Olympics and Paralympics in London, carrying South Africa’s flag at the closing ceremonies for the Games.

His arrest and subsequent murder charge shocked millions around the world as he was seen as a symbol of triumph over adversity.

In South Africa, he was a hero for both black and white people, transcending the racial divides that persist 19 years after the end of apartheid.

Pistorius has mostly kept out of the public eye since he secured bail. Media reported that in April he partied at a nightclub in a Johannesburg suburb after his bail conditions were relaxed the previous month.

The Pistorius camp said the matter was blown out of proportion and he went out for a quiet dinner with friends after spending weeks in the house with family.

South Africa does not have trial by jury so pre-trial media coverage is seldom deemed to be prejudicial.