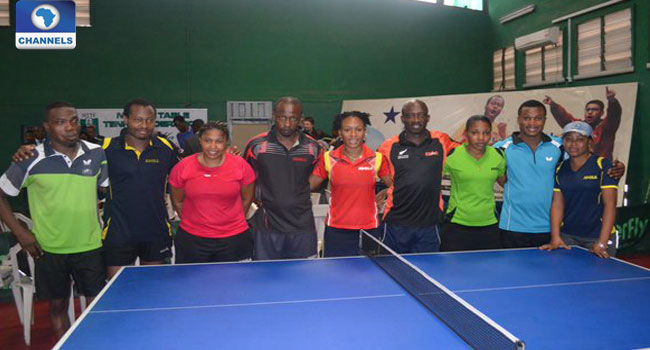 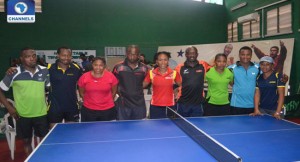 Nigeria will battle for the knockout stage against highly-rated India team led by veteran Sharath Achanta. He had an encounter with Aruna Quadri at the 2015 World Championship in China, Soumyajit Ghosh.

Just like their male counterparts, Nigeria’s women also have a difficult task, as they have been pitched against India as well in Group G. Other teams in the group are Croatia, Puerto Rico, Colombia and Portugal.

The battle for promotion to the elite division for Nigeria will commence on February 28, as the matches will be played in a round robin format with the two top teams progressing to the knockout stage.

Meanwhile, European champions, will not go through a tough journey to win more medals, as they compete against world champion, China in Group A of the Championship division.

In Kuala Lumpur Austria and Greece will meet again in what might be considered one of the most difficult groups from which to gain a top three place to keep medal hopes alive.

Also in the group is Chinese Taipei, who was the bronze medallist two years ago, after winning two of the dramatic three matches to Korean opposition, who are seeded forth.

It was an engagement in which Chuang Chih-Yuan saved match points against Joo Saehyuk the fourth contest of the fixture to set the scene for Chien Chen-An to secure victory at the expense of Jung Youngsik.

The Czech Republic and DPR Korea complete the group.

Likewise, Group C in the Men’s Championship Division lists four teams who reached the main draw in 2014; Japan, the third seeds, appears alongside Portugal, Poland and Singapore. Belarus and Ukraine complete the line-up.

Notably, at the 2014 World Team Championships, with the established trio of Tiago Apolonia, Marcos Freitas and João Monteiro on duty, a three-one win was recorded against the Polish formation of Wang Zengyi, Daniel Gorak and Robert Floras; the win coming prior to a three-nil defeat against the Japanese outfit formed by Jun Mizutani, Koki Niwa and Kenta Matsudaira. Belarus and Ukraine are the two remaining outfits in the group.

Testing times ahead for Japan; it is the same for all in Kuala Lumpur. Germany, the second seeds in the Men’s Championship Division and Korea Republic, the fourth seeds, each face just one adversary that gained a top 12 place in Tokyo.

Sweden is the team in question for Germany; for Korea Republic, it is Croatia.

Alongside Germany in Group B, France, Denmark, England and Malaysia comprise the six outfits; for Korea Republic in Group D, it is Hong Kong, Russia, Romania and Italy. The top four in the Championship Division of the Men’s Team event is the same as two years ago in Tokyo.

One step further, a medal, is very much the goal for the Netherlands but in Group C, they face Singapore, Ukraine and Belarus; all teams, who reached the main draw in Tokyo. Poland and France complete the group.

Testing times await the Netherlands; arguably for the host nation it is even more testing.

Malaysia is drawn in Group A alongside China, the defending champions and top seeds; Chinese Taipei, Romania, Hungary and Spain completes the group. 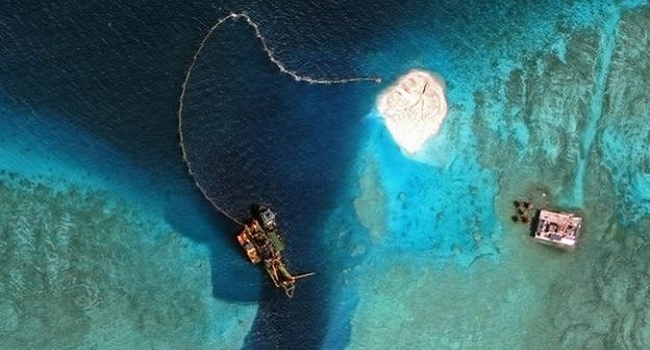 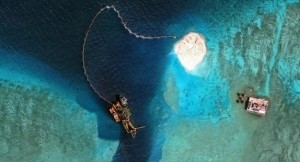 Vietnam has described the landing of a Chinese plane on an artificial island it has built in a contested part of the South China sea, as a violation of its sovereignty.

The Vietnamese Foreign Ministry said the airfield was built illegally on a part of the Spratly archipelago that lies within its territory.

China insisted it has complete sovereignty over fiery cross reef and had used a civilian plane to test the airstrip.

Several nations disputed China’s territorial claims in the area, resulting in overlapping claims with Vietnam and the Philippines.

They accused China of illegally reclaiming land in contested areas to create artificial islands with facilities that could potentially be for military use.

“China has indisputable sovereignty over the Nansha Islands and their adjacent waters. China will not accept the unfounded accusation from the Vietnamese side,” she said, referring to the Spratly Islands by their Chinese name.

It called the flight “a serious infringement of the sovereignty of Vietnam on the Spratly archipelago”. 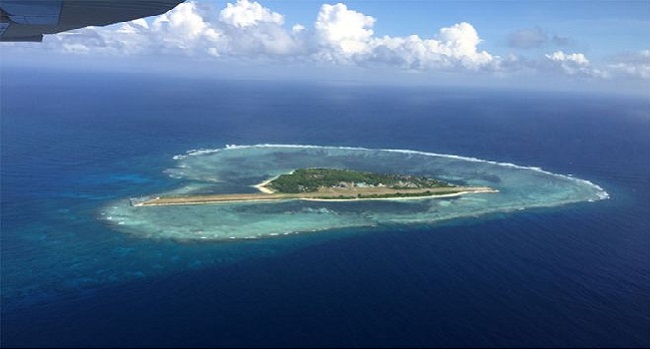 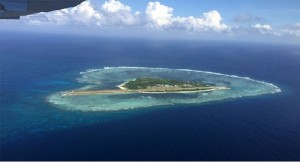 The dispute over the South China sea is intensifying as reports say protesters have landed on a remote Philippine island in the disputed area.

About 50 Filipinos, mostly students, reached Pagasa in the Sprat archipelago on Saturday, saying they planned to stay for three days.

They said they want to highlight growing Chinese encroachment in a Philippine exclusive economic zone. The group is expected to leave on Monday.

China, which claimed almost all the South China sea, is believed to be rich in resources, dismissing rival claims by neighbours.

Apart from the Philippines, Brunei, Malaysia, Taiwan and Vietnam all lay claim to the disputed waters.

The Philippines has a case challenging Beijing before the arbitration court in the Hague. It says the “nine-dash line”, which China uses to demarcate its territorial claims, is unlawful under the UN Convention on the Law of the Sea, which both countries have signed.

China has boycotted the proceedings, insisting that the panel has no authority to rule in the case. 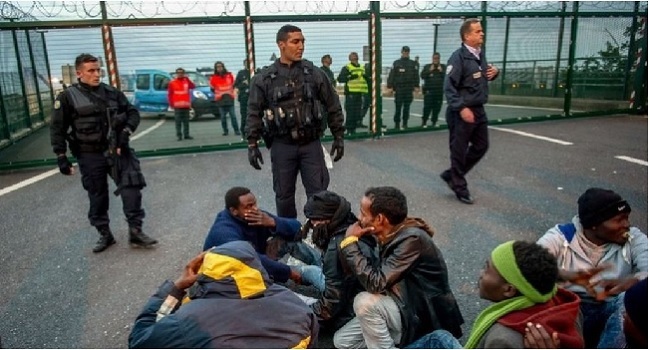 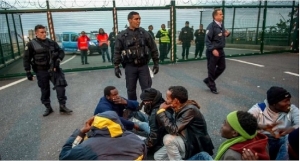 British Prime Minister, David Cameron, has given a strong warning to migrants in Calais, saying Britain will not become a “safe haven” for them.

The statement was made after hundreds of desperate migrants continued their attempts to reach the UK.

The Prime Minister said that the UK was doing all it can, to make Britain’s borders secure.

Mr Cameron made the comments after people gathered for a third night at the fencing at the channel tunnel freight terminal.

More than 3,500 people have tried to get into the tunnel terminal this week.

Several hundred migrants were escorted away from the terminal by French police on Wednesday night; the third night of large-scale attempts to storm the terminal.

As night fell, the road towards the Channel Tunnel  came alive. Groups of 10 or 12 migrants, moving steadily along the darkened highway, jackets pulled close, hoods up.

After a day of discussion in Paris and in London over how to secure the tunnel entrance and fresh deployments of riot police, the determination of Calais’ migrants seems unchanged.

The fresh attempts came, despite the death of a man, believed to be a Sudanese national and aged between 25 and 30, on Tuesday. He is thought to have been crushed by a lorry.

Nine people had been killed attempting to cross the channel in the past month.

Speaking in Vietnam during his tour of South East Asia, Mr Cameron said that the French had sent an extra 120 police to Calais and the UK was investing in fencing and security measures at the channel crossings in both Calais and Coquelles.

“Everything that can be done will be done to make sure our borders are secure and make sure that British holidaymakers are able to go on their holidays.”

The Prime Minister acknowledged the situation was “very testing” because there was a “swarm of people coming across the Mediterranean, seeking a better life”.

“But we need to protect our borders by working hand in glove with our neighbours, the French and that is exactly what we are doing,” he said. 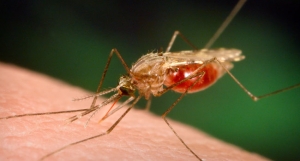 A new threat to global health may have been detected with the discovery of a drug resistant strain of malaria.

One of the researchers from Mahidol Oxford Tropical Medicine Research Unit in Thailand said that the drug-resistant malaria was found at the Myanmar-India border, and now poses an enormous threat.

The ability of the malaria parasite to shut off the effects of Artemisinin has been spreading since it emerged in south east Asia.

Deaths from malaria have nearly been halved since year 2000, and the infection now kill about 584 thousand people each year.

The malaria type has been detected in Cambodia, Laos, Thailand, Vietnam, Myanmar, also known as Burma, but not in Africa. 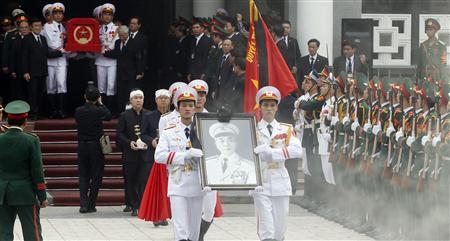 Vietnamese poured into the capital on Sunday to bid farewell to Vo Nguyen Giap, the general who masterminded historic defeats of France and the United States to become one of the 20th century’s most important military commanders.

Crowds lined the streets of Hanoi cheering, crying and holding aloft pictures of “Red Napoleon”, a national legend with a domestic standing second only to the leader of Vietnam’s struggle against colonialism, Ho Chi Minh.

Giap died on October 4, age 102, after four years in a Hanoi military hospital.

Short, slightly built and a man of no formal military training, Giap was ranked by historians among giants such as Montgomery, Rommel and MacArthur for victories over vastly better equipped armies that ushered in the end of foreign intervention and cemented communist rule in Vietnam.

“He was the general of the people, always in the people’s hearts and in history,” said Nguyen Phu Trong, general secretary of the ruling party that Giap’s forces brought to power in 1975 after driving the United States out of what was then a democratic South Vietnam.

“This is a big loss,” Trong said in a speech at his state funeral, broadcast live on national television.

Hundreds of thousands thronged to catch a glimpse of Giap’s coffin as it was driven on a military vehicle past an unbroken line of mourners to an airport 30 km (18 miles) away. Giap’s body will be flown to his home province of Quang Binh for burial.

The funeral has brought a show of unity that Vietnam’s current generation of leaders have struggled to foster in a country where three quarters of the 90 million population were born long after Giap’s battlefield victories.

Though the Vietnam that Giap helped to liberate from Western control has seen unprecedented development and stability, discontent simmers over land ownership laws, entrenched graft and an economy growing at its slowest pace in 13 years.

“I never heard guns or bombs but I know our history,” said Dao Huy Hoang a 21-year-old Hanoi student.

“After Uncle Ho and General Giap, it would be hard to find anyone like them, who dedicate their lives to the country without thinking of their personal interest.”

Television and radio played somber music during the two-day funeral as people queued for hours to view the flag-draped coffin of the man they call the “big brother” of the nation.

Giap’s critics spoke of his ruthless tactics and willingness to sustain heavy losses in pursuit of victory, his most notable, the humiliation of the French at Dien Bien Phu in 1954, which heralded the end of colonialism worldwide.

His textbooks on guerrilla warfare inspired revolutionaries and insurgents the world over. He once said any army fighting for freedom “had the creative energy to achieve things its adversary can never expect or imagine”.

In the decade leading to his death, Giap started to mellow. His post-war political role was short-lived and he was dropped by the all-powerful politburo in 1982 before taking roles as head of committees overseeing science and family planning.

In a 2004 interview with Reuters, Giap recalled signing a book while on a trip to the United Nations in Geneva with the words “Vo Nguyen Giap, General of Peace”.

In a moving speech, Giap’s eldest son, Vo Dien Bien said the motivation of his father and the troops who served under him was to build a peaceful, unified Vietnam.

“In his death, his spirit will combine with the spirit of tens of millions of Vietnamese to become one harmonized power for a strong and wealthy Vietnam,” Bien said.

Those who travelled to see Giap’s coffin expressed their thanks to him for winning independence. Among them was To Xuan Thanh, a 60-year-old dressed in his old army uniform, who rode a motorcycle for 200 km (125 miles) to Hanoi.

“The general’s words and actions remain bright for all the veterans, not only in the war but in peace time,” he said.