As many as 20 Vietnamese citizens are feared among 39 people found dead in a truck in Britain this week, families and community organisers said Saturday, as one of the alleged truck owners denied involvement in the tragedy.

British police initially said all of the 31 men and eight women found early Wednesday in a refrigerated lorry in an industrial park in Grays, east of London, were believed to be Chinese nationals.

Four people have been held over the incident, which has shocked Britain and shed light on dangerous trafficking routes into Europe taken by undocumented migrants.

Several Vietnamese families now fear their relatives, who may have been carrying falsified Chinese passports, are among the victims.

Britain-based community group VietHome said it had received “photos of nearly 20 people reported missing, age 15-45” from Vietnam, a popular source for smuggled migrants looking to better their lives in the UK.

Nguyen Dinh Gia told AFP Saturday he got a call from his son two weeks ago saying he was planning to go to Britain where he hoped to work in a nail salon.

But Gia received a call several days ago from a Vietnamese man saying “Please have some sympathy, something unexpected happened,” he recounted to AFP.

“I fell to the ground when I heard that,” Gia said. “It seemed that he was in the truck with the accident, all of them dead,” he added.

A 26-year-old Vietnamese woman Pham Thi Tra My is also believed to be among the victims after her family received a text message from her hours before the migrants were discovered.

“I’m sorry Mom. My path to abroad doesn’t succeed. Mom, I love you so much! I’m dying because I can’t breathe,” she said in the message confirmed by her brother Pham Manh Cuong.

He received another message from her a few hours later saying: “Please try to work hard to pay the debt for mummy, my dear,” according to a text sent at 4:28 am Vietnam time on Wednesday (2128 Tuesday GMT) seen by AFP.

The family, who live in a bare home with a corrugated tin roof in central Vietnam, have asked Vietnamese officials to help find the missing woman.

The truck carrying the migrants arrived in Purfleet on the River Thames estuary on a ferry from the Belgian port of Zeebrugge just over an hour before ambulance crews called the police at 1:40 am.

The driver, a 25-year-old man from Northern Ireland, was arrested at the scene.

A married couple were held in Warrington in northwest England on Friday, including a woman who allegedly once owned the truck that carried the container, according to media reports.

The pair denied any involvement and said the truck had been sold to an Irish company more than a year ago.

“It’s nothing to do with us now,” said one of the accused, Joanna Maher, as quoted by The Times.

A fourth suspect, a 48-year-old man from Northern Ireland, has also been arrested.

Investigators started carrying out autopsies Friday to establish how the victims died before the work begins on trying to identify them.

The police investigation is Britain’s largest murder probe since the 2005 London suicide bombings.

The suspected Vietnamese victims both come from Ha Tinh, an impoverished province in a part of Vietnam where many of the country’s illegal migrants come from.

Many have their sights set on Britain, where they end up working in nail salons or on cannabis farms, hoping for quick riches.

They can pay smugglers up to $40,000 for the dangerous journey across eastern Europe — often via China or Russia — an enormous sum in Vietnam where the annual per capital income is around $2,400, according to the World Bank.

Those who cannot pay upfront often have to work off their debt to traffickers, which may include a fee for falsified documents.

The Vietnamese embassy in London is working to “accelerate the process of confirming the victims’ identities”, according to a statement from the foreign ministry in Hanoi. 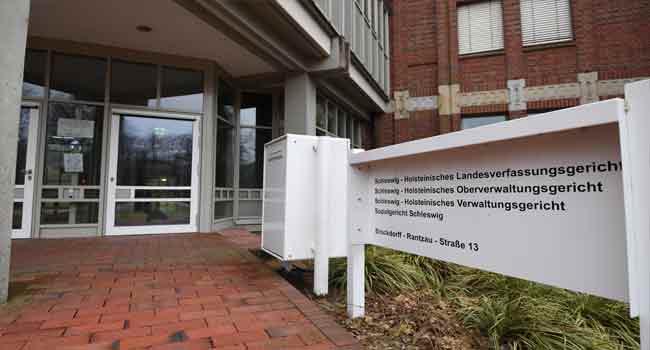 A German court on Wednesday sentenced a Vietnamese man to nearly four years in jail for taking part in a brazen Cold War-style kidnapping ordered by Hanoi of an oil executive from a Berlin park.

Judges at the Berlin court said the 47-year-old Czech-Vietnamese national, identified as Long N.H., was guilty of aiding an abduction and working for a foreign intelligence service.

But they handed him a relatively mild sentence of three years and ten months after he confessed to his involvement.

“The accused knew of the plans of the Vietnamese secret service but did not belong to the top level of command,” judges said in their verdict, according to DPA news agency.

Long N.H. admitted during his trial that he rented the vehicle used in last July’s abduction of fugitive Vietnamese state company official Trinh Xuan Thanh, who was spirited back to Hanoi.

Thanh — also a Communist party functionary who was seeking political asylum in Germany — has since been sentenced to two life terms in Vietnam on corruption charges.

The 52-year-old and his companion were walking in Berlin’s Tiergarten park when they were dragged into a van in broad daylight and smuggled back to Vietnam.

The German government was outraged, calling it a “scandalous violation” of its sovereignty.

Thanh’s German lawyer, Petra Schlagenhauf, has described the kidnapping as “like a story from the Cold War”.

Long N.H., was once among thousands of so-called guest workers in communist East Germany. He was later denied asylum and resettled in Prague.

He was arrested there last August and extradited to Germany days later.

He admitted renting the van used in the abduction in Prague and driving it to Berlin, but he was not at the wheel during the kidnapping. He then drove the van back to Prague.

It remains unclear exactly how Thanh was transported back to his home country, but investigators believe he was driven to the Slovakian capital Bratislava and then flown to Hanoi.

German media have reported that a Slovakian government plane lent to a visiting Vietnamese delegation at the time was involved in the transfer.

Slovakia has said it noticed nothing suspicious about the delegation or their flights but warned Hanoi of harsh consequences if the allegations proved true. 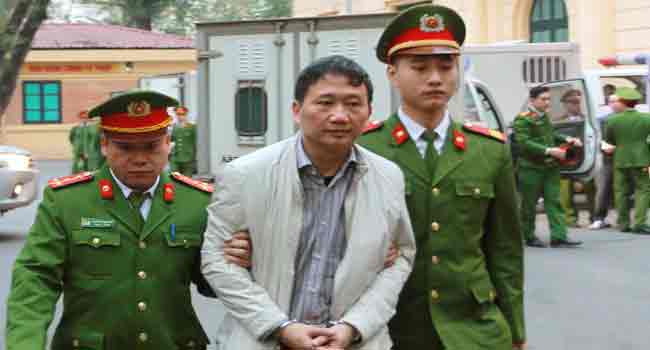 A Vietnamese former state oil executive who was allegedly kidnapped from Germany was jailed for life on Monday for embezzlement, in the highest-profile corruption trial to target the communist country’s business and political elite.

The case — also involving 21 other officials, including a former party politburo member — has captivated a country where the affairs of the powerful are normally kept secret and the downfall of senior politicians rarely happens in public.

Vietnam has mirrored China in its massive corruption purge, but critics say the campaign is as much about targeting political foes as it is about tackling graft in one of Southeast Asia’s most corrupt nations.

The life sentence for Trinh Xuan Thanh, the former head of PetroVietnam Construction (PVC), capped a dramatic two-week trial — closed to international media — that included a tearful apology from the 51-year-old.

Thanh was sentenced to “14 years for mismanagement and life in prison for embezzlement”, according to state-run VNExpress news site.

The jury said “no one at PVC dared use money for wrong purposes” without Thanh’s direction, according to VNExpress.

The embezzlement charges carry a maximum sentence of death but prosecutors recommended life instead.

He faces a separate trial for embezzlement Wednesday that could see him put to death.

Former politburo member Dinh La Thang, who once chaired the board of PetroVietnam, was sentenced to 13 years in prison, while the remaining defendants got punishments ranging between 22 years in jail and a 30-month suspended sentence.

Public opinion on the prison terms remained divided on social media Monday, though some were swift to decry the sentences as too light.

“These were sentences for street thieves,” wrote Facebook user Huan Pham after the verdict was announced.

Thanh’s case has gripped the Vietnamese public since he fled to Germany in 2016 after being spotted driving an expensive Lexus with government licence plates, prompting rumours the state could try to bring corruption charges against him.

He was next heard of in August 2017 when German officials said he was plucked from a central Berlin park by Vietnamese security agents, in a Cold-War style episode which Germany described as a “scandalous violation” of its sovereignty.

Hanoi has denied he was kidnapped, insisting he returned voluntarily to Vietnam where he appeared on state television allegedly confessing to his crimes.

He will return to court for a fresh trial on Wednesday on embezzlement charges after he was accused of pocketing $620,000 of state funds.

The charges carry the death penalty.

The trial was the highest-profile corruption case in the one-party state, which has long vowed to tackle graft but rarely targets senior officials.

According to Transparency International, Vietnam ranks 113th out of 176 on its corruption perception index, worse than its Southeast Asian neighbours Thailand, the Philippines and Myanmar.

Scores of bankers, former officials and businessmen have been jailed as part of Vietnam’s purge, including a senior banker sentenced to death for fraud last year.

Critics say the corruption purge is fuelled by political infighting and is led by Communist Party chief Nguyen Phu Trong, characterised as a conservative hardliner.

London said Thanh’s conviction may be the “most spectacular” but he expects the anti-graft drive to continue.