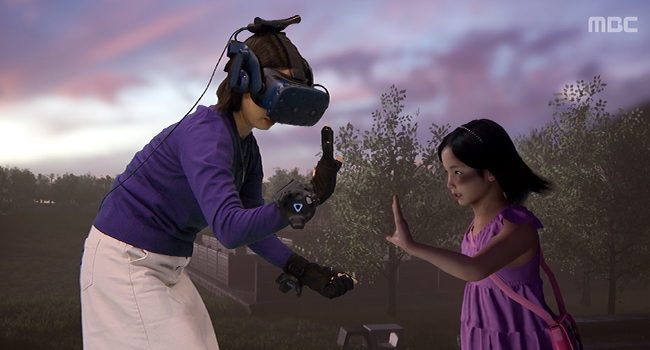 A tearful reunion between a mother and her dead daughter via advanced virtual reality for a South Korean television has become an online hit, triggering fierce debate about voyeurism and exploitation.

The footage began with the girl — who died of leukaemia in 2016 — emerging from behind a pile of wood in a park, as if playing hide-and-seek.

Tears streaming down her face, Jang Ji-sung reached out towards her, wracked with emotion.

“I have missed you Na-yeon,” she told the computer-generated six-year-old, her hands moving to stroke her hair.

But in the real world, Jang was standing in front of a studio green screen, wearing a virtual reality headset and touch-sensitive gloves, her daughter’s ashes in a locket around her neck.

At times the camera cut to Jang’s watching husband and their three surviving children, wiping away tears of their own.

A nine-minute clip of the Munhwa Broadcasting Corporation (MBC) documentary “I met you” has been watched more than 13 million times in a week on Youtube.

Many viewers offered Jang their sympathy and support for the concept.

“My mother unexpectedly passed away two years ago and I wish I could meet her through virtual reality,” said one.

“It’s understandable a grief-stricken mother would wish to meet her late daughter. I would do the same,” he told AFP.

“The problem lies in that the broadcaster has taken advantage of a vulnerable mother who lost a child for sake of the viewer ratings.”

“If the mother had been counselled before the filming,” he added, “I wonder what kind of a psychiatrist would approve this.”

It took eight months of filming and programming to create the virtual Na-yeon, but the makers of the documentary insisted the broadcast was intended to “console the family” rather than promote virtual reality in ultra-wired South Korea.

The technology presented a “new way to keep loved ones in memory”, one of the producers told reporters.

Jang herself — who has her daughter’s name and date of birth tattooed on her arm in memory — hoped the programme could “console” others who had lost loved ones.

“Even though it was a very brief… I was really happy in the moment,” she wrote on her blog — which she has since turned private.

During the broadcast the two sat at a table to celebrate Na-yeon’s missing birthdays, singing “happy birthday” together.

Before blowing out the candles, Na-yeon made a birthday wish: “I want my mother to stop crying.” 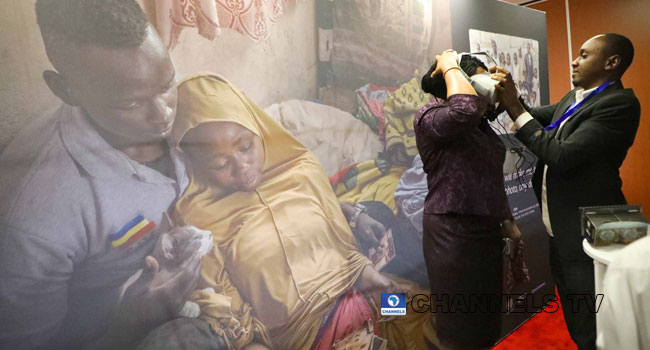 The United Nations on Wednesday launched a virtual reality experience called ‘Holding On’ to tell the stories of those who have been displaced by the Boko Haram insurgency which is now in its 10th year.

The exhibition which is open to the public is billed to last from August 1 to 15, 2019, and is also in commemoration of the World Humanitarian Day which comes up on August 19.

Attendees get to watch 360 videos that would give them a feel of the deplorable conditions that the internally displaced persons face in Nigeria.

Speaking at the event, the Governor of Yobe State, Mai Mala Buini, called for more assistance as the states in the northeast begin the process of reconstruction as well as rehabilitation of over 1.8 million persons displaced by the Book Haram insurgency. 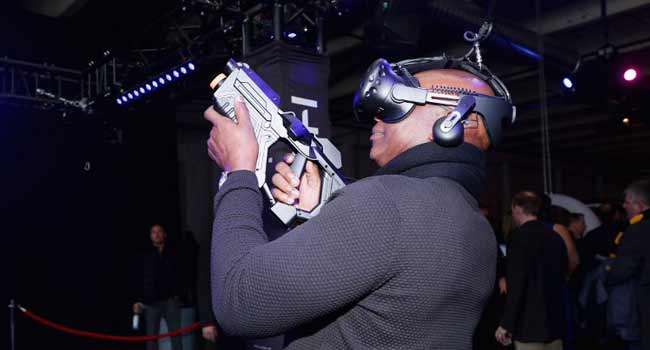 More research is needed to confirm the long-term benefits of such technology, which gave the impression of being in an alternate reality populated by life-like avatars.

Up to 90 per cent of people with psychosis suffer from paranoid thoughts, leading them to perceive threats where there are none.

As a result, many psychotics avoid public places and contact with people, spending a lot of time alone.

Researchers led by Roos Pot-Kolder of VU University in the Netherlands extended this method into a virtual environment.

For the trial, the 116 participants – all receiving standard treatment, including antipsychotic medication and regular psychiatric consultations — were divided into two groups of 58.

Only one group practised social interactions in a virtual environment.

The treatment consisted of 16 one-hour sessions over 8-12 weeks in which the participants were exposed, via avatars, to social cues that triggered fear and paranoia in four virtual settings: a street, a bus, a café and a supermarket.

Therapists could alter the number of avatars, their appearance, and whether pre-recorded responses to the patient were neutral or hostile.

The therapists also coached participants, helping them to explore and challenge their own feelings in different situations, and to resist common “safety behaviours” such as avoiding eye contact.

Participants were assessed at the start of the trial, as well as three and six months afterwards.

Exposure to virtual reality did not increase the time participants subsequently spent with other people, the study found.

But it did affect the quality of their interactions.

The virtual reality CBT group – which showed no adverse effects – went on to use fewer “safety behaviours”.

“With the development of virtual reality and mobile technology, the range of tools available in psychotherapy is expanding,” Kristiina Kompus of Bergen University said in a comment also carried by the journal.