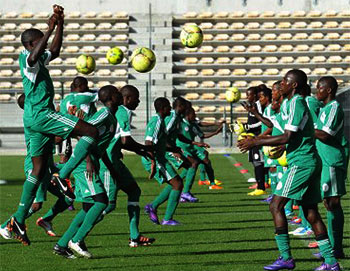 In their last preparation match ahead of their African Youth Championship (AYC) quest in Algeria, Nigeria’s U-20 Flying Eagles drew 2-2 yesterday with Club Africain in Tunis.

Billed to leave for Algeria after the game against Club Africain, the injection of Olanrewaju Kayode gave the squad the first goal after 34 minutes from inside the six-yard box after a fantastic play and Club Africain replied with an equaliser a minute later.

Aliyu Goyi a left back player almost put the Flying Eagles ahead again in the 52nd minute with his stunning move, but his low shot was close to target.

Club Africain however took the lead after Goyi’s narrow miss with a penalty kick which the Flying Eagles conceded after a foul inside the box.

The first team side of the Club Africain as opposed to Nigeria’s U-20 side bowed to pressure from the junior boys in the 70th minute after Kayode’s superb chance could not be knocked off by Afrcain’s goalkeeper as he rounded him up and claimed the goal for Flying Eagles.

Flying Eagles proved a better side but couldn’t go further by showing it on the score sheet as they were denied several scintillating chances.

The Flying Eagles will fly out to Algiers on Wednesday afternoon, while their opening Group B match will be on Sunday, March 17 against Mali.