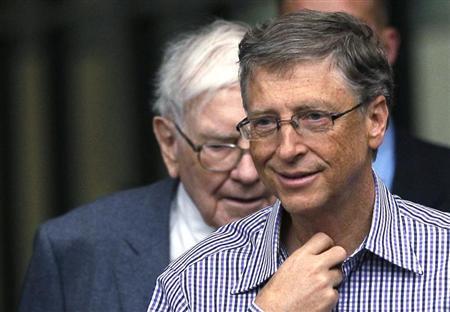 Nine more wealthy families and individuals have pledged to give at least half of their fortunes to charity as part of a philanthropic campaign by two of the world’s richest men, Warren Buffett and Bill Gates.

The Giving Pledge, which was launched by Gates, the co-founder of Microsoft, and investor Buffett in 2010, said on Tuesday that billionaires joining the campaign included New York-based real estate magnate Stephen Ross.

The announcement came just a few days after Florida lawmakers shot down a bid by Ross’s Miami Dolphins NFL team to win tax dollars to help finance a $350 million upgrade of the Sun Life stadium outside Miami.

In addition to Ross, the new group of billionaires taking the pledge included hedge fund manager Paul E. Singer, the founder and president of Elliott Management Corp, and Sara Blakely, the founder of shapewear brand SPANX.

Entrepreneur Craig McCaw, who built McCaw Cellular into the largest U.S. cellular company, is also among new signatories together with his wife, Susan, as is Britain’s Lord Ashcroft.

The Giving Pledge does not accept money or tell people how to donate but asks billionaires to make a moral commitment to give their fortunes to charity during their lifetime or after death.

The Giving Pledge now has 114 signatories. The full list of billionaires, and personal letters from many outlining their charitable commitment, can be seen at www.thegivingpledge.org.