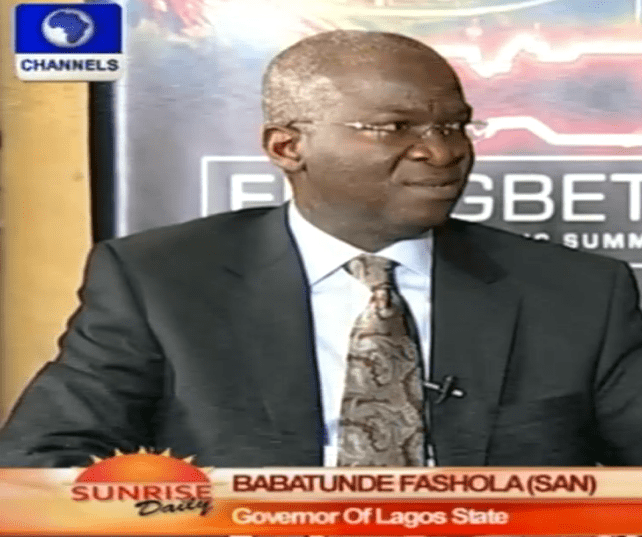 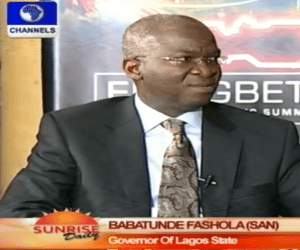 The Governor of Lagos State, Babatunde Fashola, has said that the essence of the Lagos Economic Summit, tagged Ehingbeti 2014 was for the private sector to draw the attention of the Government to places where its activities would enable the private sector achieve its potential in terms of delivering of service, provision of opportunities and growth of the economy.

Speaking on Channels Television breakfast programme, Sunrise Daily, Governor Fashola said that the summit which holds bi-annually was to check the progress of the resolutions carried out in the previous summit and how they had been implemented.

In an effort to further emphasize its mission to encourage more private sector involvement in the development of Lagos State, Governor Fashola spoke about different areas of the state’s economy, providing insight into his administration’s efforts at creating a conducive environment for investment.

Power generation came to the fore, being the focus of Ehingbeti 2014. He stated that the distribution and generation of power were now in the hands of the private sector, which makes it easier for people that have investments in the sector.

Governor Fashola disclosed that for about 4 years, Government had invested in a transformer manufacturing company in Badagry, and this was because they anticipated that when power generation ultimately became sufficient, there would be need to get power into homes, which called for buying of cable, transformers, and meters to measure the power.

The Governor also revealed that the Akute Power Plant now enables the powering of Iju Water Works and increases the utilization capacity of the water works, “Power that should have gone to Iju is now available on the grid for the supplier to deal with and distribute to the ordinary consumer”.

Governor Fashola further mentioned the Alausa Power Plant which he said had freed off 10megawatts of power demand by government from public power.

He noted, “Power is available on the grid and should go ordinarily to private citizens” and according to him, the same goes to the State House, High Court, Magistrate Court, 14 schools, adding that his government had supported some other public amenities that were not state owned, like churches, police formations amongst others.

He also mentioned that in about 6 years, his government had been able to develop three independent power plants, with two more to be completed in Lekki and Ikeja, and for the sustainability of its efforts, he urged that Nigerians should conserve power, “People must shut down appliances that they are not using , it saves money in your pocket.” He also emphasized the need to save water, urging the media to help preach the message.

Speaking on the Resident Registration Exercise, Governor Fashola stated that the exercise was essential and useful for the power sector and telecommunications, to enable them know where their customers and consumers are, noting that it would also require auditing.

“This exercise will require auditing of information for future purposes”, he said.

On the recent controversies surrounding the payment of toll at the Lekki area of Lagos, Gov. Fashola said that the Lagos State Government had appealed the court judgement stopping it from collecting toll at the Lekki-Ikoyi bridge, and had asked for an order to stay execution of the judgement. He explained that when a party is applying that the enforcement of a judgement should be stayed, it is technically a suspension of the enforcement of  that judgement until the court determines if the application would succeed.