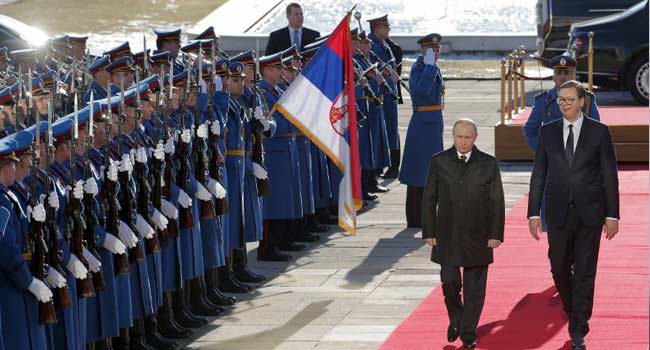 Russian President Vladimir Putin on Thursday called for stability in the Balkans during a visit to Serbia, a key Moscow ally in the volatile region.

After arriving to a rousing red-carpet welcome in Belgrade, Putin said Russia would back efforts to maintain calm.

“Russia, like Serbia, is interested in the situation in the Balkans remaining stable and not dangerous,” Putin told reporters at a joint news conference with Serbian President Aleksandar Vucic.

As part of the event, Vucic presented Putin with a puppy of the Sarplaninac breed, a shepherd dog from the region.

The Russian president’s visit was marked by tens of thousands of Serbs who marched through the capital in a parade in his honour.

“Welcome honoured President Putin, a dear friend,” read one of many billboards around the city bearing a mix of Russian and Serbian flags.

The parade culminated at the massive Saint Sava church, one of Orthodox Christianity’s largest houses of worship.

In recent days vendors have been selling T-shirts, mugs and books bearing Putin’s face, while a central Belgrade fountain has been lit up with the red, white and blue colours of the Russian flag.

No solution without Russia

Although Serbia aspires to join the European Union, it has kept up close ties with Russia, its historical “Orthodox big brother” whose people also share Slavic origins.

The affection for Moscow is fanned by its unyielding support on the emotive issue of Kosovo, a former Serbian province that broke away in a 1998-99 guerilla war.

Serbia has never accepted the split and Russia similarly rejects it, wielding its veto power at the United Nations to thwart Kosovo’s dreams of joining.

“Without Russia and due to Russia’s power in the UN Security Council it is clear that there will be no solution” over Kosovo, Vucic said.

EU-sponsored talks to normalise ties between Belgrade and Pristina have been stalled for months.

Putin said that to “achieve stability in the (Balkans) region, we have to find compromises and when they are found they should be respected.”

Before his arrival, Putin accused the West of “destabilising” the Balkans with efforts to expand NATO, an accusation that the United States often lobs in the direction of the Russian president.

In return for Moscow’s support over Kosovo, Belgrade has refused to join international trade sanctions imposed on Russia over its 2014 annexation of Crimea.

Graffiti saying “Kosovo is Serbia, Crimea is Russia” can sometimes be spotted on Serbian streets.

Putin is “Serbia’s salvation,” said retired general Mitar Petkic, who had camped for hours in front of the Saint Sava church to welcome the Russian leader.

“The EU is falling apart, when we will join it will not exist anymore,” the 66-year-old told AFP.

But the fanfare does not mask what Russia considers recent setbacks in the Balkans, where the West has increased its influence.

Moscow was unable to prevent Montenegro from joining NATO in 2017, a goal which Macedonia is also moving towards after ratifying a name change deal to end a decades-long dispute with Greece.

If Macedonia succeeds, seven countries bordering Serbia — which does not aspire to join — will be in the NATO sphere. Only neighbouring Bosnia will also not be a member, due to the veto of its Serb population.

The relationship between Serbia and Russia is “more an emotional than a rational” one, explained Serbian economic analyst Biljana Stepanovic.

According to a 2017 Serbian government survey, a quarter of the population believes Russia and the EU were the country’s joint top donors for development aid.

In reality, 75 percent of donations came from the EU or its member states, while Russia did not make the top nine.

The West also outpaces Russia in terms of direct investment and trade.

Moscow does, however, have some stake in the region.

He said Gazprom planned to increase its gas deliveries to the Balkans country by 2020.