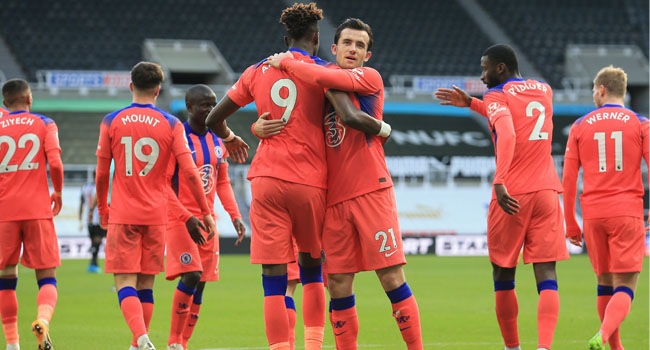 Chelsea made clear their intentions with a masterclass display 2-0 win against Newcastle on early Saturday afternoon at Saint James’ Park.

Frank Lampard’s men were without talismanic defender Thiago Silva who was deputized by the German Rudiger; also missing from the Chelsea ranks was Kai Havertz who was still in quarantine after testing positive for the COVID-19 virus.

Newcastle were also missing their leading goal scorer Callum Wilson, who suffered a hamstring injury against Southampton in the 2-0 defeat before the international break

An own goal from Newcastle’s centre back Federico Fernandez and a second-half finish from Tammy Abraham gave the visitors a comfortable win against opponents who barely threatened.

The duo of Werner and Abraham was making a nuisance of the Newcastle backline with waves of attack and the Magpies woes were further compounded by the replacement of their captain Jamaal Lascelles who took a blow late in the first half.

Chelsea finally put any hopes of a Newcastle come back to bed with a moment of magic from the German Werner who made light work of the Newcastle defence to lay an assist for Tammy Abraham.

The men in blue kept probing but were denied a third goal after Werner was deemed offside by the VAR. Two goals in favour of Lampard’s men was how it ended with Chelsea going top of the EPL log temporarily with Leicester and Tottenham yet to play.

Earlier, it was reported that Liverpool club management has been mum over the rumoured exit of their present manager, Kenny Dalglish. Now there is a new twist as the Merseyside club owners, Fenway Sports Group and club management confirmed that the contract of the former Anfield legend has been terminated.

The announcement came barely 24 hours after the former Liverpool player’s return from the United States assisted by his assistant coach to attend a meeting with John Henry and Tom Werner who are the principal owners.

“This is a price for failing to close the gap on the top four as the Reds finished the league with eighth position even after so much investment” Dalglish said.

The Scot was given a three-year contract a year ago but an inability to sufficiently close the gap to the top four despite a significant outlay on transfers appears to have persuaded Fenway Sports Group a change was required.

In a joint statement by Fenway Sports Group and the Club management it was confirmed that Dalglish is to relinquish his position as the manager of the Anfield club as his appointment has been terminated with immediate effect so as for change to be effected and the decision was not taken hastily.

Part owner Werner said they had made a tough decision to remove a man who is held in such high esteem at Anfield following his exploits as a player and manager in his previous spell in charge.

He acknowledged the effect the 61-year-old had had in putting things back in shape after a disastrous six months under Roy Hodgson but felt a change was required.

Despite winning the Carling Cup and reaching the final of the FA Cup the Reds’ league results were disappointing.

A 14th defeat of the season at Swansea on the final day of the season condemned the club to their worst league finish for 18 years and their lowest points tally (52) since 1953/54.

Prior to the start of the season Henry had suggested that Champions League qualification was the minimum requirement.

There had been progress made under Dalglish, who initially took temporary charge in January 2011 with the club dangerously close to the foot of the table after Hodgson failed badly.