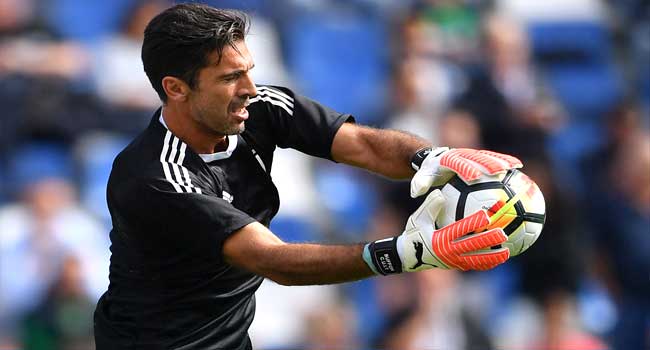 Polish goalkeeper Wojciech Szczesny will replace skipper Gianluigi Buffon as champions Juventus look to make it five Serie A wins out of five against Fiorentina on Wednesday.

Coach Massimiliano Allegri wants to rotate with an eye on Saturday’s Turin derby and Szczesny, who signed from Arsenal in the summer after two years on loan at Roma, will come in for Buffon a week after Juventus’ 3-0 Champions League flop in Barcelona.

“After the game with Barcelona I decided, together with Gigi, to play Szczesny in this game,” said Allegri.

“Szczesny is a player, a goalkeeper, worthy of the best seven or eight teams in Europe and he’ll be the heir to Buffon.

“That doesn’t mean I have more or less confidence. Given the congested fixture list we have at present, it’s important that every member of the squad plays their part and it’s great having two goalkeepers of such quality at my disposal.”

Allegri’s side have won four out of four league games so far this season to sit joint top with Napoli and Inter Milan, largely thanks to the incredible form of Argentine forward Paulo Dybala, who has scored eight goals.

But Fiorentina arrive full of confidence in Turin after kick-starting their campaign with back-to-back wins against Verona and Bologna.

“Fiorentina have brought through some fantastic young players into their ranks,” said Allegri.

“They will play without pressure tomorrow night, so we need to approach the match with the right level of respect and put in a solid performance, especially in defence, in order to pick up the three points.”

Napoli are also on a maximum 12 points and are top of the table on goal difference, but face a big test against Lazio.

For Napoli — who have the best attack in the league with 15 goals scored — the danger should come from forward Ciro Immobile, born in the suburbs of Naples, who has netted five goals in two Serie A games.

Inter Milan, the third team with maximum points, could take provisional pole as they play Bologna on Tuesday night.

Bologna are coming off their second defeat of the season — falling 2-1 at Fiorentina — to sit in 13th position.

AC Milan, in fifth after a loss among their three wins, host promoted SPAL, who are 14th.

Roma, who have a game in hand on the leaders, will be expecting nothing less than three points at tailenders Benevento. 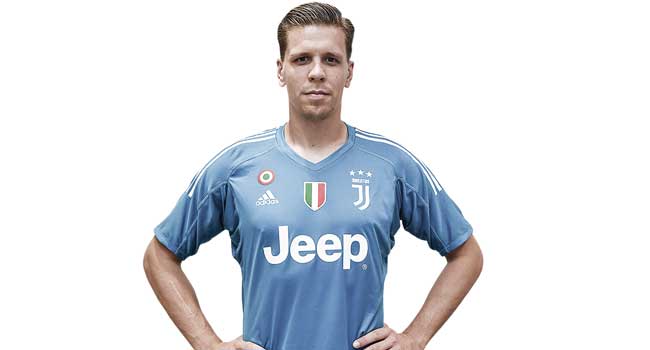 The 27-year-old finished the campaign with the cleanest sheets in the league, 14, one ahead of Gianluigi Buffon, Juventus’ first choice goalkeeper for the last 16 years.

Buffon, capped a record 169 times by Italy, renewed a contract with Juventus until 2018 last year and said that he is planning to retire after the 2018 World Cup.

Born in Warsaw in 1990, he spent his formative years with local side Legia Warsaw before moving to Arsenal as a 16-year-old.

After finding his feet in London, the Polish international made his debut in September 2009 in a 2-0 home win over West Bromwich Albion in the English League Cup. 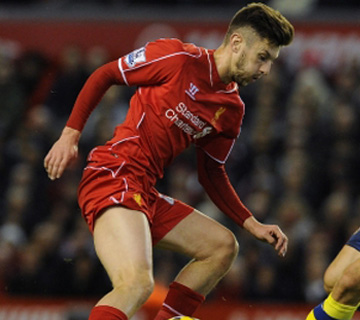 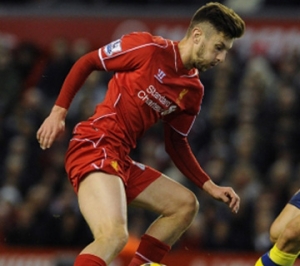 Adam Lallana says Liverpool were disappointed not to have turned a dominant display against Arsenal into three points, but believes Martin Skrtel’s 97th-minute equaliser could prove a defining moment in their season.

Liverpool came back with a Skrtel header deep into stoppage time to earn a well deserved 2-2 draw at Anfield on Sunday.

Lallana told Liverpoolfc.com: “I’m thoroughly disappointed we didn’t take all three points, but there was a good feeling about the whole atmosphere and the performance today – and it’s been like that for the last few games.

“We feel we’re turning a corner and getting a little bit of rhythm into our game. That goal was huge for us at the end because we would have been thoroughly disappointed with losing, but it was a point, a good performance and we move on.”

He spoke further; “Although we didn’t get the result, we picked up a vital point by getting a goal in the last minute and when we meet up again for training (on Monday) there won’t be that bitter disappointment at not putting in a good performance.

“We know we’ve played well, so there are encouraging signs and we’ll hopefully take that into the Burnley game.”

Liverpool at many times during the match, laid siege to Wojciech Szczesny’s goal, always threatening to score with the 3-4-3 formation believed to be helping them discover their attacking rhythm.

“We’ve found a system that the gaffer has changed and got us playing and I think it’s working,” said Lallana. “We’ve been creating a lot more chances, in the United game, Bournemouth game and today.

“We’re disappointed at conceding the first goal on the stroke of half-time. It probably gave Arsenal a little bit of momentum that could have been avoidable. But there was great character shown by the lads to keep pushing and get the vital goal at the end.”

The 26-year-old Lallana had a third successive start in the match, and turned in a good attacking display in supporting Raheem Sterling and he believes the new system has favoured him.

“I’m enjoying being on the pitch and playing in the system we have been playing,” he said.

“I feel it’s one of my best positions, but I am happy to play anywhere. I just feel I am becoming a bit more relaxed on the pitch now – and a relaxed Adam Lallana is probably when you’ll see the best of me.

“I’m happy with the way things are going on the field at the minute, but we just want to pick up more results.

“We’ve got a busy Christmas period and I feel if we can put in the performances we’ve shown over the last week, we’re not going to be too far away from picking up a lot of wins.”

Brendan Rodgers’ side can take positives into a festive run of matches that will see them face Burnley, Swansea City and Leicester City. 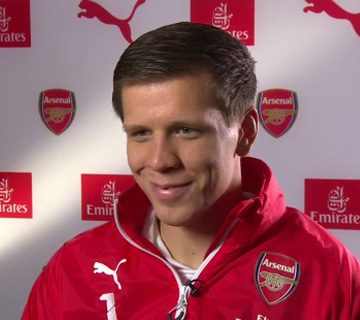 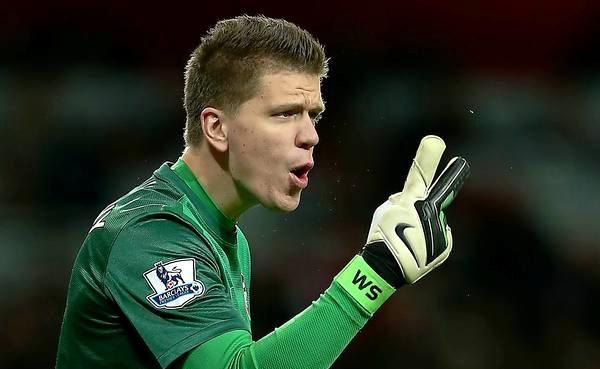 is confident Arsenal can get the result they need against Borussia Dortmund and qualify for the Champions League knockout stage.

He expressed his confidence in a chat with Arsenal.com.

“We all know that our last match in the Champions League at home to Anderlecht was disappointing,” Szczesny said, speaking ahead of the weekend. “But we must put that behind us and we’re all ready to bounce back against Dortmund and hopefully get a place in the last 16.

“Dortmund are a very good counter-attacking team. They press your midfielders very well and are quick to attack as soon as they get possession. They’ve got some great finishers as well, so going forward they are very strong.

“Last season we lost at home and won away, so we hope this season we can turn it around and get a result against them at home. We have confidence for Wednesday’s match knowing that we have recently beaten them. If we put in a good performance at home we know we can win.

“We know that we only need one point from our last two matches to qualify for the last 16, but we know that we have not made it yet. We’re playing at home in front of our fans and we’re confident that we can put in a good performance and qualify.”

The Gunners sit second in Group D after four games and only need one point from their last two matches to reach the last 16, but face a tough test against Dortmund on Wednesday before travelling to Galatasaray in December.

Arsenal goalkeeper Wojciech Szczesny has said that he is looking forward to end the week on a high with a victory over Manchester United at the weekend.

Arsenal, after losing to Chelsea in the League Cup seemed to be heading for a downward slide in their recent blistering form. However, they have bounced back with wins over Liverpool and Borussia Dortmund to put them in a strong position in both the English Premier League and the UEFA Champions League.

Another stern test beckons for the Gunners, as they will face Manchester United at Old Trafford on Sunday. Although this United team will be without the famous Manager, Sir Alex Ferguson, but they still represent a significant threat to the Gunners’ title ambition.

David Moyes has managed to overcome a poor start to the campaign to guide the club to 8 matches without a defeat, after coming under a lot of criticism for his poor displays at the start of this season.

Szczesny has said in an interview with Sky Sport “We are looking forward to Sunday now and we will be trying to make it a perfect week for us.

“There is not a better time for us to go to Old Trafford. We are very confident and enjoying our football, so we are looking forward to it.”

Arsenal have been previously criticised for not being defensively sound in the big matches, while they also appeared to lack resilience. 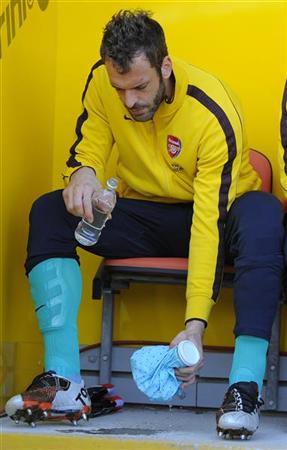 Almunia is one of seven new signings made by manager Gianfranco Zola and joins the London club on a one-year deal.

“The 35-year-old was released by the club this summer but will be training next door to his former team-mates in London Colney after agreeing a one-year deal with the Championship (second division) side.”

Almunia played 175 games for Arsenal including a substitute appearance in the 2006 Champions League final against Barcelona, but lost the jersey to Pole Wojciech Szczesny.

Watford were recently taken over by the Pozzo family who own Italian Serie A club Udinese and Spanish La Liga club Granada.

Other new arrivals include QPR defender Fitz Hall and several loan acquisitions from the fellow Pozzo family stable of clubs.