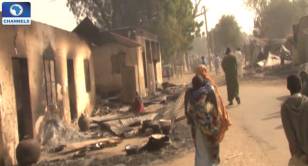 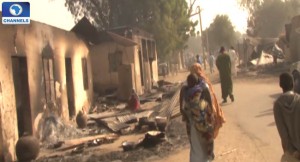 Benefiting communities were drawn from Gujba and Gulani local government areas worst hit by the rebellion as they converged on Bara the Local Government areas of the state.

The selected women were organized into savings and loan scheme and will work with cooperative associations for the success of the programme.

They were trained in different trades such as poultry production, soap making, knitting, cap making as well as groundnut oil production.

The VSF identified the beneficiaries based on their situations ranging from loss of husband, children, means of livelihood and poverty level among others.

Addressing the gathering, the Executive Director of Victim Support Programme, Professor Sunday Ochoche, said that the trust fund would work assiduously towards providing a solid means of livelihood for the returnees.

He also promised that “their critical economic challenges will also be addressed” and challenged the beneficiaries to “properly utilize the funds to scale up their businesses so as to help improve the lives of women generally”.

The Executive Director also revealed that the trust fund would soon return to the state for the rebuilding of Buniyadi.

“I wish to inform you that the Victims Support Fund (VSF) will soon return to Yobe state to flag off the rebuilding of Buniyadi, the capital of Gujba Local Government Area of the state.

“During the period we will engage in rebuilding destroyed houses such as the hospitals, the Local Government secretariat among several others” the Executive Director said.

The Yobe state Governor, Ibrahim Gaidam, represented at the occasion by the Commissioner of Women Affairs, Hajara Lawan commended the trust fund for coming to the aid of the distressed women.

He also praised other donor agencies for their various contributions in uplifting the conditions of the people.

The gravity of destruction caused to the state, according to the Governor, required huge support. He promised that his administration would continue to partner with relevant bodies to actualize the resettlement agenda.

“We wish to inform the VSF and the general public that the insurgency really affected us but together with the federal government, donor agencies among several others, we were able to come to the aid of the affected persons.

“I also wish to thank everybody who contributed and is contributing to the well-being of the displaced persons as a result of the Boko Haram insurgency,” The Governor said.

Some women at the occasion Halima Joda, Farida Yashe and Hauwa Howeidy expressed happiness for the gesture and praised the efforts of VSF for the initiative, describing the women empowerment gesture as magnanimous.

The VSF later visited selected farms cultivated by some returnees under the Agricultural Support Programme initiated by the trust fund.

VSF had given the chosen farmers fertilizer, and seedlings among other imputes at the beginning of the last raining season as a way of kick starting their means of livelihood.

The Executive Director expressed joy with the yield saying it has actually achieved the desired results.

The Niger State Governor, Abubakar Sani Bello has reiterated the commitment of his administration to the promotion and protection of the rights of every citizen especially the children.

Governor Bello gave the assurance at the 1 2 3 parade ground in Minna to mark the 2016 Children’s Day celebration.

He said that it was the primary responsibility as enshrined in the 1999 constitution of Nigeria and Child Right Act 2007 to protect and promote the rights of the children.

He warned parents and wards against violence against children which comes in many forms and usually causes physical and emotional harm to the growth and development of the child.

The Governor, represented by his deputy, Ahmed Ketso, directed the state’s Ministry of Women Affairs and Social Development to liaise with other relevant agencies to work out modalities so as to fight the scourge of child abuse, abduction and child labour in the state.

The Commissioner of Women Affairs and Social Development, Mrs Rose Sani, reminded the parents of their responsibilities towards the protection of the rights of the children.

She said that it is the duty of the parents to ensure that children are cared for, protected, free from fear so as to grow in peace.

Mrs Abara urged the children to rededicate themselves to be responsible citizens by respecting their parents, teachers, elders and constituted authorities.

She advised children to shun acts of violence, drugs and other forms of social vices just as they imbibe the spirit of hard work, honesty, patriotism and patience at all times.

The Nigerian Senate has highlighted the need to address the increasing cases of child abuse across the country.

This came ahead of the Children’s Day celebration on Friday, May 27.

The Upper Chamber made these resolution after a federal lawmaker, Senator Oluremi Tinubu raised a motion on the 2016 Children’s Day celebration.

Senator Tinubu had raised an alarm at the rising cases of violence against children in Nigeria.

She presented from the newspapers, the case of an 18-month-old boy who was allegedly attacked by his step-mothers and was left with broken limbs and injuries to his private parts.

She described the incident as disheartening and emphasized the need to ensure that the Senate enacts more laws to protect children and take all necessary steps to bring such violence to an end.

The Senate has also appealed to the Federal Government to ensure the rescue of the Chibok girls who are currently in the captivity of Boko Haram insurgents.

They also asked the joint committees on Women Affairs and Health, to visit Internally Displaced Persons’ camps and celebrate Children’s Day with the children there.