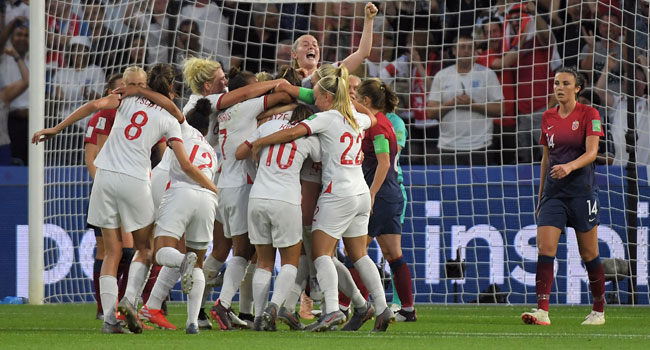 England secured their place in the semi-finals of the women’s World Cup after outclassing Norway 3-0 in their last-eight tie in Le Havre on Thursday.

Phil Neville’s team will face either France or the United States in the semi-finals next Tuesday. 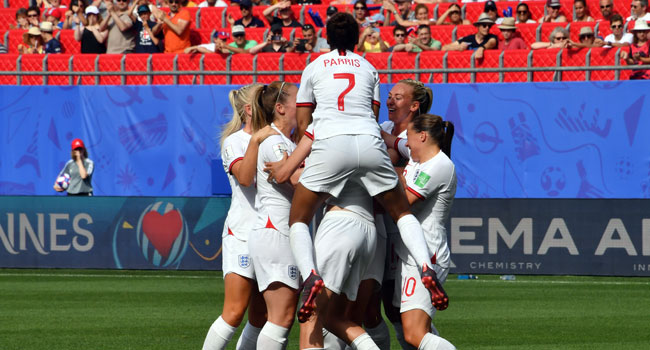 Captain Steph Houghton set England on their way to the quarter-finals of the women’s World Cup on Sunday with a 3-0 win over a Cameroon side who were left furious with several refereeing decisions and at one point appeared ready to walk off the pitch.

Houghton, Ellen White and Alex Greenwood scored the goals for England in a bad-tempered encounter watched by more than 20,000 fans in Valenciennes, and Phil Neville’s side go through to a quarter-final against Norway on Thursday.

However, this match will be best remembered for Cameroon’s protests to the Chinese referee as they went out in the last 16 for the second successive World Cup, and African interest in France came to an end.

They were left with a sense of injustice at the manner in which England’s opening goal came about in the 14th minute, and their anger reached boiling point when White’s goal to make it 2-0 in first-half stoppage time was initially disallowed for offside before being awarded after referee Qin Liang consulted with the Video Assistant Referee.

Their players surrounded the referee, pointing to the big screen replays of the goal and seemingly threatening to walk off the pitch.

Coach Alain Djeumfa persuaded them to carry on, but expressed his rage as he turned to the television cameras and appeared to shout: “It’s a shame, what is this?!”

Further confusion came just three minutes after the restart when Cameroon thought they had pulled a goal back to make it 2-1, but Ajara Nchout’s effort was eventually disallowed for offside after the referee had again consulted with the VAR.

The Indomitable Lionesses carried on but were outclassed by an England side who will nevertheless need to improve considerably from this performance if they are to win the World Cup.

Their early opener on a sticky evening at the Stade du Hainaut came after Cameroon goalkeeper Annette Ngo Ndom picked up what was adjudged to have been a backpass by Augustine Ejangue, although it looked to be nothing more than a poor piece of control from the defender.

Toni Duggan laid off the free-kick barely six yards out for Houghton to fire in, despite Cameroon placing every single player behind the ball.

England were laborious but increased their advantage through that controversial second goal right on half-time, with Lucy Bronze doing excellently to set up White, who fired in on her left foot for her fourth goal of the World Cup.

White was in line with the last defender when the pass was played, and the decision to let the goal stand was the correct one.

The next flashpoint came just after the restart as Nchout scored from Gabrielle Aboudi Onguene’s low ball into the box, but again VAR overturned the decision, this time disallowing the goal for offside.

Again it was the right decision, but again the Cameroon players protested vehemently. Neville approached Djeumfa to try to help calm his opposite number down, and play again eventually resumed.

England then wrapped up their victory when Duggan’s low corner from the left was swept home first-time by Greenwood in the 58th minute.

That ended any doubt about the final outcome, and the referee then opted not to give England a penalty after coming to review a possible foul on Fran Kirby in the box by Ysis Sonkeng, thereby avoiding the further wrath of the Cameroon players.