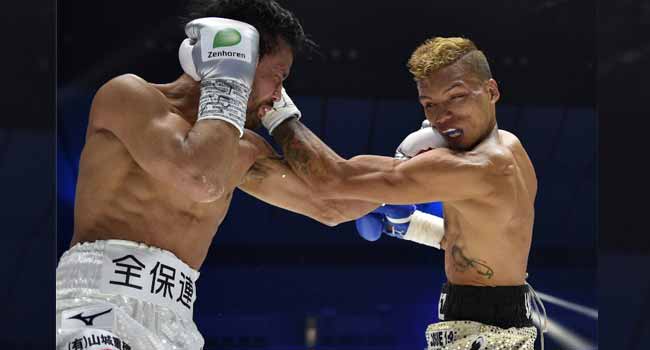 Japan’s Daigo Higa, aiming to break the national record for consecutive knockouts, was stripped on Saturday of his World Boxing Council flyweight belt for being overweight on the eve of his title defence, local media said.

The 22-year-old boxer was scheduled to fight Cristofer Rosales of Nicaragua on Sunday in Yokohama about two months after equalling the national record of 15 straight wins by knockout.

But Higa weighed in at 51.7 kilogrammes (114 pounds), exceeding the flyweight limit by 900 grammes (32 ounces), local media said, adding that he is the first Japanese champion to be stripped of the title because of a weight issue.

Despite the setback, however, Higa may be able to fight on Sunday after measuring his weight again and could still get the consecutive knockout wins record, news reports said.

Higa burst onto the boxing scene in 2014 when he knocked out Thailand’s Saengkeng Saknarong in less than a minute.

He clinched the vacant WBC flyweight world championship in May, defeating Juan Hernandez Navarrete from Mexico with a technical knockout in the sixth round.

His first defence came by technical knockout, when he stopped France’s Thomas Masson in the seventh round.

In February, he defeated Mexico’s Moises Fuentes in his second title defence, completing a 15th consecutive victory by knockout. 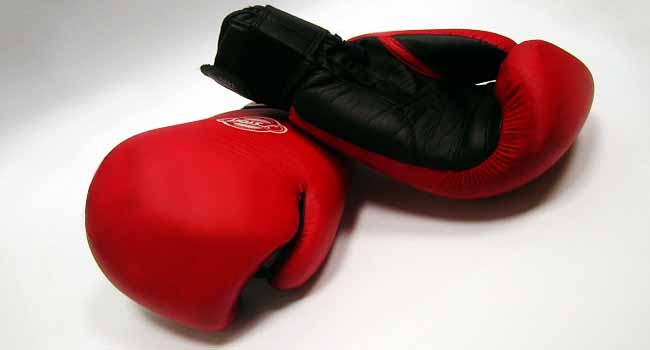 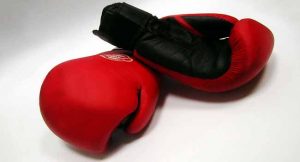 A super heavyweight title fight between Russian boxer Alexander Povetkin and Bermane Stiverne has been cancelled after Povetkin failed a drug test.

He was to fight Stiverne for the World Boxing Council (WBC), interim world title in the Russian city of Ekaterinburg.

Russian media reported that Povetkin’s team had tried to persuade Stiverne to go ahead with the fight despite the failed test but Stiverne had refused.

WBC President Mauricio Sulaiman, said via twitter that the WBC was officially withdrawing recognition of the Povetkin-Stiverne fight due to Povetkin’s drug test result.

The 37-year-old also missed out on a title bout with Deontay Wilder of the United States after testing positive for Meldonium.

In April, traces of the substance were seen after Povetkin had a doping test, although a repeat test returned a negative result.

Miguel Cotto has announced that he plans on trying to face WBC middleweight champion, Sergio Martinez, on June 7, in what he hopes can take place at Madison Square Garden in New York.

Cotto had a bigger offer of over $10 million made by Golden Boy Promotions to fight Saul “Canelo” Alvarez next on March 8, but Cotto likes the idea of fighting Martinez, because he has the WBC 160 lb. title in his possession and Cotto likes the idea of trying to capture a fourth division world title against the aging 38-year-old Martinez.

“I want to go with Martinez,” Cotto said via Fight Hype. “My history is at Madison Square Garden and I want to fight there. My priority is to seek a fourth title and we are hopeful that it will be against Martinez.”

It seems to be a better deal for Cotto because Martinez looked terrible in his last fight against a very average Martin Murray last April, and he’s to the point in his career where he’s suffering injuries during his fights.

In Martinez’s last fight against Martin Murray in April, Martinez broke his left hand and injured his knee again. Cotto is getting Martinez right at the perfect moment in his career to where he’s now beatable.

But why is Cotto avoiding to fight WBA champion Gennady Golovkin? If Cotto’s idea is try and accomplish something really big that would make his mark in boxing, then it would seem like the still in his prime Golovkin would be the much better option for Cotto.

What does Cotto do if he wins the fight against the still healing Martinez? Does he choose to defend the title against the less than appealing contenders like Marco Antonio Rubio and Domenica Spada, or does he vacate the belt and go back down to 154 to try capturing a title at that weight?

It might be better for Cotto to stay at 160, because the WBC has mostly weak contenders ranked in their top 15, and Cotto can probably keep the WBC title for a long time as long as he doesn’t try and fight Golovkin, who would probably knock him out easily. It’s looking like Cotto will ever face Golovkin.

The World Boxing Council has declared that Chris Arreola and Bermane Stiverne will fight for a second time to decide the new heavyweight champion.

Canadian Stiverne, the WBC’s number-one ranked contender to Vitali Klitschko before the Ukrainian stepped away from boxing for politics, claimed a unanimous decision over American Arreola in April.

Arreola dropped Seth Mitchell in September inside the opening round to bounce back from the defeat and establish himself as the number two challenger.

Both boxers will meet again after their first encounter, with Vitali’s brother Wladimir who holds every other recognized world heavyweight title – waiting in the wings after declaring his intention to unify the division shortly after his older brother decided to leave boxing.

The last time Vitali’s fought was on September 8, 2012 against Germany’s Manuel Charr.

The Ukrainian won the fight via technical knockout when Charr had to be stopped due to a cut received from his opponent.

The former WBC heavyweight champion was expected to face Bermane Stiverne in a mandatory title defence, but was forced to pull out due to injury.

British fighters Tyson Fury and Dereck Chisora and unbeaten American, Deontay Wilder, are other heavyweights hoping to be in contention for the WBC heavyweight title. 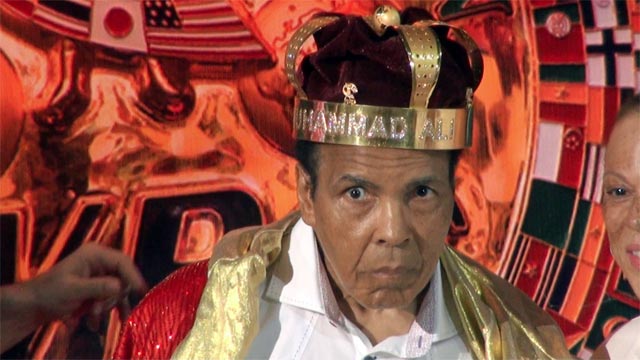 Former heavy weight boxing champion, Muhammad Ali will be named the ‘King of Boxing’ at the 50th convention of the World Boxing Council (WBC)

The event will begin Monday December 3-8 in Mexico’s Caribbean coastal resort of Cancun and will have over 100 champs and ex-champs to attend the convention.

The “crowning” of Ali will be one of the main events at the convention celebrating the 50th year of the WBC, which is headed by Mexican Jose Sulaiman.

Mr Sulaiman who has been the WBC president since 1975 mentioned that “It will be recognition for an entire life of greatness, there is nobody in the world who has done what Ali has done.”

He added that Ali deserved the honor “which he needs more” at this point in his life.

The former world champion has suffered from Parkinson’s for years. 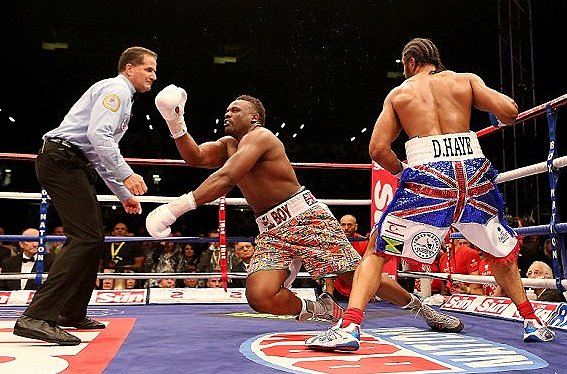 Haye, a former heavy weight and cruiserweight initially lost one of his world titles to Wladimir Klitschko, little brother to Vladimir and he was criticised for not showing a good performance despite his claims that he had a broken nose before the fight.

But David Haye managed to do what Vitali failed to do in the last defence of his World Boxing Council (WBC) heavyweight title in February which is knocking out Chisora.

But Haye felt an amount of redemption after twice leaving Chisora slumped on the canvas at Upton Park, from left hooks and hopes it will earn him another crack at a Klitschko.

Wladimir, who holds three of the world title belts, insists he is not interested in a rematch with Haye for the moment.

Vitali, who holds the other world title belt, was linked with a defence against Haye earlier this year.

But WBC champion Vitali’s next challenger on September 10 is Germany-based Syrian Manuel Charr, who gate-crashed the Haye-Chisora post-fight press conference to announce he would be prepared to fight Haye once he beats the WBC champion.

Haye, however, expects Vitali to prevail and hopes to face the Ukrainian later this year or in 2013.

“If Vitali beats this gentleman [Manuel Charr] I would love to challenge him for his title. If it’s not meant to be, so be it.

“If this was my last performance, I have gone out with a bang and everyone is happy. After a performance like that and him getting on, if you were one of his advisers you wouldn’t tell Vitali to fight me.

“I’ve proved my punching power against someone who pushed Vitali to the wire. It was a measuring stick to show how I performed against his last opponent.

“I would be very confident of beating Vitali.”

Vitali, 40, may well retire after facing Charr to pursue a full-time political career, which would leave Haye trying to convince Wladimir, 36, to give him a rematch.

Haye’s rediscovered his knockout power – he has stopped 24 of 25 opponents – against Chisora and was well ahead on all three scorecards at the time of the stoppage, with one judge scoring it 40-36 and the other two seeing it 39-37.

But Haye had to take some shots from Chisora, who kept marching forward until he was caught by a brilliant left hook in the fifth round. Another quick right sent Chisora stumbling backwards onto the canvas.

He got to his feet at the count of seven but after a ferocious onslaught, he was left open and Haye seized his chance with a swinging left hook to the jaw.

This time, referee Luis Pabon waved the contest over as Chisora sluggishly got to his feet.

But after the distasteful pre-fight trash-talk, which followed the pair’s punch-up at a press conference following Chisora’s point’s loss to Vitali in February, the two Londoners embraced in the ring.

Haye then paid tribute to Zimbabwe-born Chisora, who has lived in London since the age of 16.

“It was tough,” he said. “I thought it would be easier than it was but I trained for it to be tough. I trained for the best Dereck Chisora and that guy turned up.

Chisora, 28, will pay Haye #20,000 for him to donate to a charity after the pair had a bet on their fight for the minor World Boxing Association (WBA) and World Boxing Organisation (WBO) International heavyweight titles.

“For a split second I didn’t concentrate and it was the sort of shot that puts you down,” said Chisora.

“Vitali has not got power and isn’t interested in fighting anymore, so David probably wins.”